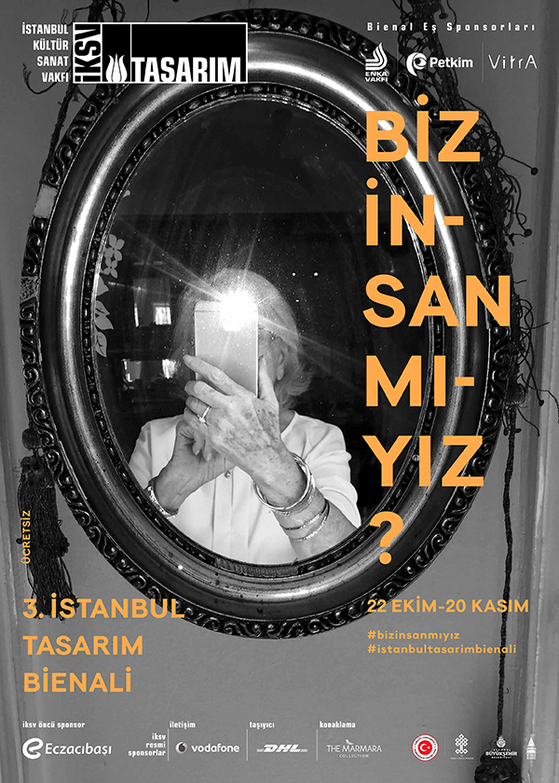 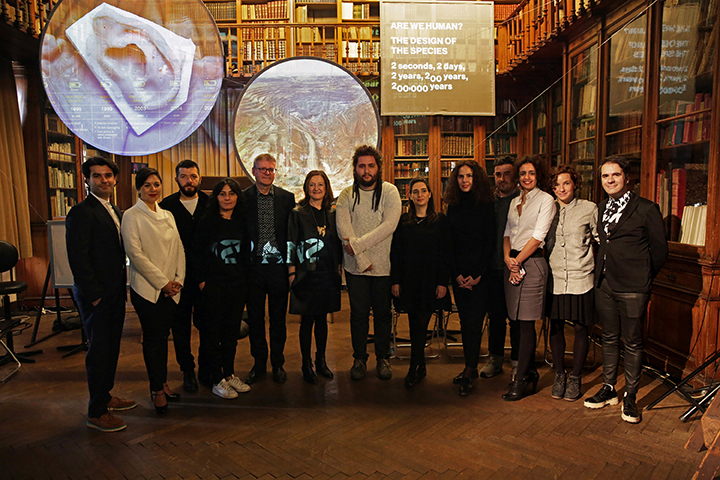 Earlier this week, the program for the 3rd Istanbul Design Biennial, "Are We Human?," was announced. The show will take place from October 22-November 20, 2016 and is co-curated by Beatriz Colomina, Professor at Princeton University's School of Architecture and Co-Director of the Media and Modernity Program. The biennial will present more than 70 projects from five continents and several islands by designers, architects, artists, historians, archaeologists and scientists in five main venues: Galata Greek Primary School, Studio-X Istanbul and Depo in Karaköy, Alt Art Space in Bomonti, and Istanbul Archaeological Museums in Sultanahmet. Princeton School of Architecture faculty involved in the biennial include Beatriz Colomina, Lucia Allais, Eyal Weizman, Spyros Papapetros, Axel Kilian, Andrés Jaque, Elizabeth Diller, Michael Meredith, Paulo Tavares, and others (see detailed list below).

Student involvement has so far centered on two history and theory seminars on design led by Professor Colomina, collaborative and independent research projects carried out by students, including Alfredo Thiermann on the "limits of human design" in Antarctica, and projects initiated in Andrés Jaque’s design studio by students such as Igor Bragado and Miles Gertler on the design realities of death.

During the summer, a student team from Princeton's School of Architecture and the Department of Art and Archaeology assembled to develop six curatorial interventions to be exhibited in the Biennial: The Unstable Body, Are We Normal?, Enclosed by Mirrors, Homo cellular, Design in 2 Seconds, and Design has Gone Viral. The students involved in these projects are Ivan-Nicholas Cisneros, Diana Cristóbal, Nazli Ercan, Jessica H. Ngan, Mercedes Peralta, Bart-Jan Polman, and Weiwei Zhang.

The exhibition architecture has been designed by Visiting Professor Andrés Jaque and the Office for Political Innovation. PhD student Evangelos Kotsioris is the Assistant Curator of the biennial while the online dimensions are being directed by PhD student Iván López Munuera.

Lucia Allais (Assistant Professor, History and Theory of Architecture, Princeton SoA)
Mixed Being
The project regards the recreation of the archaeological experience of standing amidst a field of fragments using the archival material from the re-constitution of the site of Karatepe, a late Hittite fortress in close to the district center of Kadirli in Turkey.

Pedro Alonso (Princeton-Mellon Fellow, Princeton SoA)
Archaeology of Things Larger than Earth
This contribution looks at "digging into the traces" of the first U.S. global satellite-tracking network, the Minitrack: a large technological system designed and developed by the Naval Research Laboratory under. Minitrack was a chain of nine tracking stations built between 1956 and 1957 by the U.S. Army along the South American continent, in order to get signals from the Vanguard satellite as it crossed the 75th West Meridian on each orbit.

Igor Bragado (Spain), Miles Gertler (Canada)
Going Fluid: The Cosmetic Protocols of Gangnam (Common Accounts)
This project examines the architectural, infrastructural, and urban technologies of plastic surgery clinics in Seoul; attendant technologies that allow the human to participate in and shape the urbanism during the post-op process.

Elizabeth Diller (Professor, Architectural Design, School of Architecture)
Unspoken (Diller Scofidio + Renfro)
Unspoken is a split screen narrative that interweaves an intimate dialogue with involuntary physiological effects to investigate blushing as an indication of the human condition. The audience is positioned awkwardly between, overhearing and overseeing what's spoken and unspoken.

Urtzi Grau (PhD candidate, School of Architecture)
Portable Indo Pacific (Fake Industries Architectural Agonism)
This participation aims to construct that the missing narratives of the Indo-Pacific region through and with architecture. Oral stories of the region accompany the maps, exacerbating the their clashes with other installations in the show.

Axel Kilian (Assistant Professor, Computational Design, director of Embodied Computation Lab, School of Architecture)
Embodied Computation
This project is a reflection on the changes in design as computation expands beyond self-contained abstract processes. Embodied Computation seeks to challenge to the notion of physical form as the primary carrier of design intent and instead emphasizes the continuity of the design process into the deployed state as a process of continuous adaptation.

Michael Meredith (Assistant Professor, Architectural Design, School of Architecture)
An Unfinished Encyclopedia of Scale Figures Without Architecture (MOS Architects)
This project attempts to collect various architects' representations of life into a single document and has involved the collection of over 2,000 figures produced by over 200 architects.

Spyros Papapetros (Associate Professor, History and Theory of Architecture, School of Architecture)
Frederick Kiesler’s Magic Architecture: Caves, Animals, and Tools from the Prehistoric to the Atomic Era
This project is a reflection on Frederick Kiesler’s research material for his unpublished book project titled Magic Architecture, Its Origin and Future: The Story of Human Housing (ca. 1945). Starting with the design of man’s indiscriminate diet as opposed to other animals’ more restricted nutrition plan, Kiesler traces the transformation of the human’s limitless appetite into a drive for territorial expansion.

Alfredo Thiermann (Post-Professional M.Arch, Princeton School of Architecture)
White on White
White on White was produced in the context of a month-long artist-in-residence program in Antarctica. It is a project that looks at Earth’s Southernmost inhabited continent, Antarctica. This project investigates the "design of the human" but also the "limits of human design." Antarctica is here explored as a "designed territory," humanized for a particular kind of new human.

H. Sebastion Seung (Professor, Neuroscience Institute and Computer Science Department; Principal Investigator, Seung Lab—Computational Neuroscience, Princeton University)
The Connectome: A New Dimension of Humanity
Our brains provide us the ability for shared experiences — love, laughter, empathy — via the personal channel of self. This multi-media interactive installation takes visitors on a journey across scale through the brain, from the small world of synapses to the larger connectome network of the brain of which they are a part.

Paulo Tavares (Visiting Associate Professional Specialist in the Princeton Program in Latin American Studies)
Archaeology of Violence (The Forest as Design)
Archaeology of Violence is an excavation into the ruins of Amazonia, ruins of modernity, colonialism and the forest’s deep past. These spatial and visual sherds tell the violent history of erasure of indigenous modes of life and inhabitation, and at the same time they are also records of the Anthropocene. Global climate change is mapped as a product of design, but also a radically different, dissident image of the nature of Amazonia is constructed, one in which the forest appears as an “urban”, cultural-political design in its own terms.

Evangelos Kotsioris (PhD candidate, Princeton School of Architecture)
Voyager—Humanity in Interstellar Space (Universal Space Program)
The Voyager 1 and 2 space probes bears on its backside a copy of the Voyager Golden Record: an audio-visual introduction to “Life on Earth.” This project aims to examine the Voyagers as archaeological objects of human life in interstellar space and the contents of the records as humanity’s potential ambassadors to extraterrestrial forms of intelligent life.

Ivan L. Munuera (PhD candidate, Princeton School of Architecture)
CHROMANOIDS. A chit-chat on humans, non-humans and everything in-between
CHROMANOIDS is an interview-driven chroma/podcast with the participants of the 3rd Istanbul Design Biennial Are We Human? The Design of the Species. 2 seconds, 2 days, 2 years, 200 years, 200,000 years. Each program consists of a 15 minutes lively conversation to delve into the projects contained in the exhibition, the career of the participants and the design of the human. Interviewees include Keller Easterling, Madelon Vriesendorp, Atif Akin, John Palmesino, Laura Kurgan, Spyros Papapetros, Eyal Weizman, Thomas Keenan, Sohrab Mohebbi, François Dallegret, Rana Salam, Jussi Parikka, Annett Zinsmeister, David E. Benjamin, Lydia Kallipoliti, Antoni Muntadas, Lesley Lokko, V. Mitch McEwen, and Mark Wasiuta, among many others.

Read about the book launch of Are We Human? Notes on an Archaeology of Design by Beatriz Colomina and Mark Wigley.

Learn more about "Are We Human?," and subscribe to the show's newsletter, Superhumanity, here.