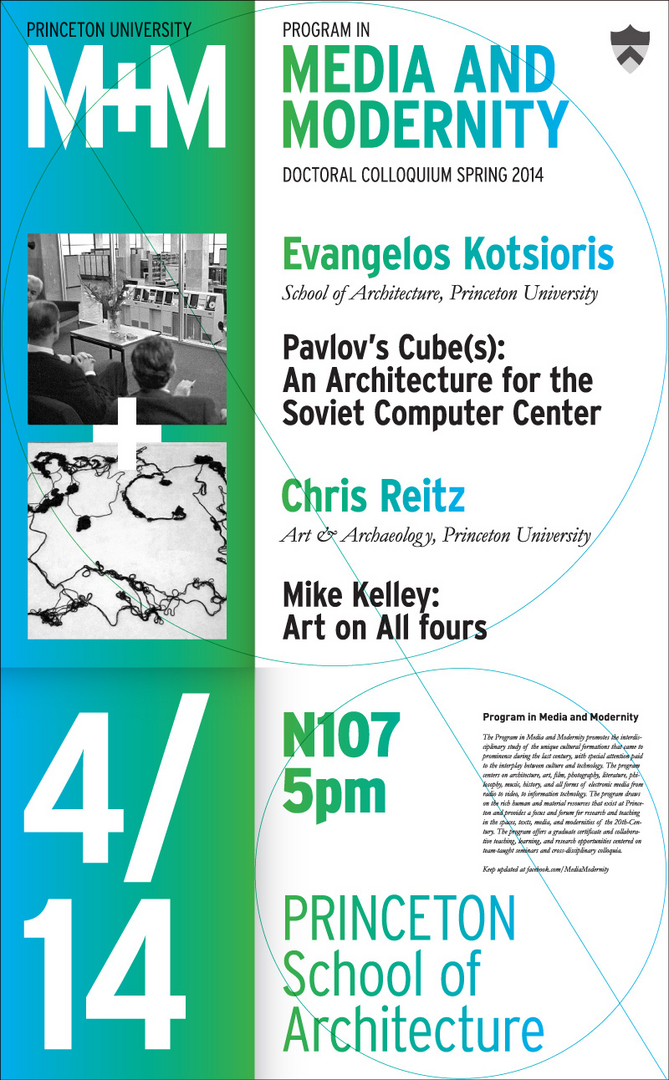 Evangelos Kotsioris is an architect and PhD candidate in the History and Theory program at the Princeton School of Architecture. His current research interests include the intersections of architecture with science, technology and media. His dissertation, entitled Komp’iuter Architecture(s): 195X-198X, seeks to compose an architectural history of computerization during the Cold War, by focusing on the introduction, dissemination and use of the digital electronic computer in the Soviet Union and the Eastern Bloc between the late 1950s and the early 1980s. Evangelos has taught at Harvard GSD, Princeton SoA, the BAC and The Cooper Union. He has authored and co-authored articles and chapters for edited volumes, catalogs, and journals such as The Architectural Review, New Geographies, Conditions, On Site, Pidgin and Uncube.

How to imagine a previously non-existent architectural typology—that of the networked computer center? During the Cold War, Soviet architect Leonid Pavlov was invested in answering this question. A student of Ivan Leonidov, Pavlov studied a series of high profile computer centers for state institutions in Moscow. This talk will focus on his realized design for the Main Computing Center (MCC) of the State Planning Committee of the USSR (1966-74). Pavlov and his peers had to operate within the broader paradoxical regime dictated by the Cold War, in which state computers had to be a technology simultaneously “secret” and “on display.” The otherwise inaccessible building for the MCC provided an aestheticized image of Soviet progress in the use of computing technologies through its frequent appearances in newspapers, newsreels, architectural journals and even schoolbooks. Before fulfilling any of the utilitarian requirements for the computers it housed, I argue, Pavlov’s cube-like modernist prototype had to—first and foremost—serve as a spatial device for the mediatization of Soviet computerization.

Chris Reitz is a curator, critic, and PhD candidate in modern and contemporary art in the Department of Art and Archeology at Princeton University. His dissertation, Martin Kippenberger and Mike Kelley; Artist Personae and the Precarious Middle Class, explores the work of the titular artists in the context of postwar globalization, specifically with respect to the burgeoning international art market. His writing has been published by N+1, Texte zur Kunst, and Art-Agenda, and as part of a number of exhibition catalogues. Prior to arriving at Princeton he was Project Manager for Public Art Fund, New York.

Adopted by Los Angeles as a native son (though born in Detroit), Kelley is equal measure counterculture hero and blue chip brand. He was a founding member of the influential noise rock group Destroy All Monsters, a key figure in the US-West German gallery network that developed in the 1980s, and a regular touchstone for psychoanalytically-engaged critics and historians (Lacanians, Batailleans, abjectionists, etc). His artwork seems to embrace both the countercultural and the scatological—his work from the 1990s is peppered with joking references to Bataille, for example. Yet in his writing about art, Kelley rejects his critics at every turn. My talk maps this split persona though Kelley’s best-known project, Half a Man (1987-93). Arguing that his infantile sensibility emerged in response to the social and economic failures of his native Detroit, I describe how his boundary transgression and regressive tendencies mirrored concurrent political and economic calls for a “return” to classical liberal capitalism and for the international boundary transgression of “free trade.”

Keep updated on future events at: facebook.com/MediaModernity.
To be removed from this mailing list, reply with "Unsubscribe" as subject.