Please join us on Tuesday, March 12, 2013, 5pm at Room N107 in the Princeton School of Architecture for this year's first M+M Doctoral Colloquium with Priyanka Anne Jacob and Daniela Fabricius:

"In this presentation, I take a closer look at the paper clue so often scattered across the pages of the mid-Victorian sensation novel. M.E. Braddon’s 1862 novel Lady Audley’s Secret, especially, depends on collections of paper objects—half-torn telegrams, tell-tale letters—in the piecing together of the crime. The unique role of paper in these sensational collections invites further analysis of paper’s role in the storing and transmitting of secrets.  Working against the critical tendency to treat paper objects in literature exclusively as figures for the text, I argue that every piece of paper in a novel need not drive us inexorably to textual metaphors. Instead I examine these objects in their material specificity and in the context of a late-nineteenth-century culture in which paper had many uses beyond the literary. In Braddon’s work, paper acts both as a medium—a container for information—as well as a material container, literally wrapping the most precious objects of a novel obsessed with the keeping of secrets. Meanwhile paper’s double-sided value complicates our sense of what that keeping might mean. Paper is the substance of litter and the archive, of the scrap and the keepsake; with its continual movement towards disposal and its paradoxical resistance to destruction, paper forms the quintessential clue—that stubborn remnant of an act, the scrap that lingers on the scene.  In its disposability and persistent presence, paper troubles the distinction between the keeping and discarding of things."

Priyanka Anne Jacob is a PhD candidate in the English department, and her dissertation is titled "The Art of the Hoard: Secrets, Keepsakes, and Lingering Things in the Victorian Novel." She has a BA in English and Women & Gender Studies from Amherst College. She co- runs the Victorian Colloquium in the English Department and is a Graduate Student Delegate to the MLA.

Frei Otto strove for near-dematerialization in his structures, an ideal of lightness that was best encapsulated by his famous soap film experiments. Soap film structures were almost mathematically incalculable at the time Otto began working with them in the 1950s. By the 1960s the creation, measurement, and calculation of minimal forms had become a major focus of his research. Scientific photography in particular was key in the quest to create a perfect index of the ephemeral forms, which because of their near-immateriality are especially difficult to document and accurately measure. In order to overcome this imprecision the model had to be placed within a framework in which space (and atmosphere) was already constructed as measurable, where a total and precise coordination between object, camera, lighting, and background was possible. These devices for making and measuring models increasingly came to take precedence over the models themselves, eventually suggesting a new type of space. In the process of creating and capturing incalculable forms for architecture, Otto effectively turned material into data. In these experiments Otto developed not only new forms but also a new language and aesthetic of architectural representation, challenging the conventions of the architectural model in particular. For Otto the incalculable suggested a formal limit that he tries to both overcome and continuously expand in experiments with not only soap films but also optimized path systems, structures too small or large to physically measure, and the interiors of the living bodies of animals and humans. A dialectic played itself out between the incalculable and the calculable as Otto turned to science and eventually computation to expanded the limited geometric and structural imagination of modern architecture.

Daniela Fabricius is a PhD Candidate in Architecture at Princeton University. She holds an M.Arch from Columbia University, and a BA from Brown University in Visual Art and Comparative Literature. She has taught at Cornell, the University of Pennsylvania, and Pratt. Her essays have appeared in Log, Harvard Design Magazine, Stadtbauwelt, The Journal of Architectural Education, and AD. In 2012 she received a DAAD grant for her current research on the themes of calculation and risk in West German architecture in the 1960s-80s. 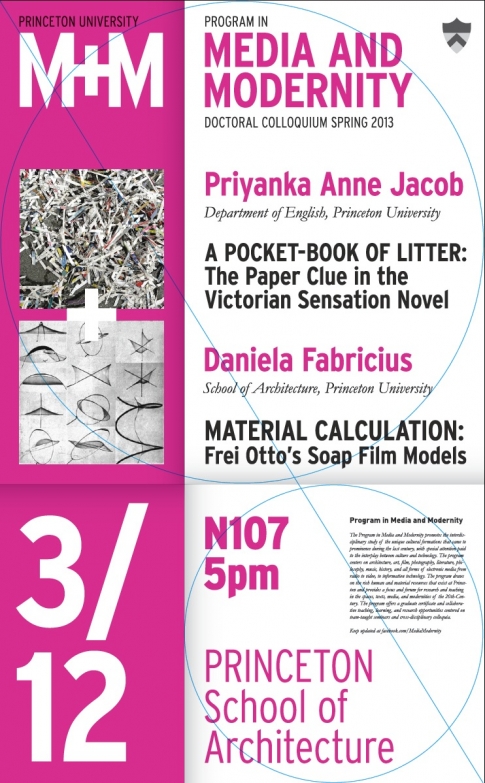