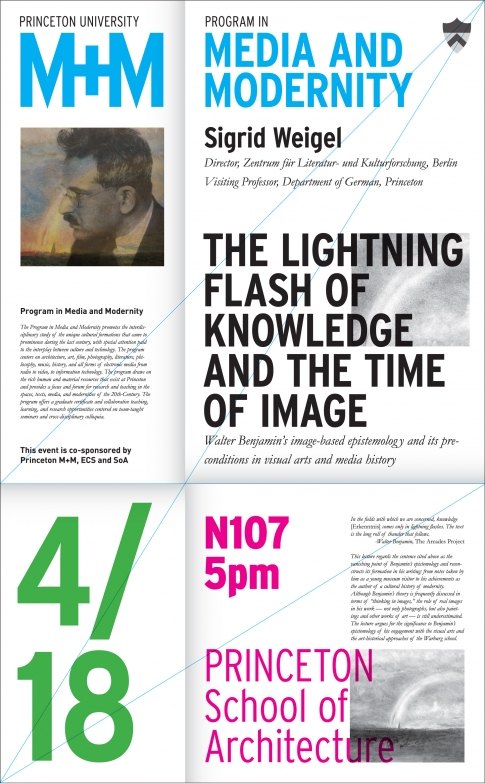 Media and Modernity  |  Sigrid Weigel  |  The Lightning Flash of Knowledge and the Time of Image: Walter Benjamin's image-based epistemology and its pre-conditions in visual arts and media history

"In the fields with which we are concerned, knowledge [Erkenntnis] comes only in lightning flashes. The text is the long roll of thunder that follows."
-Walter Benjamin, The Arcades Project

This lecture regards the sentence cited above from as the vanishing point of Benjamin’s epistemology and reconstructs its formation in his writing: from notes taken by him as a young museum visitor to his achievements as the author of a cultural history of modernity. Although Benjamin’s theory is frequently discussed in terms of “thinking in images,” the role of real images in his work — not only photographs, but also paintings and other works of art — is still underestimated. The lecture argues for the significance to Benjamin’s epistemology of his engagement with the visual arts and the art-historical approaches of the Warburg school.

Sigrid Weigel is the Director of the Zentrum für Literatur- und Kulturforschung, Berlin and Visiting Professor at the Department of German at Princeton University.