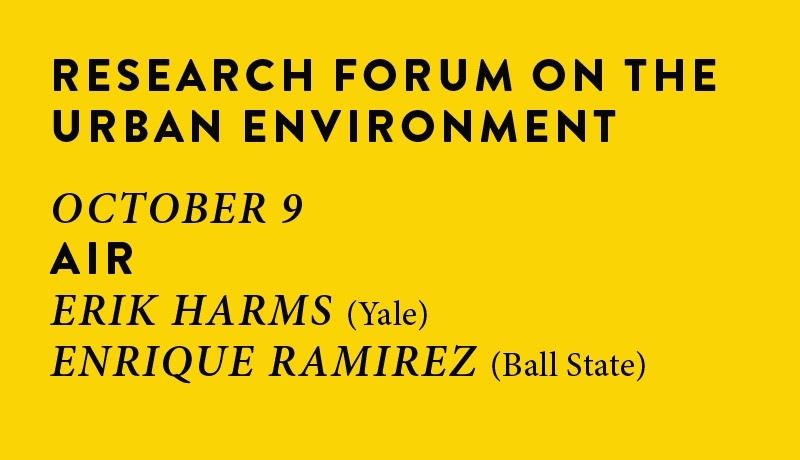 Air – the least concrete of materials – forms a key point of concern for planners and architects. The flow of air brought health and a respite from pollution, just as air travel lent the city a cosmopolitan edge. But such notions are deeply embedded in ideas of sociality, health, aesthetics, and modernity. This forum engages with these concepts by bringing together anthropologist Erik Harms, whose work looks at new, “green”, urban zones in Ho Chi Minh City, and Enrique Ramirez, whose work has addressed the interrelation between architecture and flight in France.

Erik Harms is Associate Professor of Anthropology and South Asian Studies at Yale University. His ethnographic research in Vietnam has focused on the social and cultural effects of rapid urbanization on the fringes of Saigon—Ho Chi Minh City. His book, Saigon’s Edge: On the Margins of Ho Chi Minh City (Minnesota Press, 2011), explores how the production of symbolic and material space intersects with Vietnamese concepts of social space, rural-urban relations, and notions of “inside” and “outside.” More recently, his work has focused on the uses and abuses of “culture” and “urban civility” in urban Vietnam, and how this civilizing discourse entwines with spatial action in ways that legitimize broad-scale privatization.

Enrique Ramirez is scholar and historian of modern and contemporary architecture. He has written on the shared domains between architecture culture, the visual arts, and the physical and environmental sciences since the 18th century. His research projects include "Thomas Pynchon and the Environments of Global Fiction,"  which uses Pynchon's historical novels to frame issues of architectural and environmental history from a distinctly global vantage point. Enrique currently teaches architectural history at Ball State University's College of Architecture and Planning. He is a member of the Global Architectural History Collaborative and an advisory editor to Manifest: A Journal of American Architecture and Urbanism. Since 2006, he has been the author of this is a456, a quasi-architectural blog.