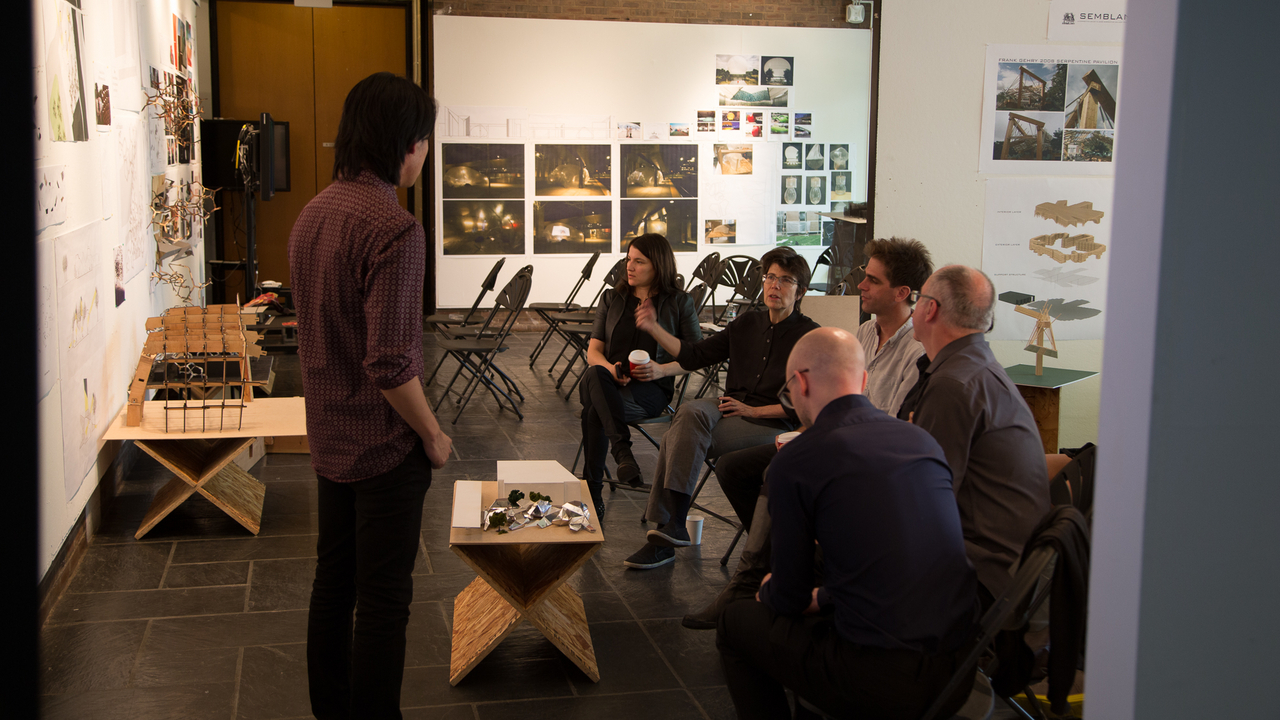 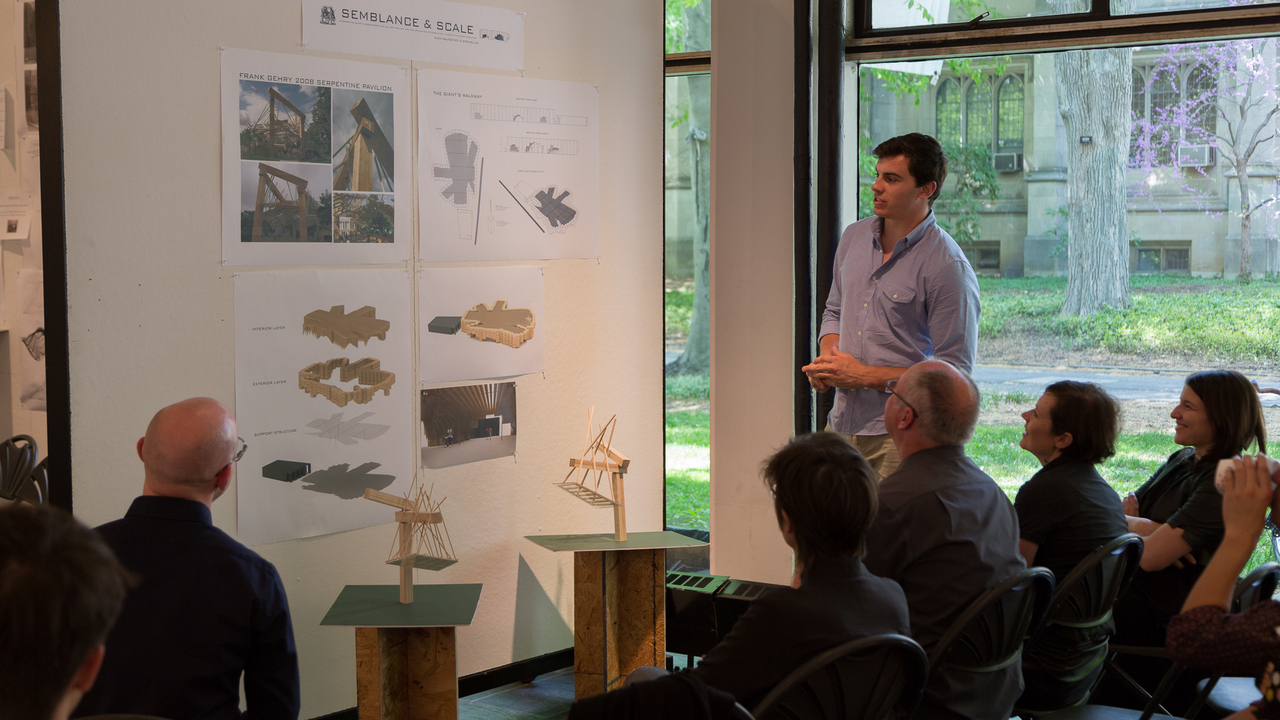 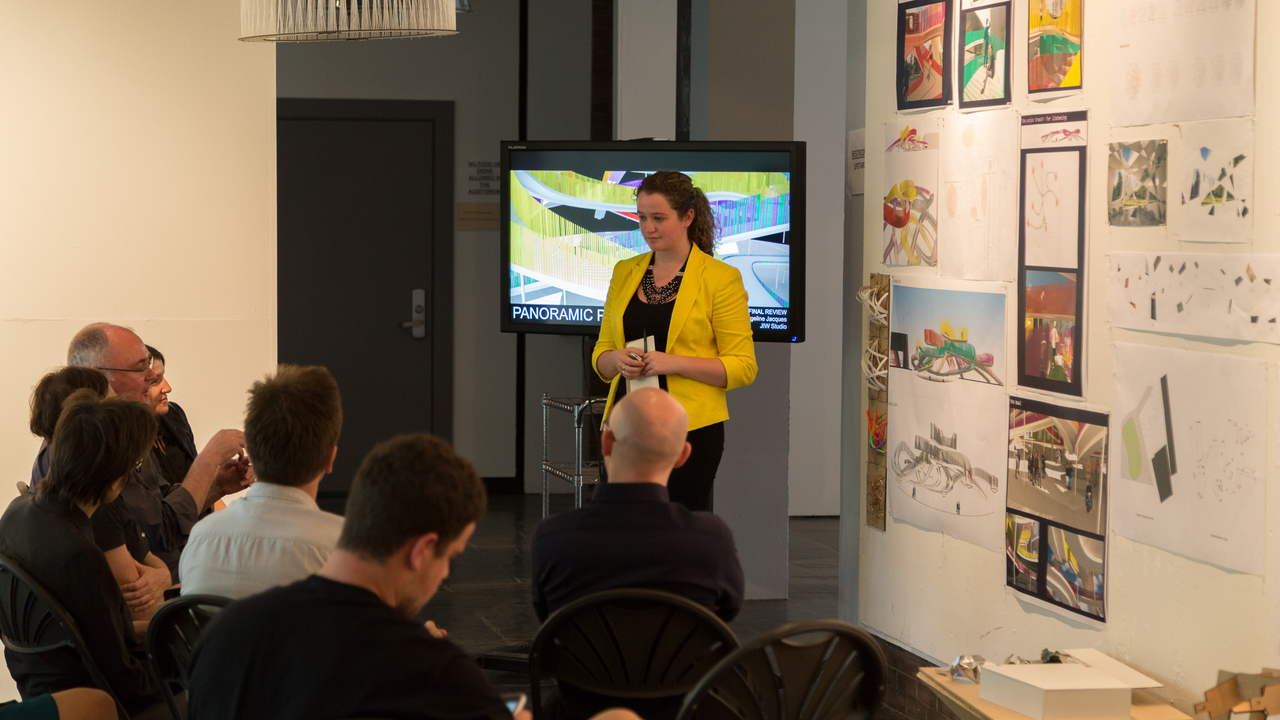 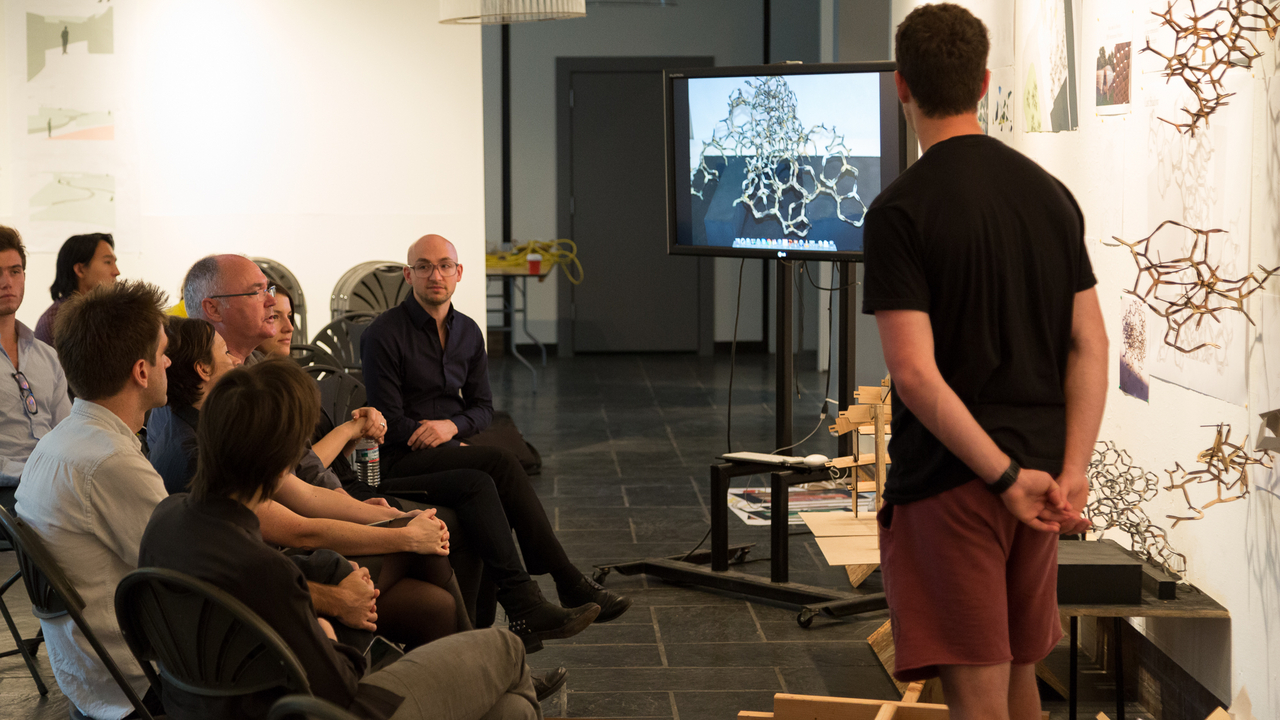 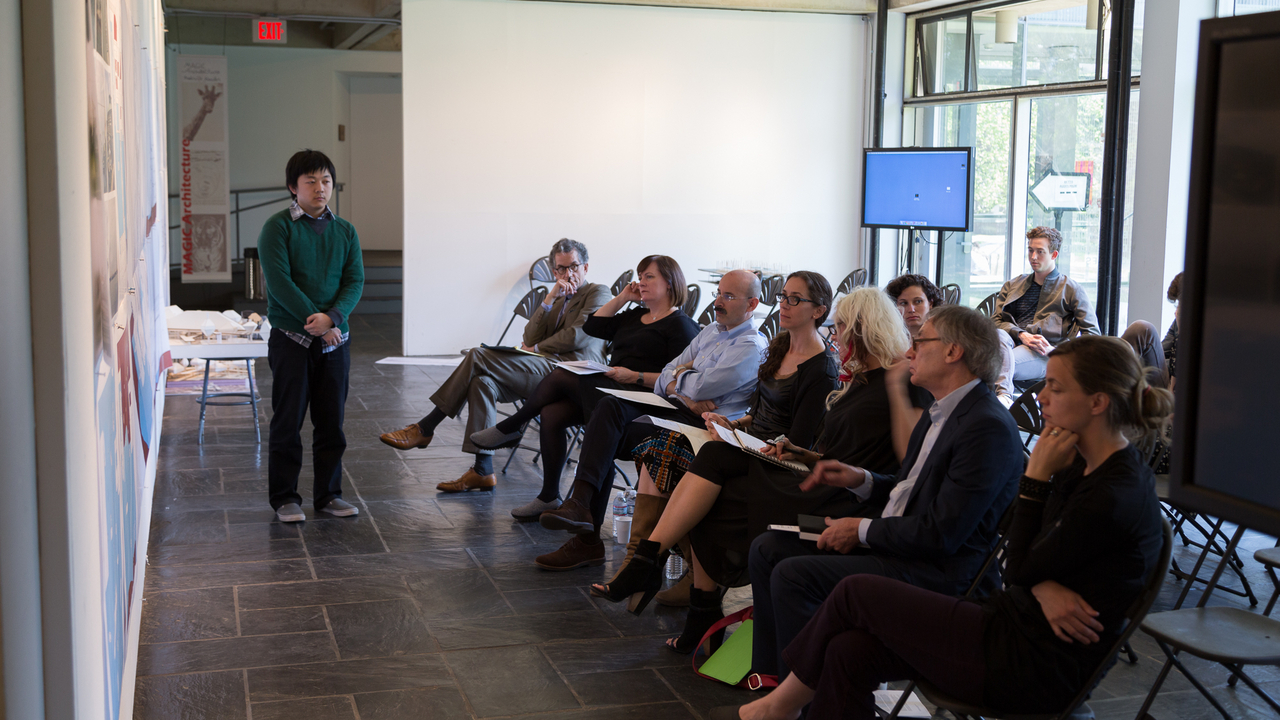 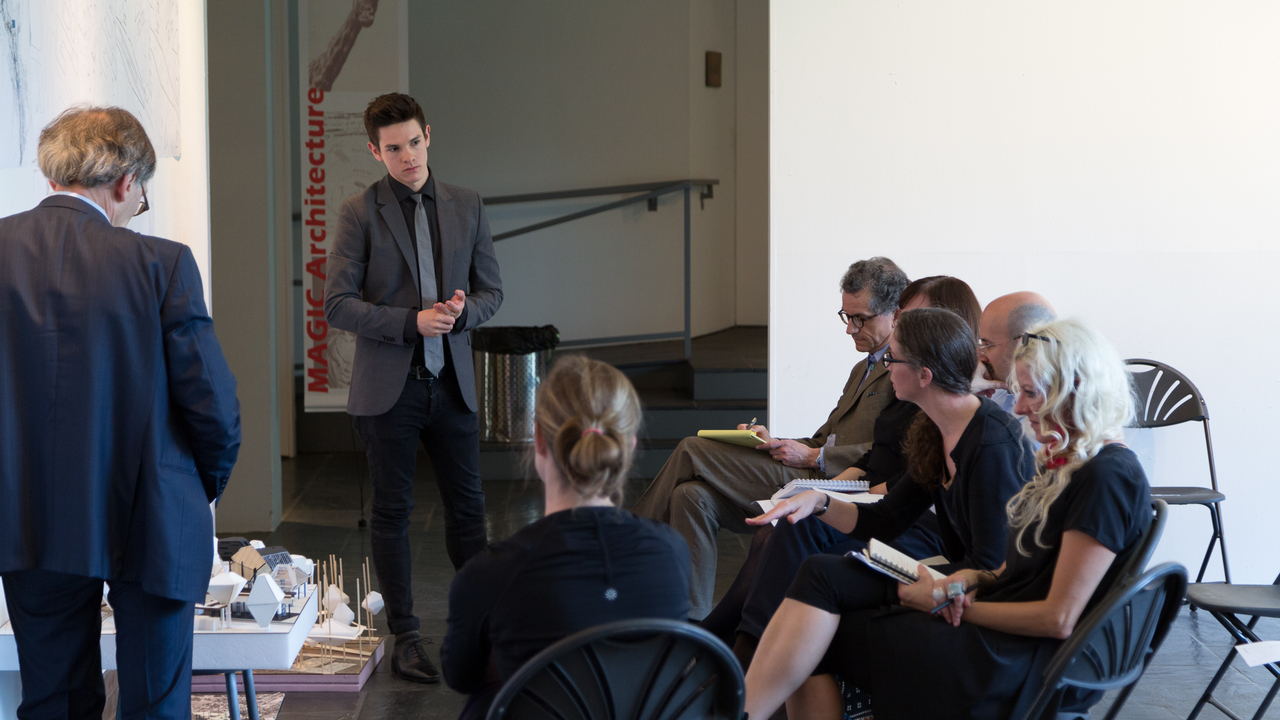 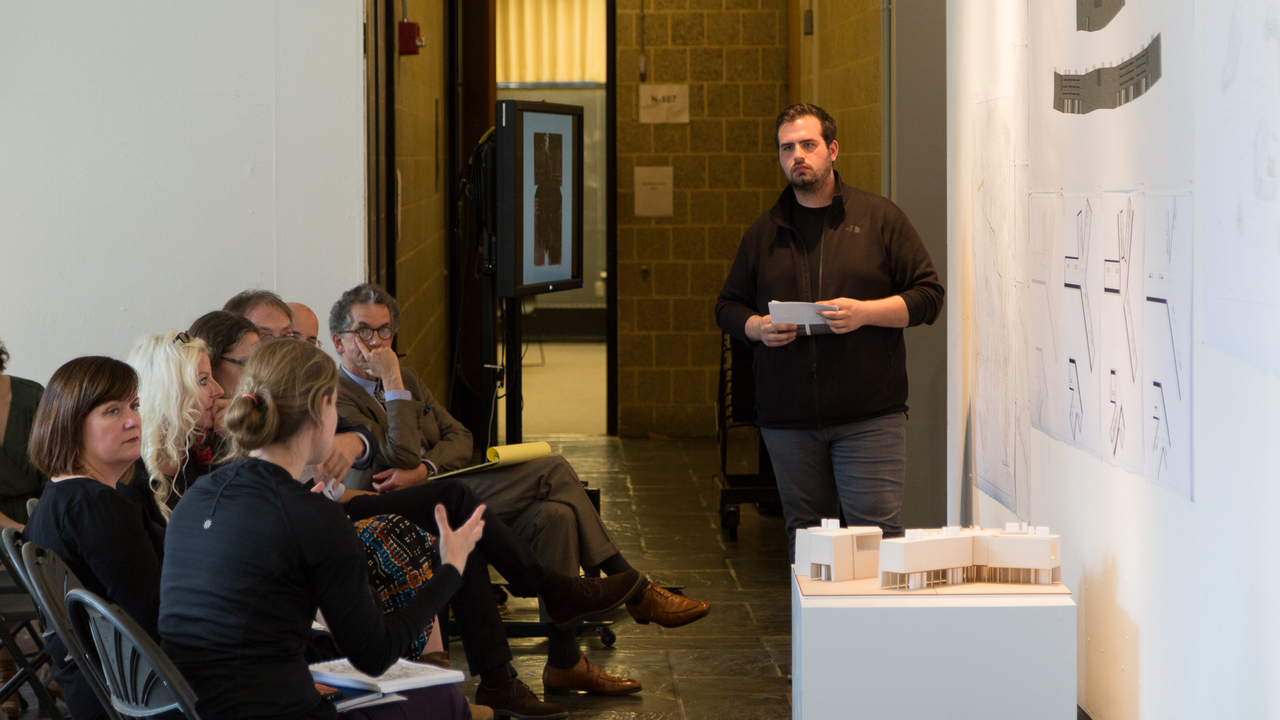 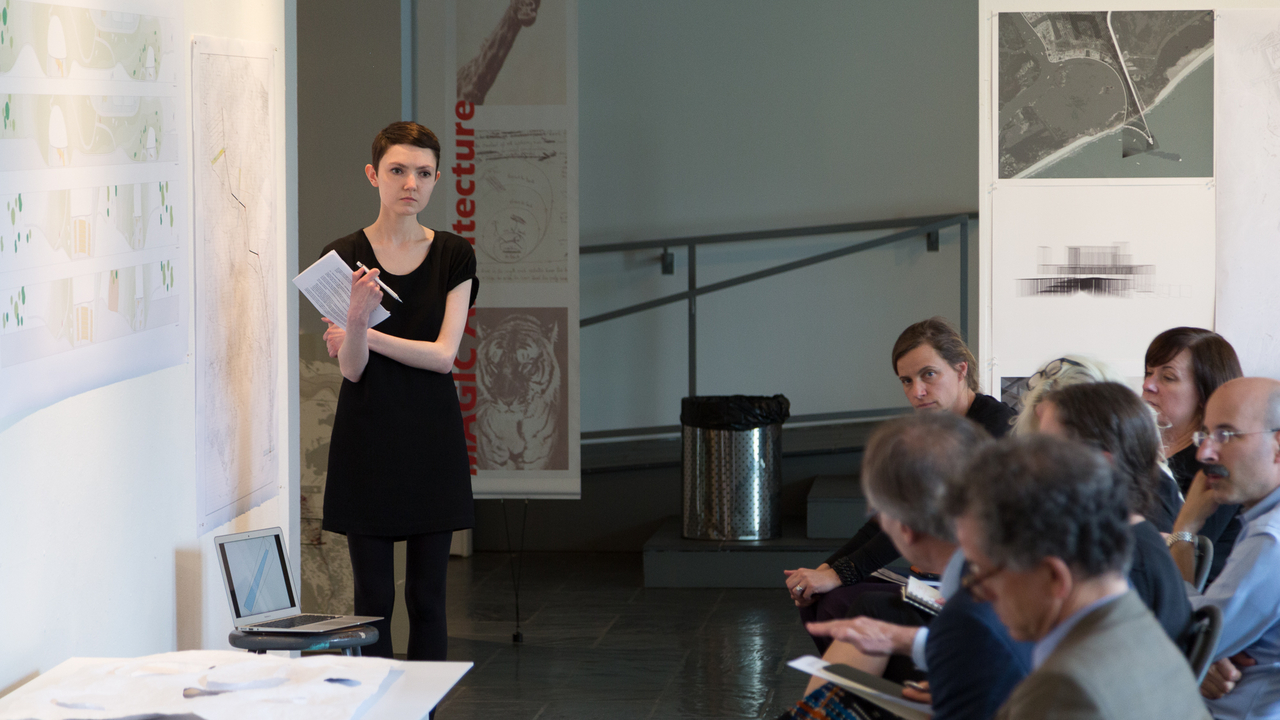 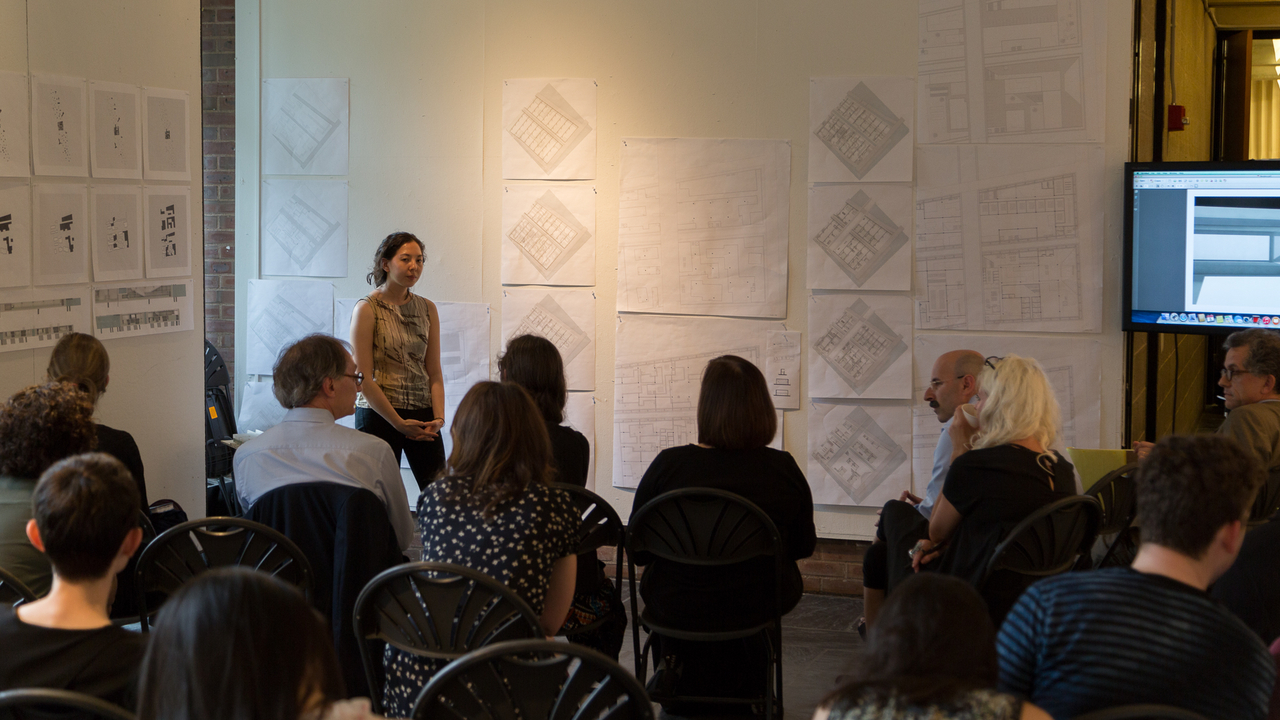 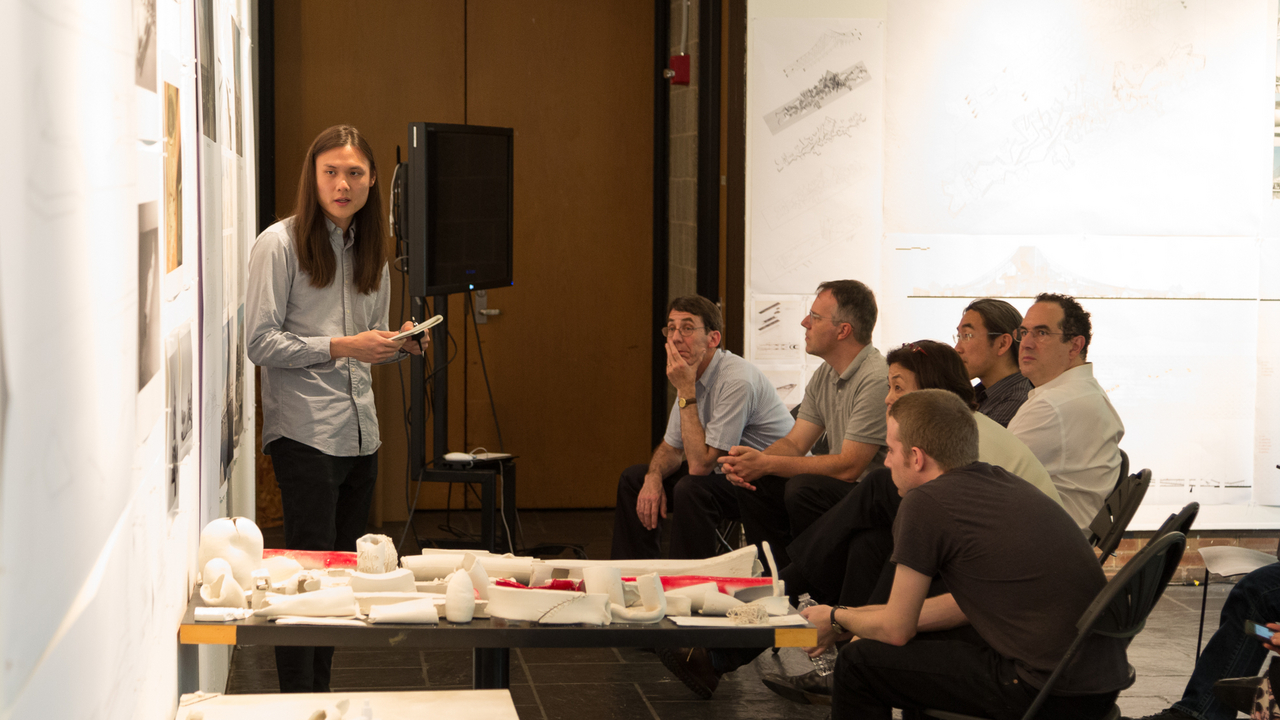 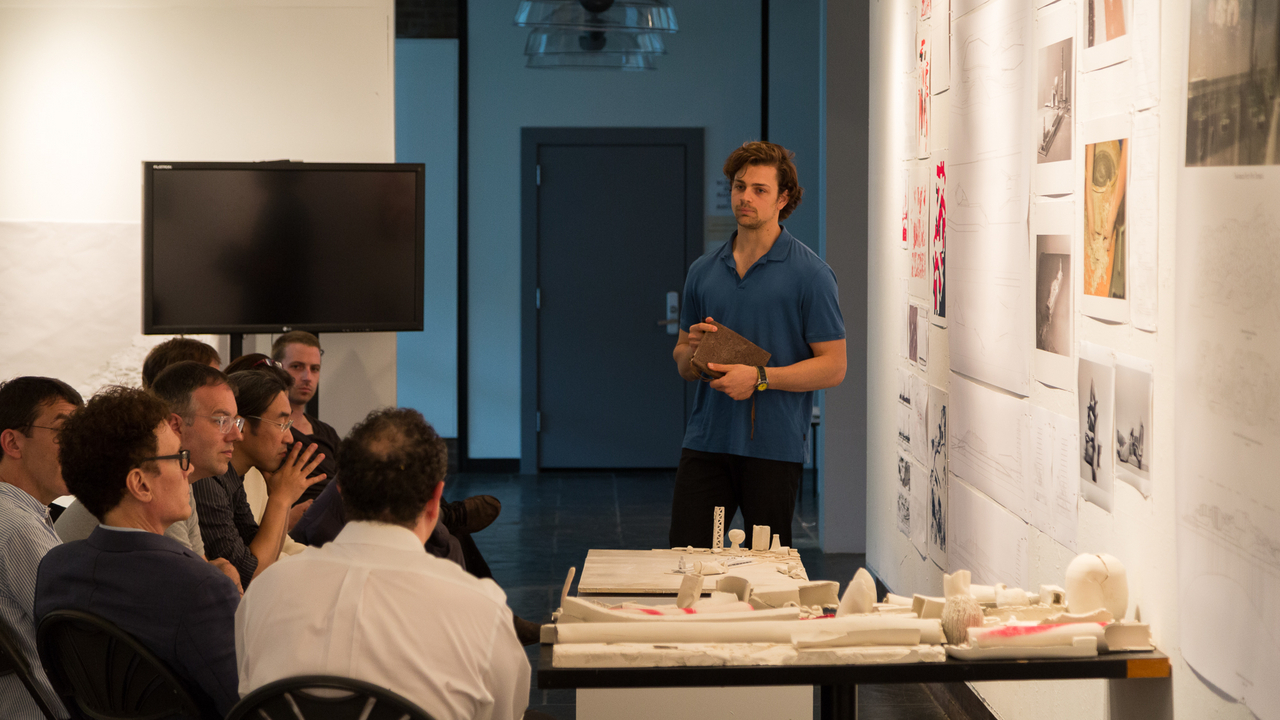 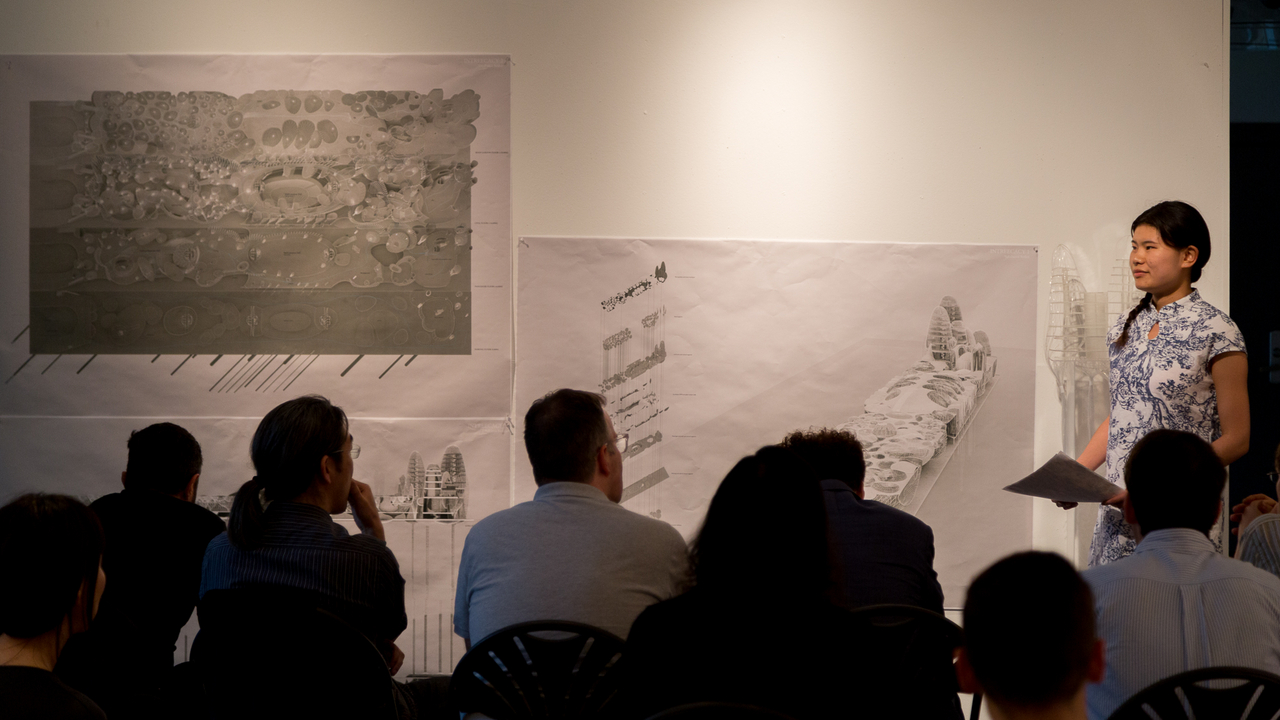 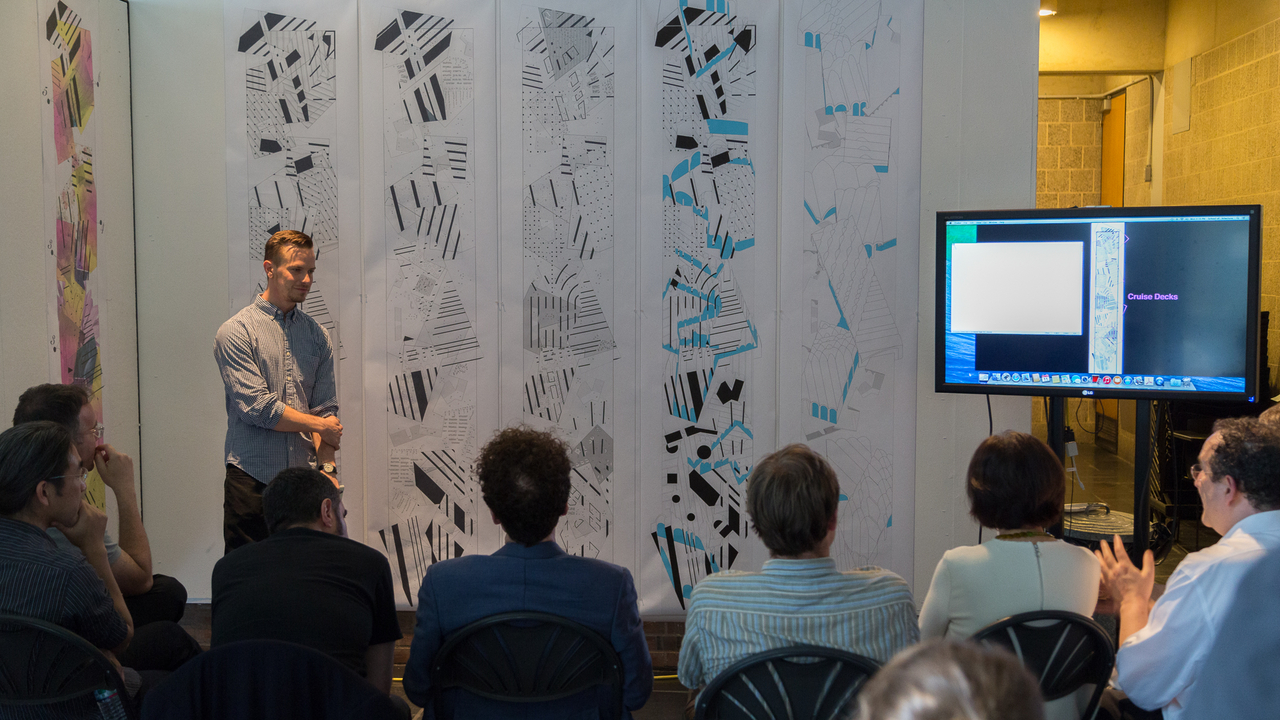 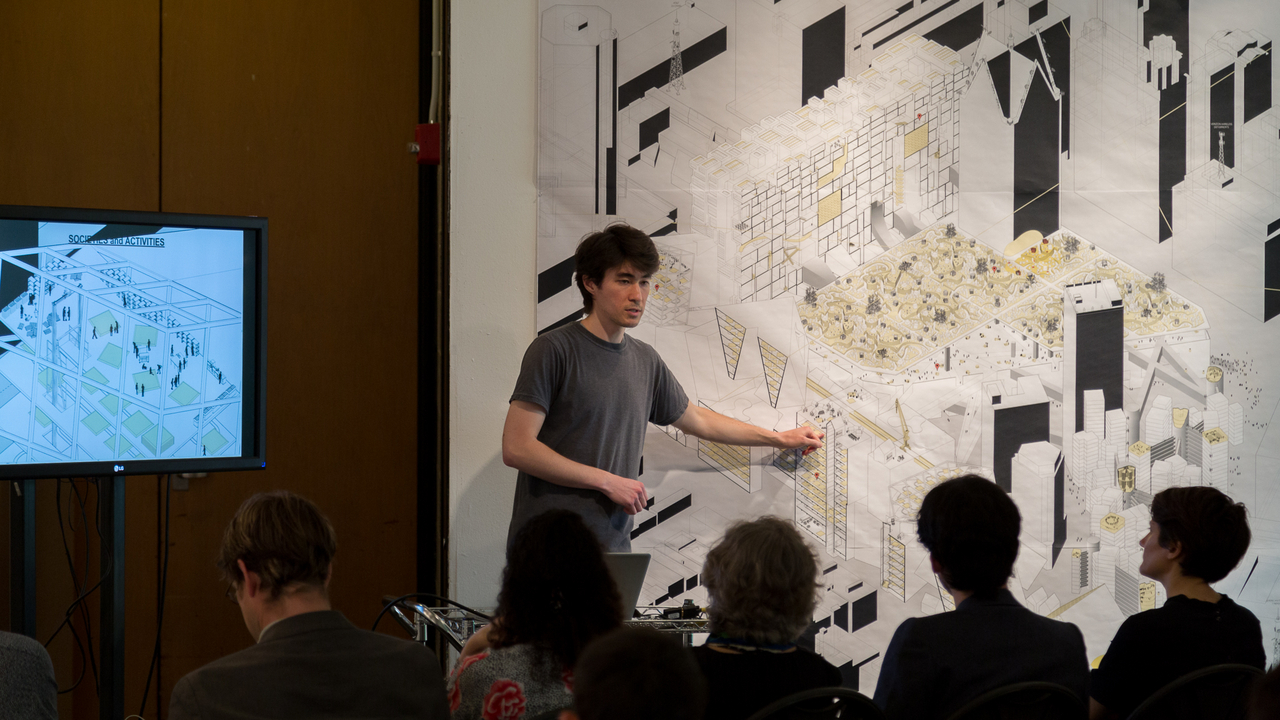 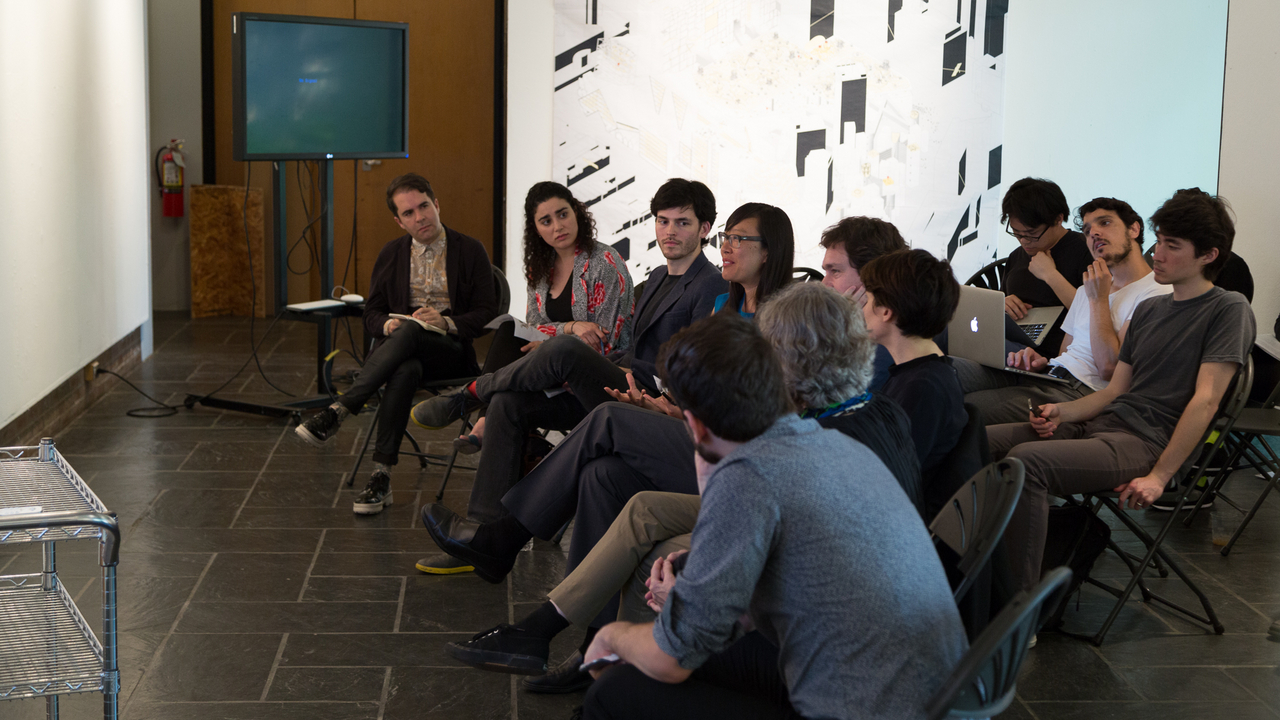 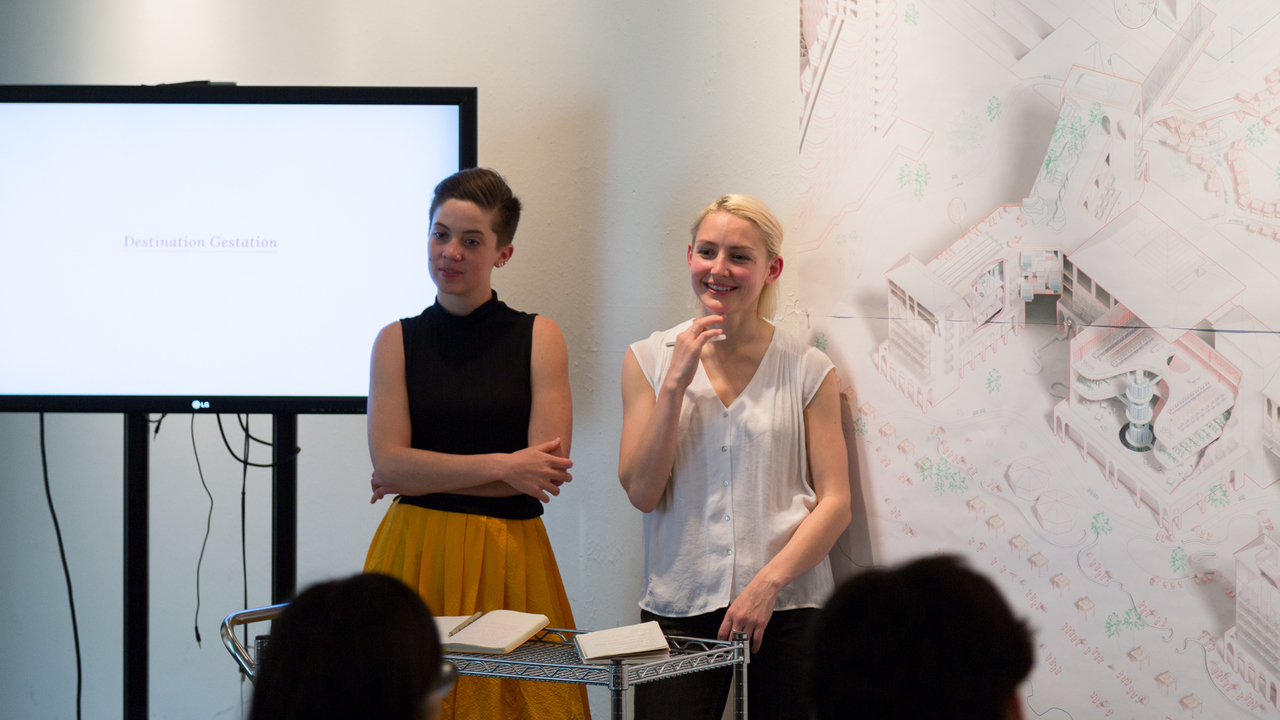 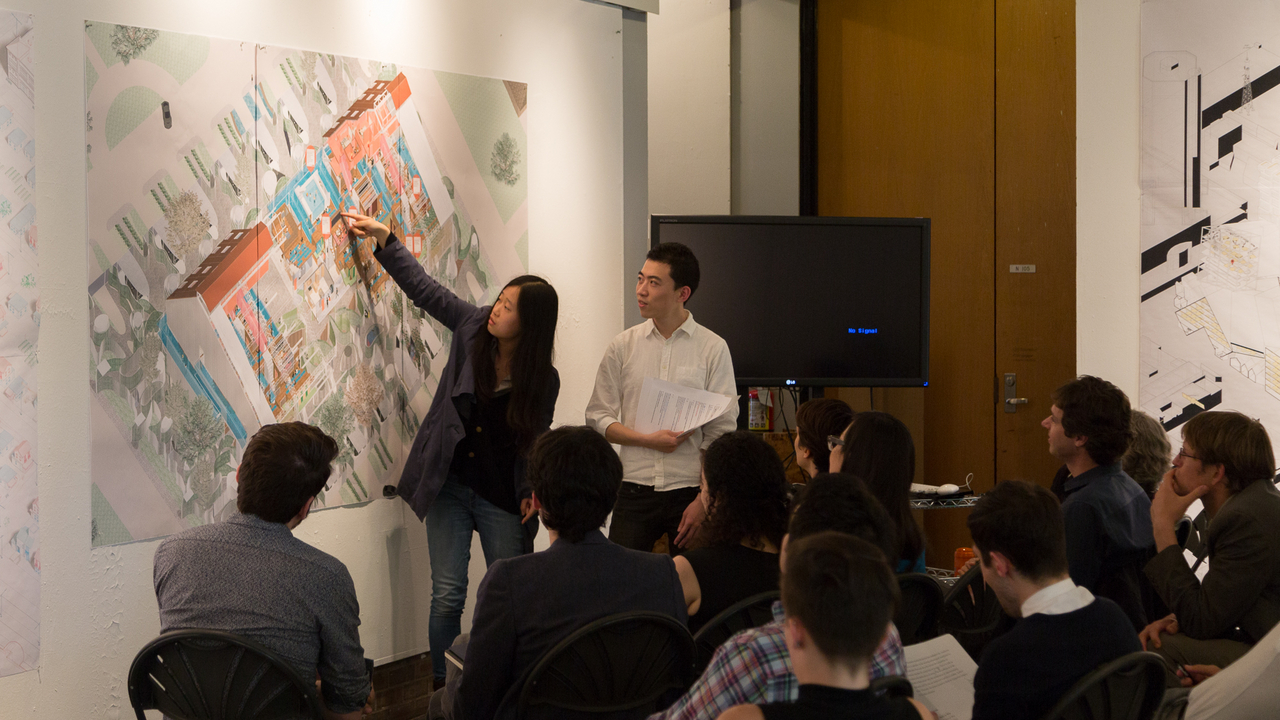 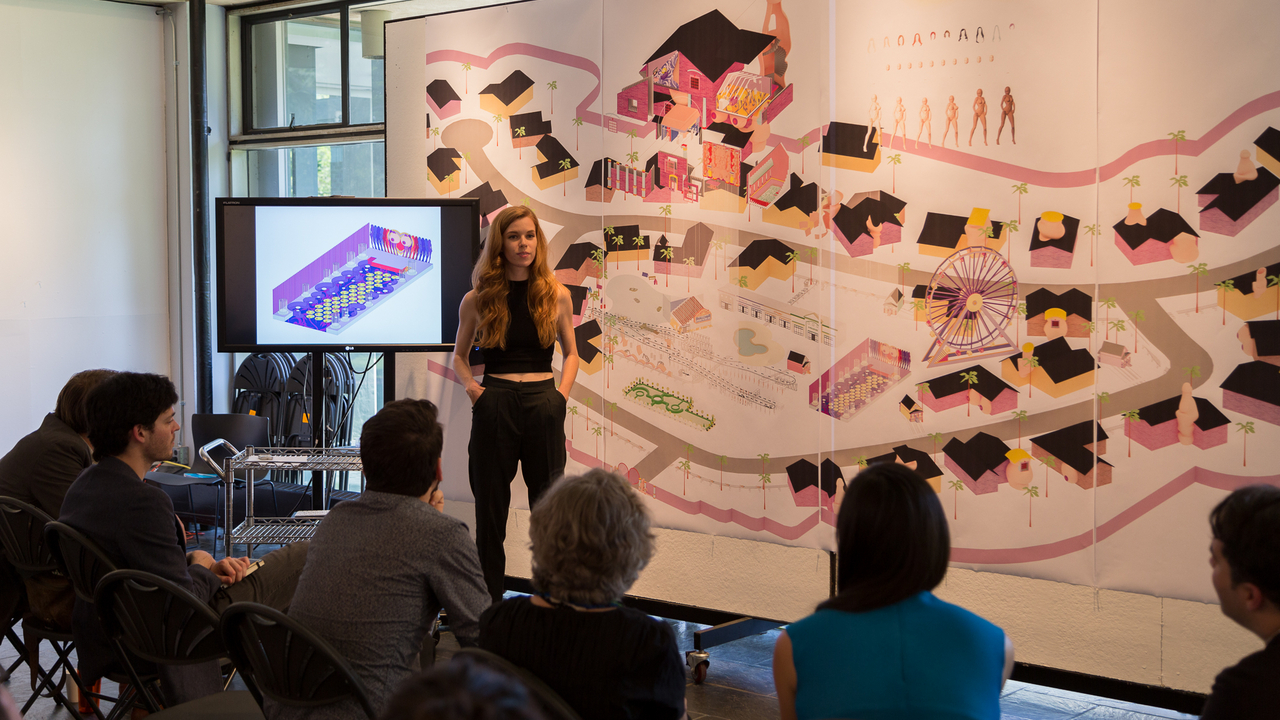 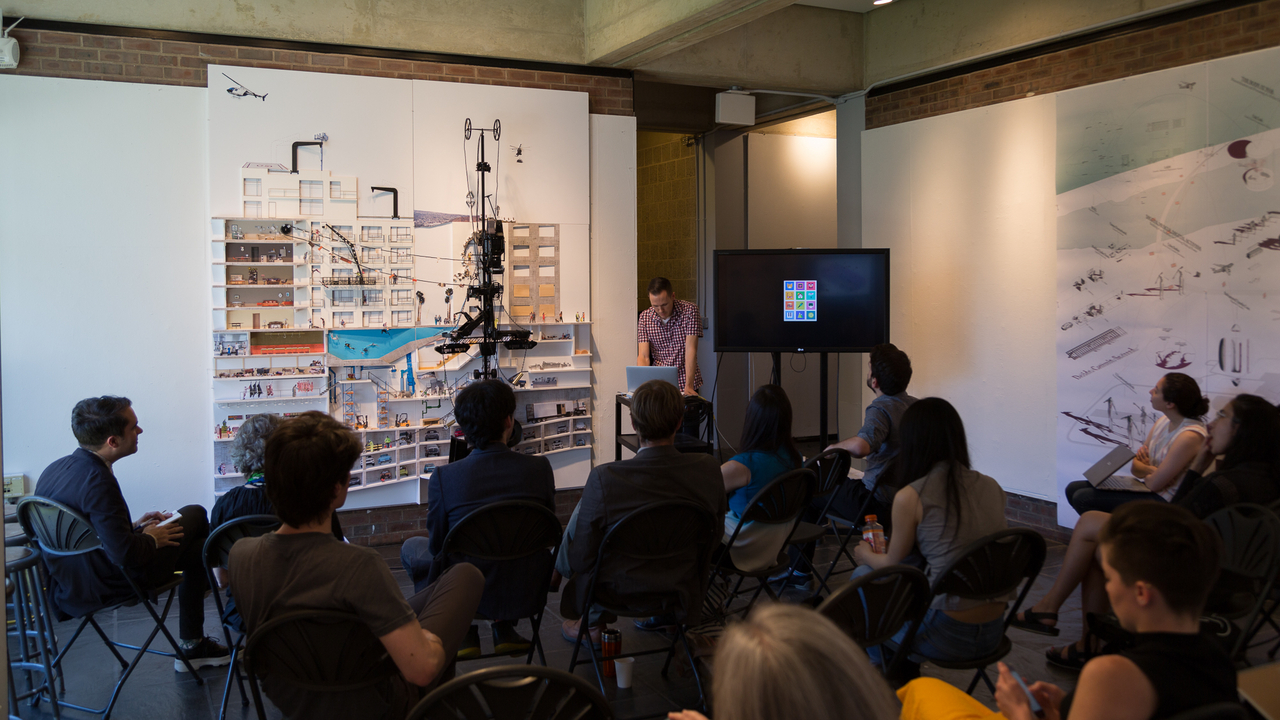 From May 4 through May 11, the Spring 2015 undergraduate and graduate Design Studios occupied the Architecture Building.

“The pavilion, most often associated with leisure space and liberated from the burdens of programmatic and regulatory restrictions, has yielded some of the most innovative and seminal works of modern architecture. These small-scale, lightweight, often mobile and temporary structures are fertile ground to explore a range of architectural agendas.  The studio will take on the pavilion as a vehicle for disciplinary experiments in structure, materials, program, time and movement as well as extra-disciplinary probes to find  architecture’s voice in the political, economic and environmental crises of our time.”

The Mississippi Delta has been losing land area at steady rate of at least 1,000 acres per year due to the lack of sediment deposition, the effects of salt water intrusion due to artificial canals, and to hurricanes, land subsidence and sea level rise. The total land area of the Delta is about 100,000 acres of which 60% are coastal marshes so the rate of land loss is significant - and it is likely to increase. The land loss affects the ecology of the Delta including the related fisheries, and threatens many communities including long established native ones. The loss of marshes also increases flood risks throughout the Delta and of course to the city of New Orleans.

To mitigate this a number of scientists and activists have proposed creating major new “diversions” that would redirect the flood waters of the Mississippi at the Old River Control Structure to feed five areas of the Delta: Wax Lake, Terrebonne, Bayou LaFourche, Davis Pond and Bayou LaLoutre. Of these Wax Lake is currently functioning. The diversion projects would entail major new infrastructure on a scale commensurate with the original Mississippi control structures of the 19th and mid 20th  centuries. It would also disrupt and alter many existing communities and landscapes.

This studio will develop portions of the infrastructure, landscape and (sub)urban designs for the proposed diversions along the Bayou Lafourche by first imagining an overall strategy of flows both down and up stream and then introducing fragments of the infrastructure to come. This infrastructure will relate both to the water, sediment, transportation and energy flows as well as community needs both ongoing and in the event of natural disaster emergencies.

We will study precedents for this scale of infrastructure and territorial planning in the works of the native mound builders, Kenzo Tange and the Japanese Metabolists, and Dutch architects and theorists Herman Hertzberger and Nicholas Habraken.

The occasion of the Yokohama Port Terminal competition in 1995 was a watershed for the discipline in many respects. A new generation of architects and theorists across the globe seized it as a platform to explore emerging modalities in design, design technology, and delivery which would in the ensuing decades become the medium through which and against which much of contemporary practice plays out. To understand this shift is to recognize that Yokohama elicited changes not simply in one architectural register but across almost all of the disciplinary and sub-disciplinary categories that involve the conception and practice of design.

This studio will undertake the Yokohama Port Terminal competition twenty years out based upon the accumulated knowledge gleaned from the salient speculative projects to emerge out of the competition and the subsequent trajectory of those ideas in the field. The work will proceed in three phases. First all students will undertake a formal analysis of a significant entry in the competition. This will involve not only analysis of the project itself but immediate antecedents to the project as well. The second phase involves taking the design principles derived from the analysis and creating a design model that will become the basis for your proposal. This involves a shift from the analytical mode to the projective mode. This model will factor in subsequent developments related to that model over time as shown in projects and design research that followed. The third phase will be the deliberate introduction, at three distinct scales and using three different systems, of discrete programmatic elements into the continuous models analyzed in the previous phases. This final phase brings us to projects and problems that are actively being worked through today. As such they are open ended. Assuming you take this material as seriously as your professional colleagues your successes and failures, will be vital contributions to the field.

Selected material from the studio will be presented next year in symposia at Tokyo University and Princeton University, celebrating the 20th anniversary of the Yokohama Port Terminal Competition and in a planned publication.

Suburbia and countryside are no longer experienced in opposition to cities.  A number of transformations have fueled this change: the growth of mobile broadband access, online interaction, air passenger traffic (accompanied by a significant drop in airline fares), daily commuting and commercial freight; the empowerment and increasing influence of independent town-oriented sensitivities (from farm-to-table to the Americana music scene); and the growing intensity of media attention and political discussion on environmental concerns, by which suburbia and countryside locations have gained visibility and imbrications within cities’ unfolding.  As a parallel process, freeways, franchises, green areas, condos, and concerns on the quality of air and “healthy urban experience” have made their way into cities.

City, suburbia and countryside, as special categories, are no longer able to explain or project the demarcation of daily life.  Having breakfast, engaging politically or developing relationships are all processes happening in a different spatial mode, namely the transience between constellations of heterogeneous entities distributed around the world, occupying simultaneously urban and non urban space.  The studio proposes to explore what happens to architectural design when facing this spatial mode, that we will call TRANSURBIA.  To explore its architectural specificity and ways for architectural practices to become relevant in its design are the goals of the TRANSURBAN STATES OF AMERICA studio.

The aim of this research is to produce a comprehensive proposition for the contemporary city: a speculative update of the Athens Charter. We will use Seoul as a paradigmatic case of the contemporary city to test different proposals in a specific urban environment. The studio will operate as a research group where every member will undertake a particular experiment that will become part of a collective proposal, possibly to be exhibited in a pilot edition of the forthcoming Seoul Architecture Biennale, in October 2015.

Although the course will be structured as a research and prototyping studio, it will require producing designs that address the present and immediate future of these Seoul urban infrastructures. The challenge is to recycle urban infrastructures while innovating and envisioning new possibilities and functions according to the emerging urban protocols. The collection of all studio projects will constitute a comprehensive document to be published and exhibited in the first Seoul Architecture Biennale.

The object of this research is to manifest the physical and spatial implications of technology on social organizations, urban events, or institutional and economic formations, once applied to an existing physical infrastructure. Members of this research will collaborate with authorities in Seoul Metropolitan Government and other institutions. Students will develop an innovative network of recycled spaces for Seoul through architectural means. The physical precedent of these existing infrastructures will help to focus spatially and materially the questions of our research: the final proposals will have to be necessarily mediated through these pre-existing physical entities. The studio strategy will be not so much to translate the digital into the physical but rather to mediate digital technologies through a pre-existing urban infrastructure, and to engage in the processes of urban recycling, which we believe will become increasingly crucial for urban planning. How can architects play a role in encouraging a community of innovation for Seoul rather than another wave of gentrification?

The work will be aimed at envisioning viable reuse of these infrastructures for programs which are created by and for new urban technologies.  We will assign different projects of urban recycling to the different functions of the Athens Charter, in order to test them on a condition of re-use rather than of tabula rasa.