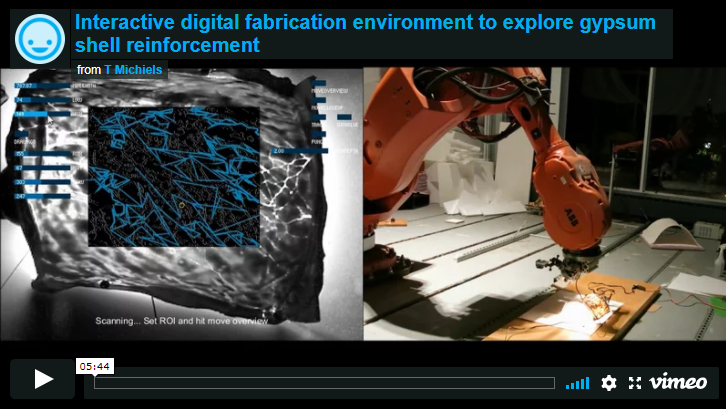 In the context of the course ARC 596 “Embodied Computation”, a project is developed to explore novel forms for gypsum shell by repeatedly breaking and repairing these types of shells using digitally controlled tools.

The School of Architecture’s ABB 7600 robot is used to repetitively break, scan and repair gypsum shells. The broken shells are repaired by selectively gluing weak areas in order to create a bond that is stronger than the initial unreinforced gypsum. The investigated hypothesis is that after every iteration the newly repaired shell has the potential of a greater load bearing capacity than its predecessor. The reinforcement pattern is directly determined by the shell’s crack pattern and does not arise from an analytical approach typical to common reinforcement strategies. Indeed, the process is not dependent on a preconceived design, but much rather evolves from the intrinsic material properties and the initial form and imperfections of the shell. The process can still be steered by the designer in real-time through a set of interactive overlays in a custom control software.

The implementation of the project required the setup of a digitally controlled fabrication environment in which three tools were mounted onto the arm of the robot. A Kinect-style RBG-D camera (Asus Xtion Pro) was used to scan the surface for cracks. This low-cost device is able to obtain a depth map and RGB image of the shell and, as it is mounted to the robot, its location is controlled at all times. By setting up a communication protocol between the robot and the image processing software (written in Processing, a programming environment), it is possible to correlate the depth map and image sent by the 3D scanner with its exact location and orientation in the coordinate system of the shell, and thus, one can accurately determine the location of the cracks in the object through a series of geometrical transformations. Once the cracks have been located, the software sends movement instructions to the robot so that it can trace the found cracks using a second tool that pours glue. Finally, the user interface allows the designer to instruct the robot to break the repaired surface in a given position using a hammering tool. The cycle of breaking, scanning and tracing can then be repeated and guided in real-time by the designer through an interactive interface.

The interactive robotic fabrication environment was setup as demonstrated in the accompanying video. Due to minor issues with the glue’s rheology, only a limited set of experiments have been performed thus far to test the feasibility of this methodology. It is clear, however, that the developed fabrication technique shows promise to come up with new strengthening patterns. The method could be extended to large scale buildings, for example by using drones or lightweight robots to fly or drive over roof shells to perform maintenance or seismic retrofitting. 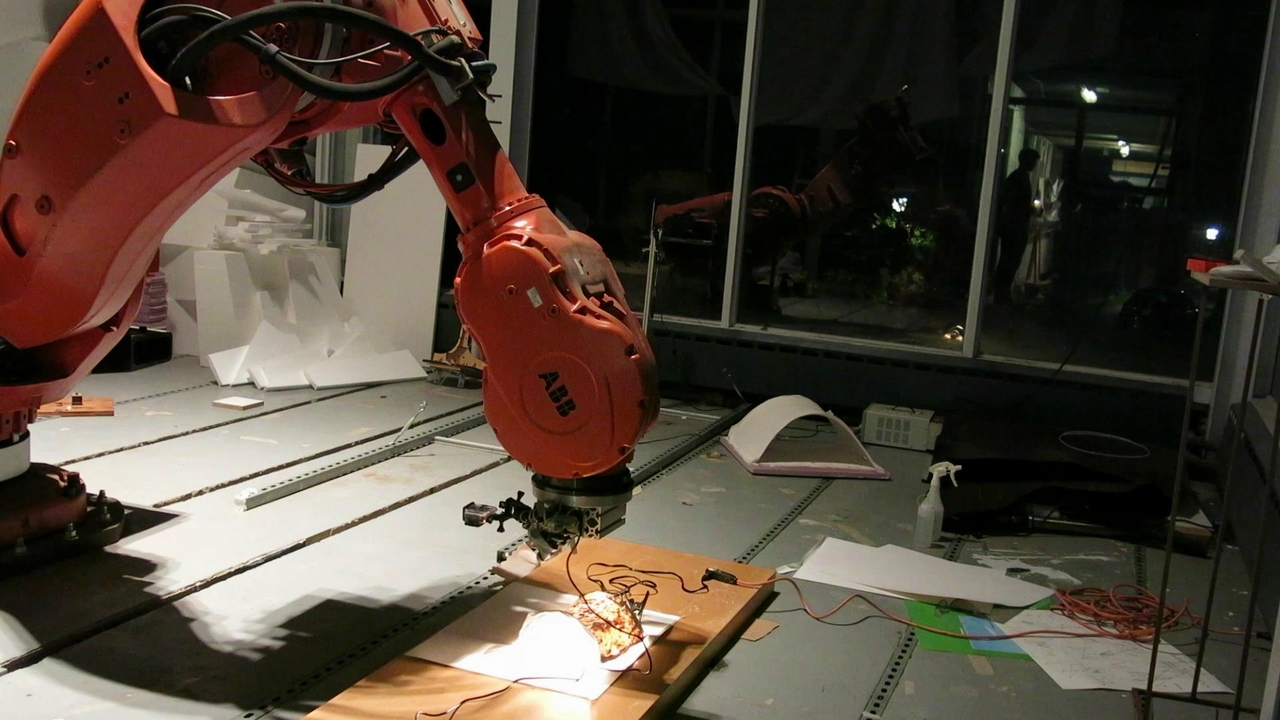