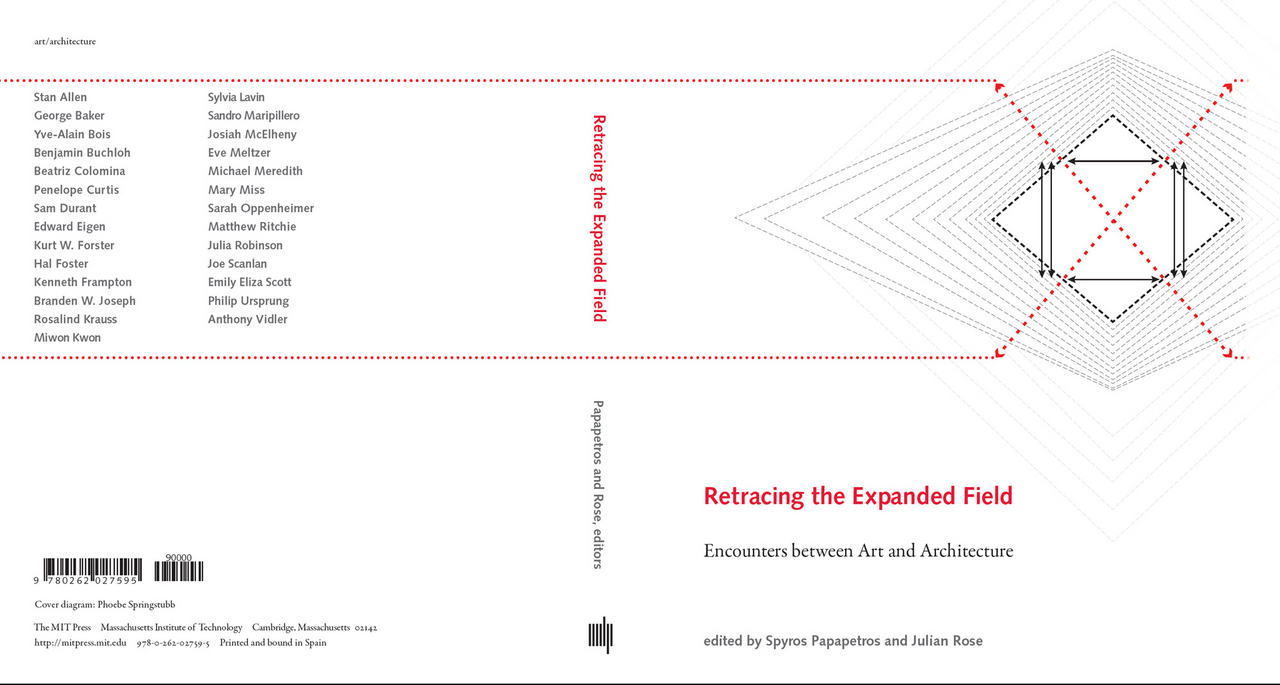 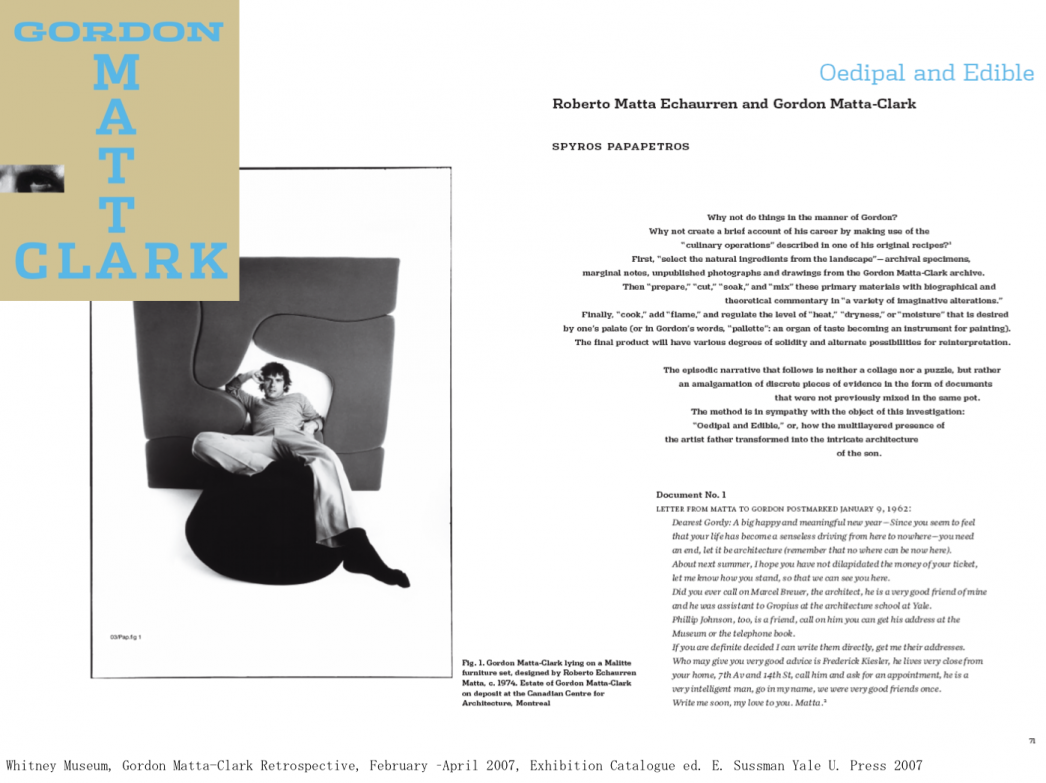 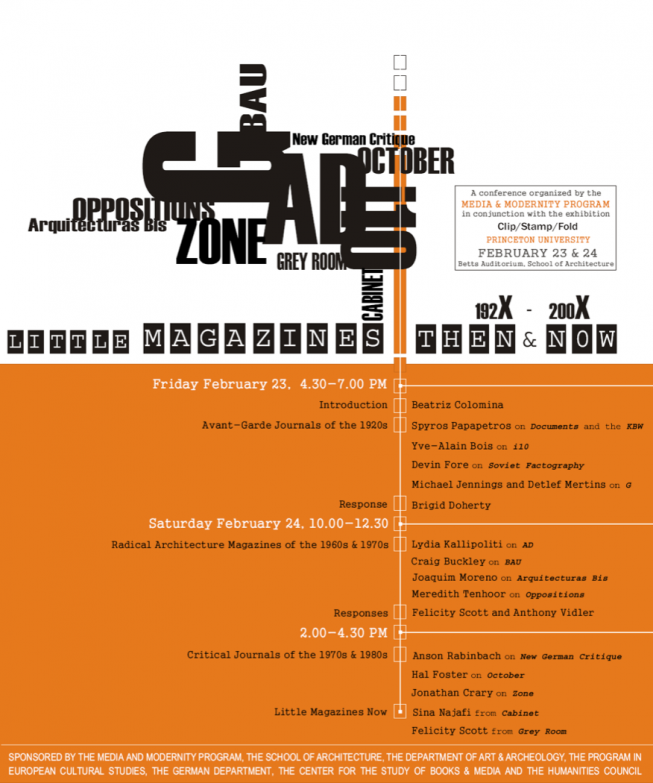 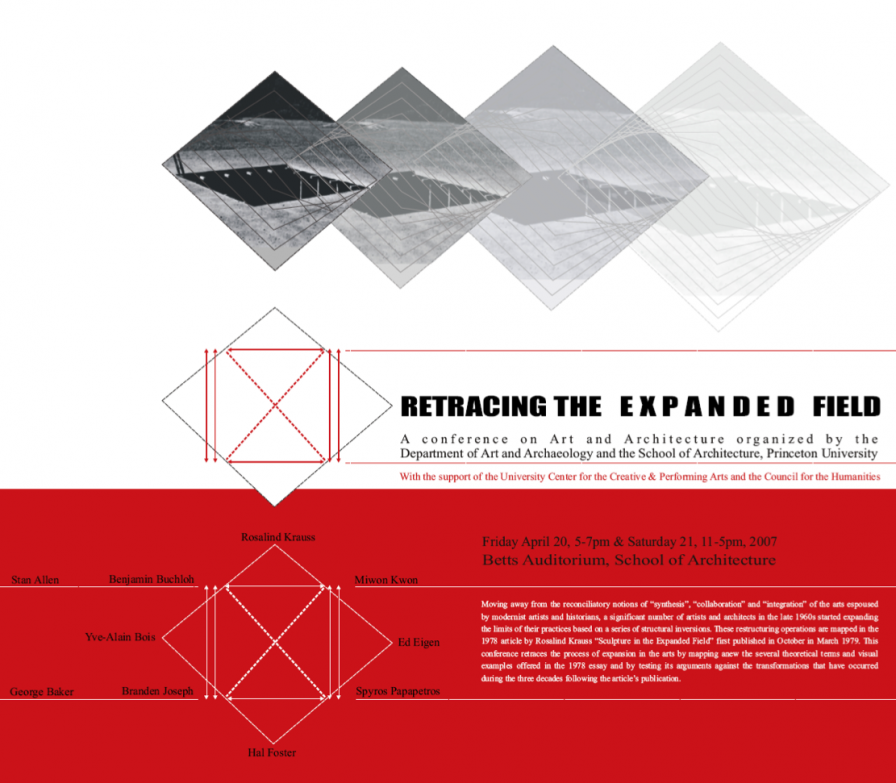 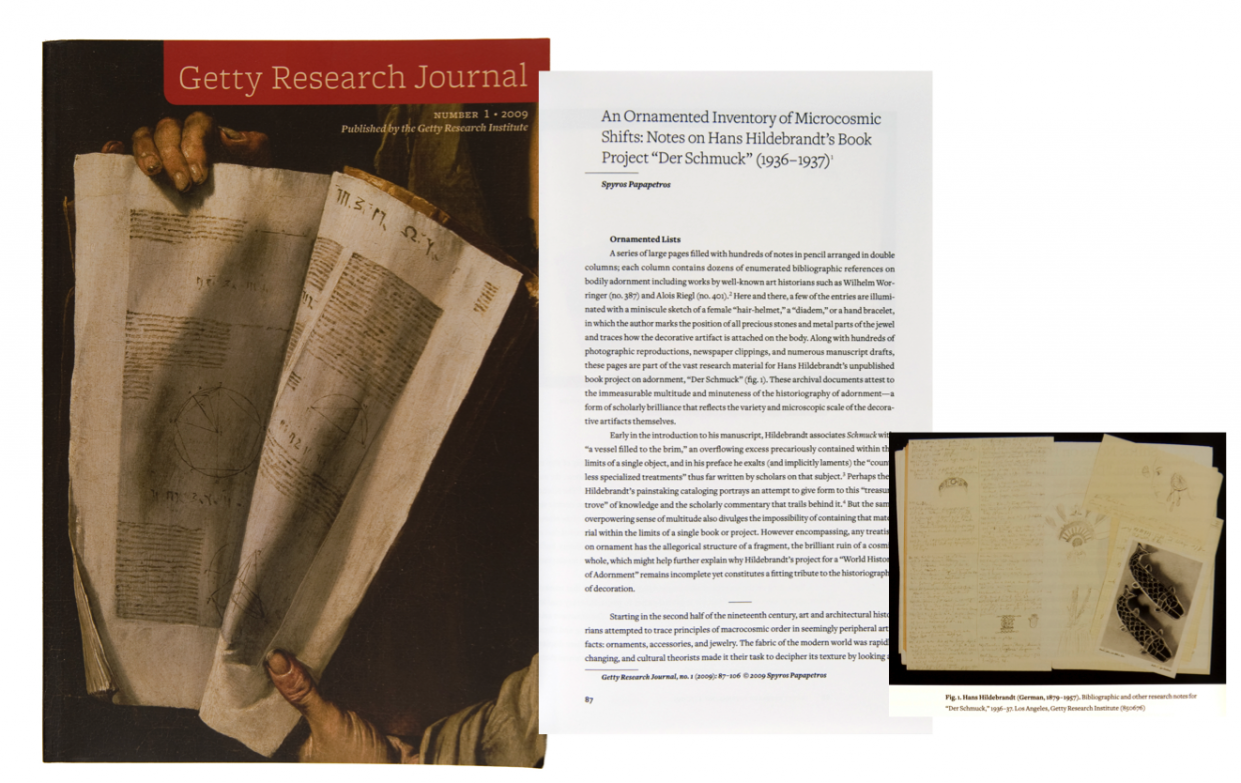 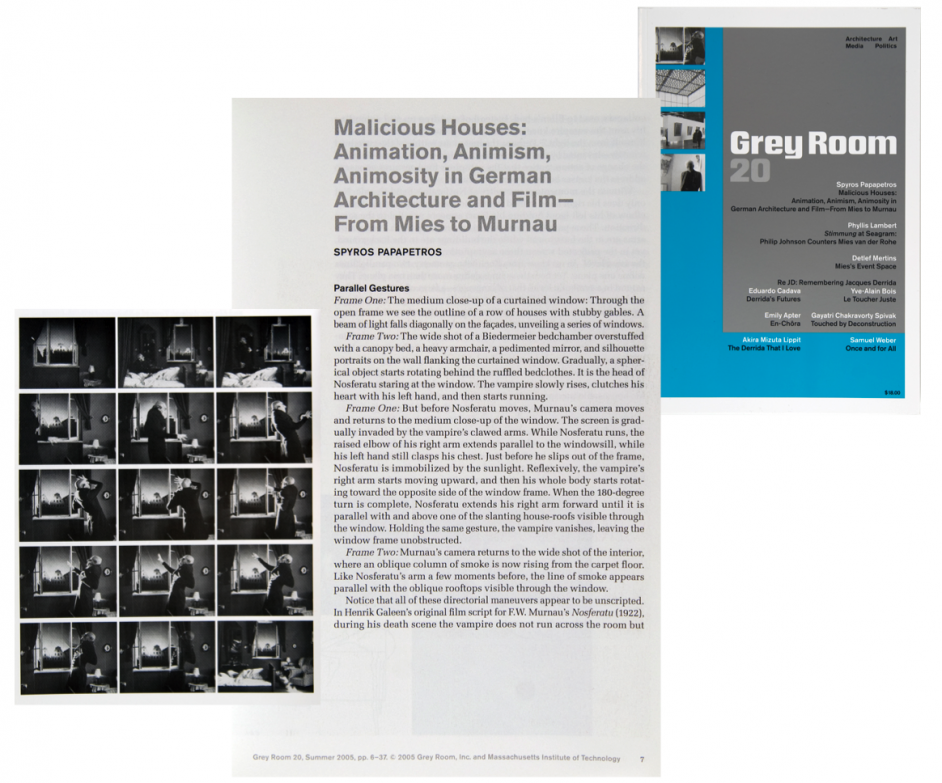 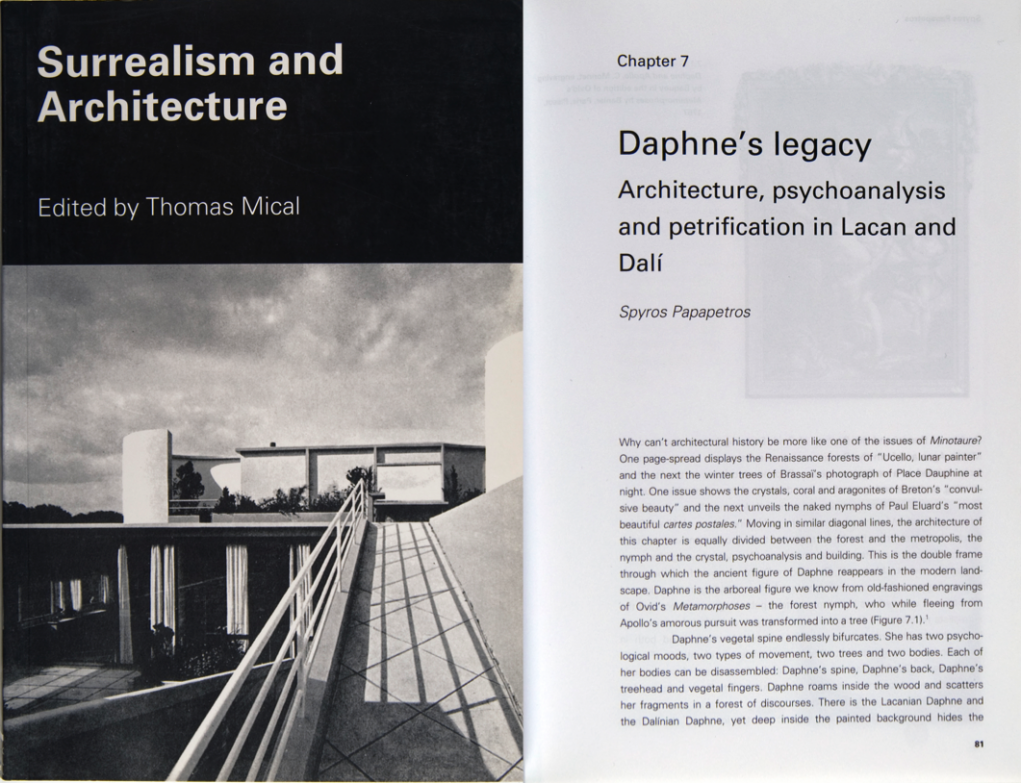 Spyros Papapetros, who joined the faculty in 2003, is an art and architectural historian and theorist whose work focuses on the historiography of art and architecture, the intersections between architecture and the visual arts, as well as, the relationship between architecture, psychoanalysis and the history of psychological aesthetics. He is a member of the steering committee for the Program in Media and Modernity since 2006 and the 2012-2014 Behrman Faculty Fellow in the Humanities at Princeton University. A former Fulbright scholar, Papapetros is also the recipient of a scholarship from the Townsend Center for the Humanities at Berkeley and two postdoctoral Research Fellowships from the Getty Research Institute in Los Angeles and the Canadian Centre for Architecture in Montreal. During 2002-2003, he was an associate fellow at the Warburg Institute in London where he researched the unpublished manuscripts of Aby Warburg. In the spring of 2006 he was a visiting Scholar at the Getty Research Institute in Los Angeles contributing to the theme of “The Persistence of Antiquity.” In 2007-2008, he returned to the Getty Research Institute as a Getty Scholar contributing to the yearly theme “Change.” He is the author of On the Animation of the Inorganic: Art, Architecture, and the Extension of Life (The University of Chicago Press, 2012) and the editor of Space as Membrane by Siegfried Ebeling (London: AA Publications, 2010). Recent published articles include “Beginnings or Origins—Beginnings and Endings: Sigfried Giedion’s (Pre)Historiography” in Journal or Architectural Education65:2 (Spring 2012), “ Between the Academy and the Avant Garde: Carl Einstein and Fritz Saxl” inOctober 139 (Winter 2012), “Microcosme et Macrocosme” in Gradhiva 14 (November 2011), “Le Corbusier and Freud on the Acropolis: Notes on a Parallel Journey” in Architects’ Journeys: Building, Traveling, Thinking edited by Craig Buckley and Polyanna Rhee (GSAPP Books/T6 Ediciones, 2011),“World Ornament: The Legacy of Gottfried Semper’s Essay on Adornment” in RES: Anthropology and Aesthetics 57/58 (January 2011), “On the Biology of the Inorganic: Crystallography and discourses of latent life in the art and architectural historiography of the early twentieth century” in Biocentrism and Modernism edited by Oliver Botar and I. Wünsche (Surrey: Ashgate, 2011), “Architecture and Regression: On the Pre/post/erous Histories of the Modern Movement” The Cornell Journal of Architecture, Volume 8, (January 2011), “The Directionality of Hair” in Cabinet, 40 (December 2010), “Building from Behind: Architecture and the Aesthetics of Dorsality” in AREA: Rivista di Architettura, 112 (September/October 2010),  “MICRO/MACRO: Architecture, Cosmology, and the Real World” in Perspecta Vol. 42, The Real (MIT Press, April 2010), “Space, Time, and Monstrosity—A (Retrospective) User’s Guide” in Monsterpieces of 2000 (New York: Oro Editions, 2010), “The Sculptor as Historian” in Josiah McElheny (New York: Skira/Rizzoli, 2010),“An Ornamented Inventory of Microcosmic Shifts: Notes on Hans Hildebrandt’s book project Der Schmuck, 1936-37” in The Getty Research Journal (March 2009), and “Aby Warburg as Reader of Gottfried Semper: Reflections on the Cosmic Character of Ornament” in Elective Affinities: Testing Word and Image Relationships  (Amsterdam: Rodopi, 2009). Forthcoming publications include articles in The Art Bulletin, AA Files, RES, and a number of edited anthologies. During 2011-2012 he participated in the research exhibition Animismus organized by Anselm Franke and which travelled from Vienna (Generali Foundation) to Berlin (Haus der Kulturen der Welt) and New York (E-Flux). Papapetros is also the co-editor of a forthcoming book based on the symposium Retracing the Expanded Field that took place in the Princeton School of Architecture in 2007 on the intersections between architecture and the visual arts during the last three decades. He is currently completing a second personal book project under the general title World Ornament on the historiography of architectural ornamentation and bodily adornment from the mid 19th to the mid 20th century.