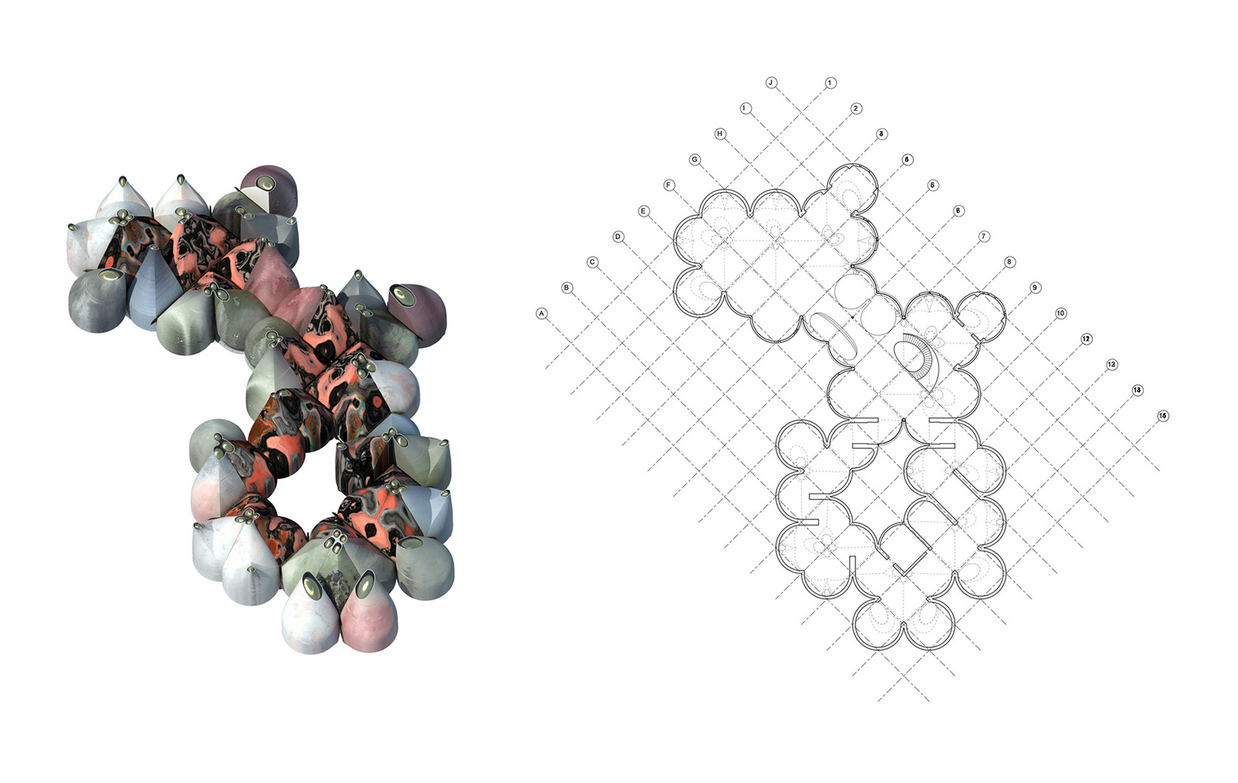 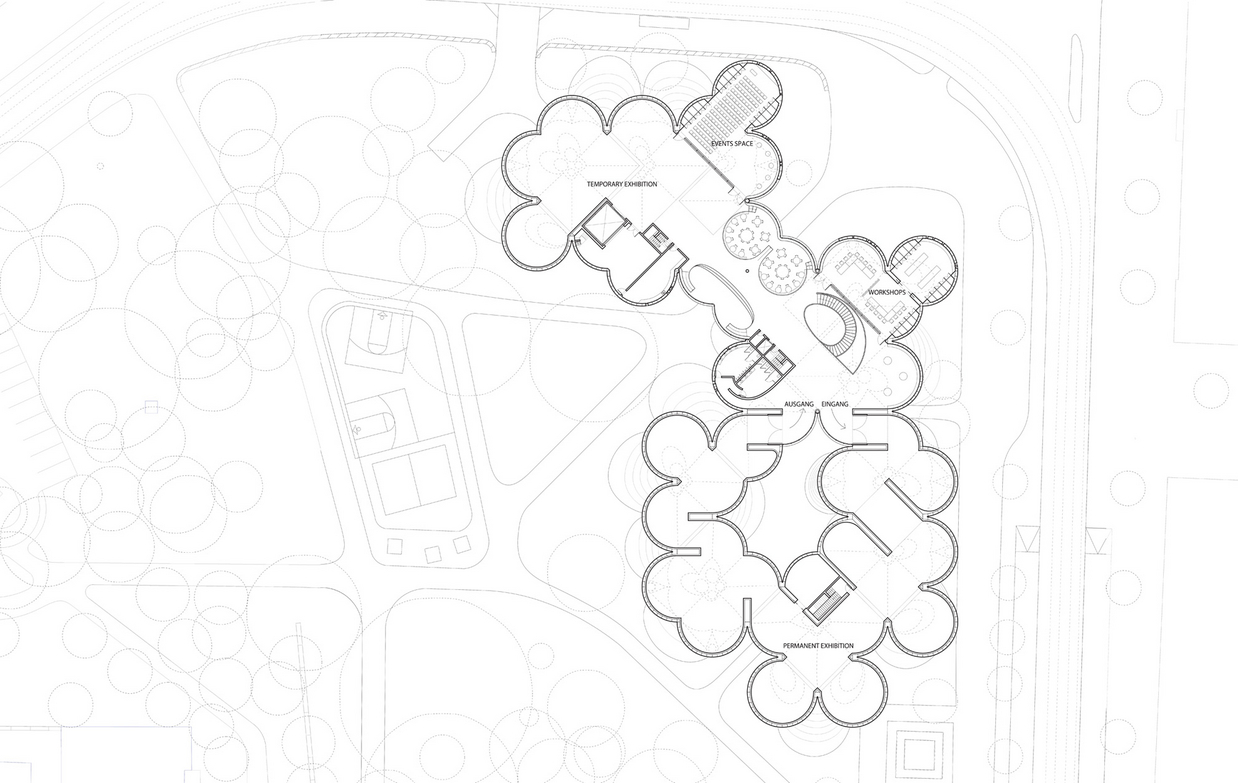 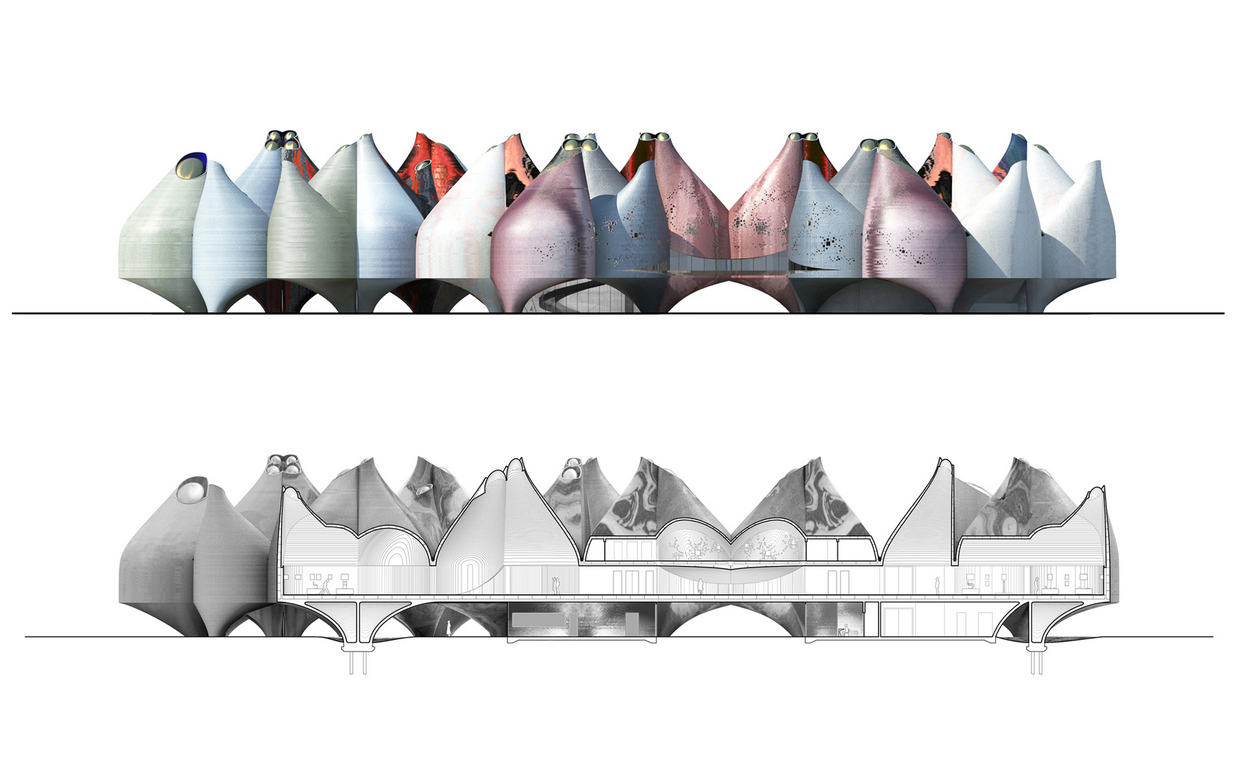 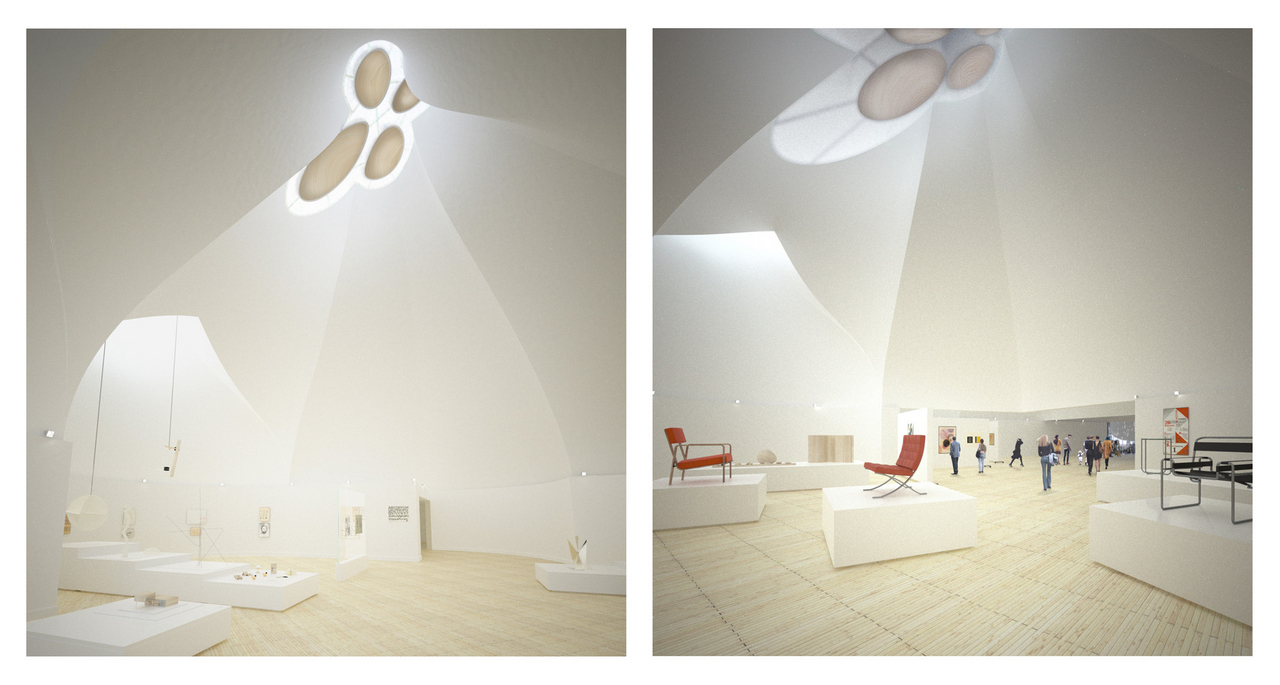 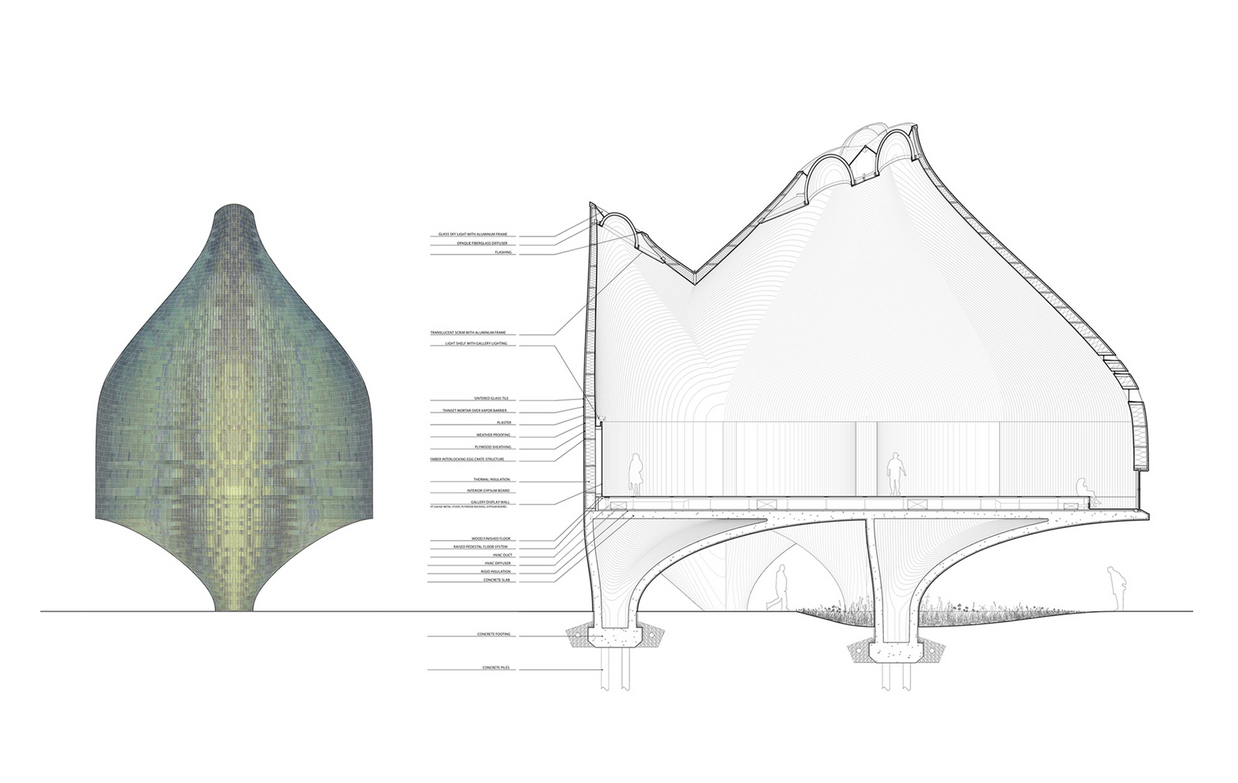 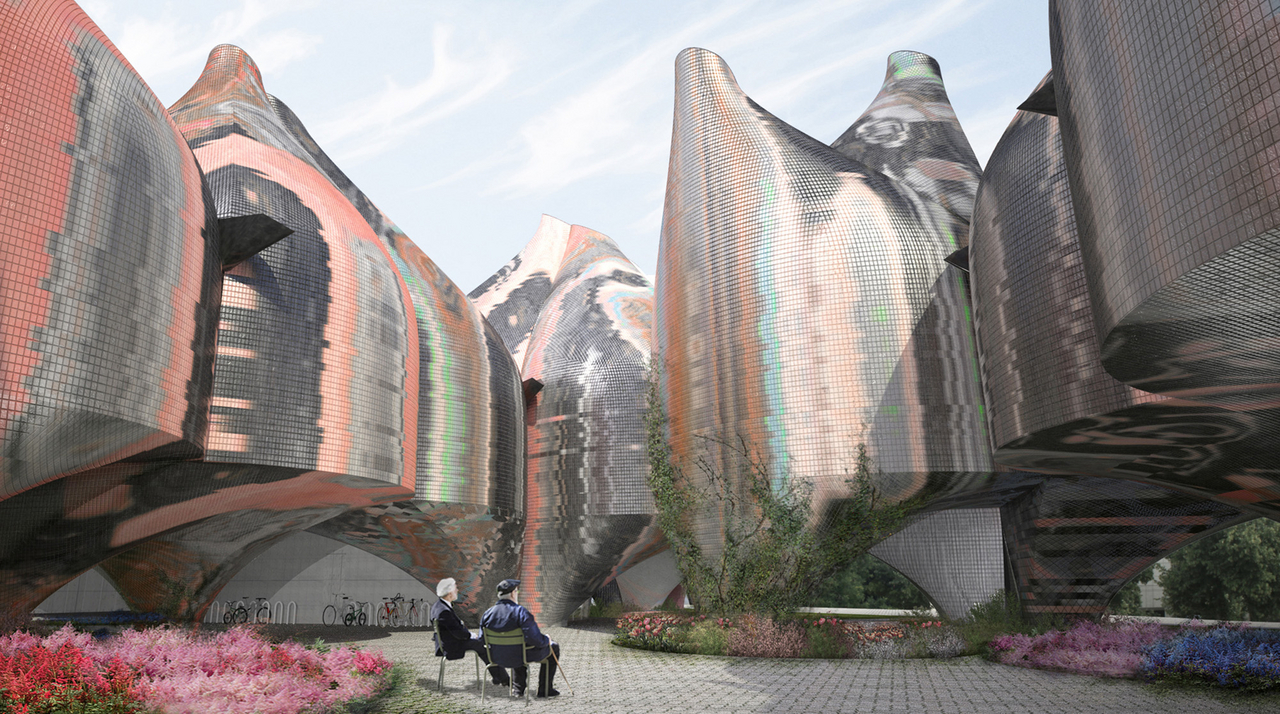 Last week, Young & Ayata, the architecture firm led by Princeton alumni Michael Young (MArch '05) and Kutan Ayata (MArch '04), tied for first place in the Bauhaus Museum Dessau design competition in Dessau-Roßlau, Germany, for a new museum scheduled to open for the 100th anniversary of Bauhaus in 2019.

The site is located in the City Park at the center of Dessau.  The museum website notes that the new building "will enable the Bauhaus Dessau Foundation, for the first time, to comprehensively present the treasures of its valuable Bauhaus collection – the second largest collection of its kind in the world with over 40,000 objects. The aim is to create a “Museum in Motion” with a dynamic exhibition concept covering a total exhibition area of 2,100 square metres."  Design requirements also included indoor and outdoor parking.

After "a long day of intense discussion," the international jury elected to award first place to two outstanding designs. The proposal by Young & Ayata, "Vessel Collective," shares first place with Barcelona's Gonzalez Hinz Zabala (with landscape architect ASP Landschaftsarchitekten AG).  As a next step, the Foundation will commence parallel negotiations with the two first place winners.

"It would be a reduction of the complexity of the Bauhaus to divide it cleanly into a technical side and an expressive side, yet technical and expressive factors were often in conflict and in conversation throughout its history. The tension between these two motivations-- and specifically the shape that tension took at the Bauhaus-- continues to influence art, architecture, and design today.  Our design of a museum for the Bauhaus Dessau is strongly informed by such productive tension--in this case, the tension between a desire for a modular repeatable system of organization, provided by a grid, and the exploration of sensation found in color and material experimentation.

Our proposal for the Bauhaus Museum Dessau acknowledges these tensions through the design of a building as a collection of individual masses aggregated serially through a grid. We are calling these objects “vessels” as they allude to the crafted object of a vase or volumetric container. The vessels hover above the site on trunk-like legs, creating a light touch in the park and allowing passage underneath. The bellies of the vessels swell to touch each other creating an open continuous floor plan that connects the entire museum with a single floor. These combinations allow the building to fluctuate character between a huddle of singular objects, a sinuous coil of continuity, and a matrix of gridded repetition. Each attitude is at odds with the others, a productive tension resonating through the design."

Founded in 2008, Young & Ayata is a New York–based architectural design studio founded by Michael Young and Kutan Ayata. Young & Ayata view the tensions, overlaps, and frictions created through multiple mediations as the conditions for an aesthetic of estranged realism in architecture. Michael Young earned a Post-Professional MArch degree from Princeton University and a BArch from the California Polytechnic State University, San Luis Obispo. He is a registered architect in the state of New York, and is an assistant professor at the Cooper Union and a visiting lecturer at Princeton University. Kutan Ayata received a BFA in architecture from the Massachusetts College of Art and an MArch from Princeton University. He is a registered architect in the Chamber of Architects in Turkey, and is currently a lecturer at the University of Pennsylvania and an adjunct assistant professor at Pratt Institute.