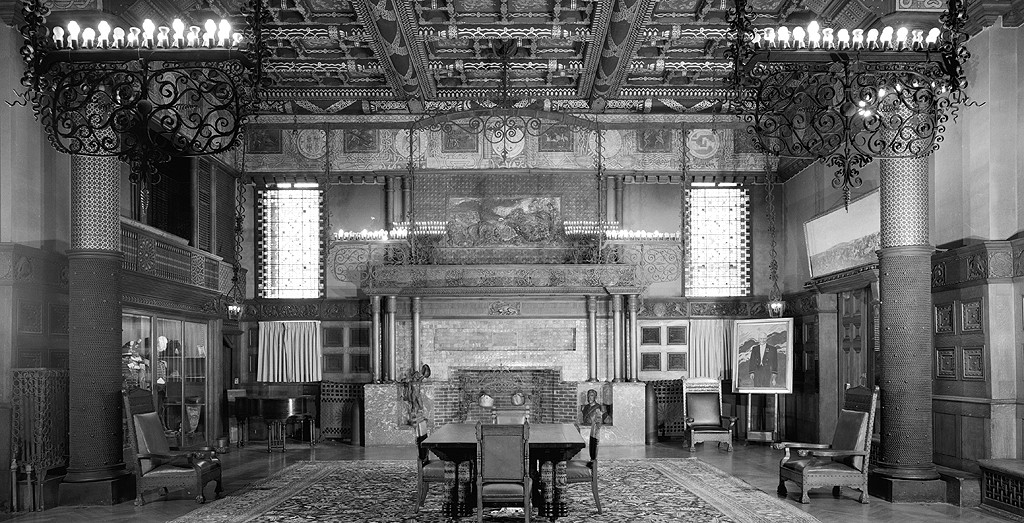 Cities and architectures develop through the stories we tell ourselves, and others, about them. These narratives redefine the city as a statistical entity or an ecological habitat, as personal fiction or as collective myth. Manifest, a Journal of American Architecture and Urbanism, has developed a series of real and para-fictional excursions around the New York-New Jersey metro area that expose the real – and fictional – motivations behind fragments of the built environment. Using buildings as well as rooms and pieces of infrastructure, these ParaTours seek to ignite critical conversations about American cities, their infrastructures and surrounding hinterlands.

Around 1880, teak artifacts, interiors, and entire building facades began to appear in New York. Carved and constructed by Indian artisans, these highly articulated objects appealed to the increasingly exotic tastes of many of New York City’s Gilded Age patrons.

The figure largely responsible for this “teak outbreak”, and for the Indian fashion in US interior decoration at large, was Lockwood de Forest (1850-1932) – a prominent artist and decorator, a life-long associate of Louis Comfort Tiffany, and a member of the Associated Artists, one of the most influential design firms of the period.

Tracing de Forest’s footsteps will lead us through artifacts from India’s nineteenth century teak economy, facilitated by massive infrastructural efforts and scientific innovation that created large scale forest plans and new markets for their products.  The flow of knowledge and materials that linked India and the US was not restricted to designed objects, but led eventually to the creation of planned forests and of a modern forest product industry, often facilitated by the same clientele that purchased de Forest’s wooden architectural elements.

One of the notable narratives within Harlem's architecture has been the re-appropriation of existing building types into spaces of religious congregation--from theaters including the famous Lafayette, Mount Morris and Regent to casinos to institutions such as the former James Fennimore Cooper Junior High School. This co-opting of existing structures means that worship occupies a range of building types as well as scales; retrofitting resulting in the articulation of devotion through ornament and systems of signs overt enough to serve their missions.

Within these fluid intersections we find the greatest resonance of Harlem’s unique relationship with, if not religion, then perhaps religion’s affects. These systems of architectural signage are both reductive and expressive. Reductive through the iconographic symbolism of their facades (the cross, the dome, the crescent) and expressive in their ability to bend forms both platonic and familiar into distorted remnants of clearer counterparts. Such manipulation serves a double-function: articulating the present program of the building, while leaving behind a trace of its layered history; establishing unspoken genealogies between an aesthetics of worship and the cultural heritage of Harlem’s streets.

This tour searches for these details through a micro-tour of the neighborhood: beginning at one of its largest churches and ending at a market announced by two inflatable minarets that sells African-themed jewelry, clothing, and small collectibles. Here, we find products and environment aligned in a collective entanglement that speak to the overlaps of the religious, cultural and physical histories of the neighborhood as told through signs and other versions of spatial, corporeal, and social ornamentation.

A discussion with the Para-tour leaders, the editors of Manifest (Anthony Acciavatti, Justin Fowler, and Dan Handel), and the participants on the day’s activities.

In an effort to appreciate the prescient quality that it’s falling down is simultaneously and asset and liability, we will circumambulate about the Leaning Tower of Green Brook, NJ.

We will tour a concrete-panel building sited in Jersey City. Despite the fact that it was conceived as one of myriad industrially mass-produced buildings, it is a one-of-a-kind object, the sole surviving example of two developments built in the early 1970s using the Descon-Concordia precast system. Part of  “Operation Breakthrough,” a national project started in 1969, the Descon-Concordia system was to provide inexpensive housing for people of any income. In deference to the leader of “Operation Breakthrough,” Dr. Harold B. Finger, a former NASA expert in nuclear-powered interplanetary spacecraft, we will reach Jersey City as if approaching a launching pad. We will observe the range of markings left by personnel Finger recruited from military-industrial complex and the whimsical connections between housing, space research, and aerospace. And so our building shall not be seen as architecture, but as a technological system, just like a rocket. Once at Summit Plaza, we will recall the longstanding claims by artists and architects of the radical Russian avant-garde. It was no other than Kazimir Malevich who in the early twentieth-century suggested that apartment-units should be made in a way that would allow them to fly into cosmic space.

"It's seductive to imagine that a force bigger than capitalism will finally sweep it away.  But what if this thought were coming to us from within capitalism itself? What if capitalism itself relied on fantasies of apocalypse in order to keep reproducing and reinventing itself?  What if, finally,  Nature as such, the idea of a radical outside to the social system,  was a capitalist fantasy,  even precisely the capitalist fantasy?" Timothy Morton, The Ecological Thought

The New York Mercantile Exchange is one of the world's oldest and largest futures and options exchanges.

"Futures" markets actively wager on crop performance, natural resource extraction, and climate events compared to a background of previous seasons. With increasing climate disruption more energy has entered into the market (in the form of atmospheric carbon) creating an economic engine now entirety automated, amplifying the toposphere with weather patterns projected onto a global economy.

In 2015 the New York Mercantile Exchange announced they would be leaving The Earth and entering The Cloud; completing the transition from physical, open outcry floor trading to a purely electronic system.

Now, decades later, post-XXXX, when trading is algorithmic and currency digital, we return to the petrified temple of meteorological capitalism, as anthropologists looking for clues indicating why this artisan trading system evaporated and what it means for the now-present future.

A discussion with the Para-tour leaders, the editors of Manifest (Anthony Acciavatti, Justin Fowler, and Dan Handel), and the participants on the day’s activities.

Manifest ParaTours is organized by Anthony Acciavatti and Justin Fowler of Manifest, a Journal of American Architecture and Urbanism in collaboration with the Princeton-Mellon Initiative in Architecture, Urbanism & the Humanities and the Princeton University School of Architecture.