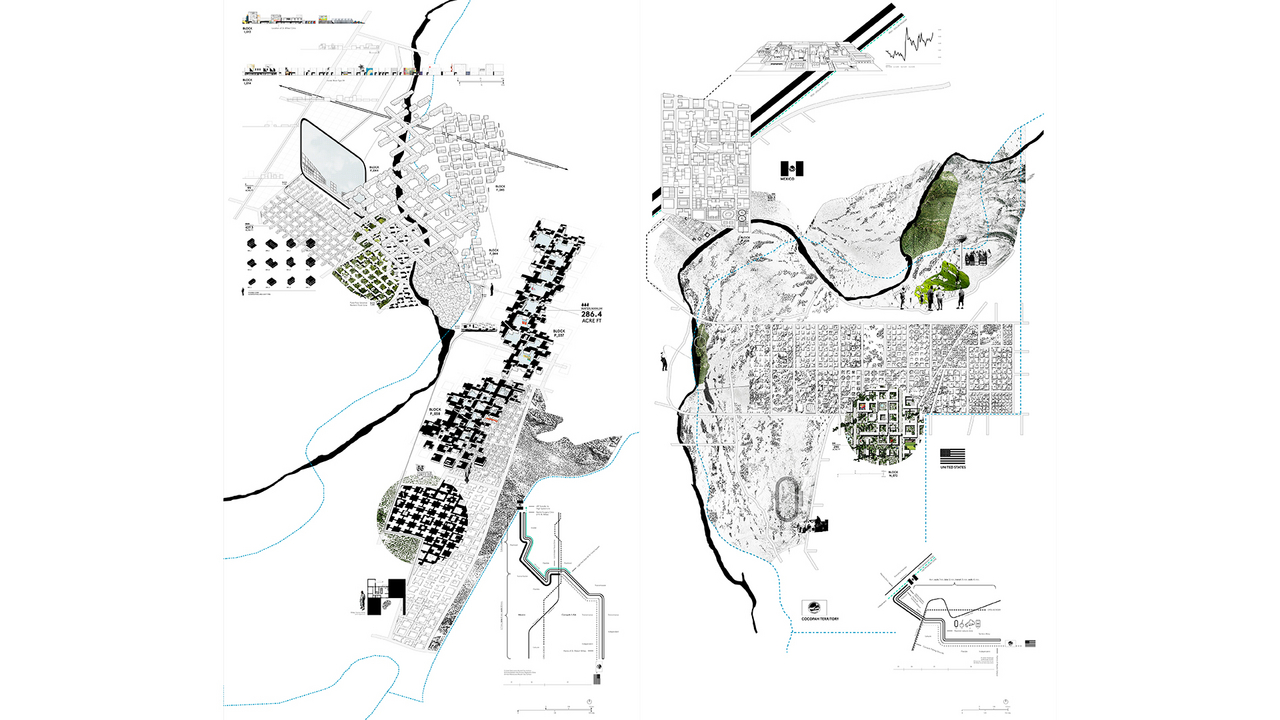 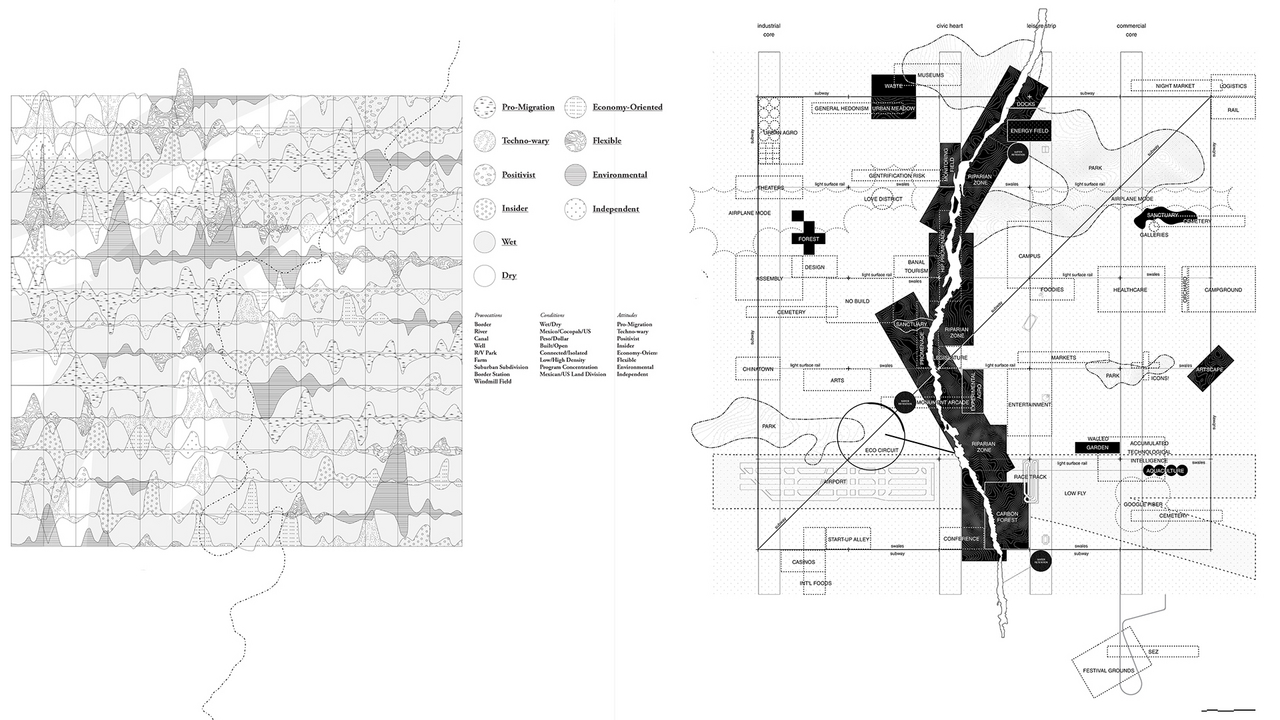 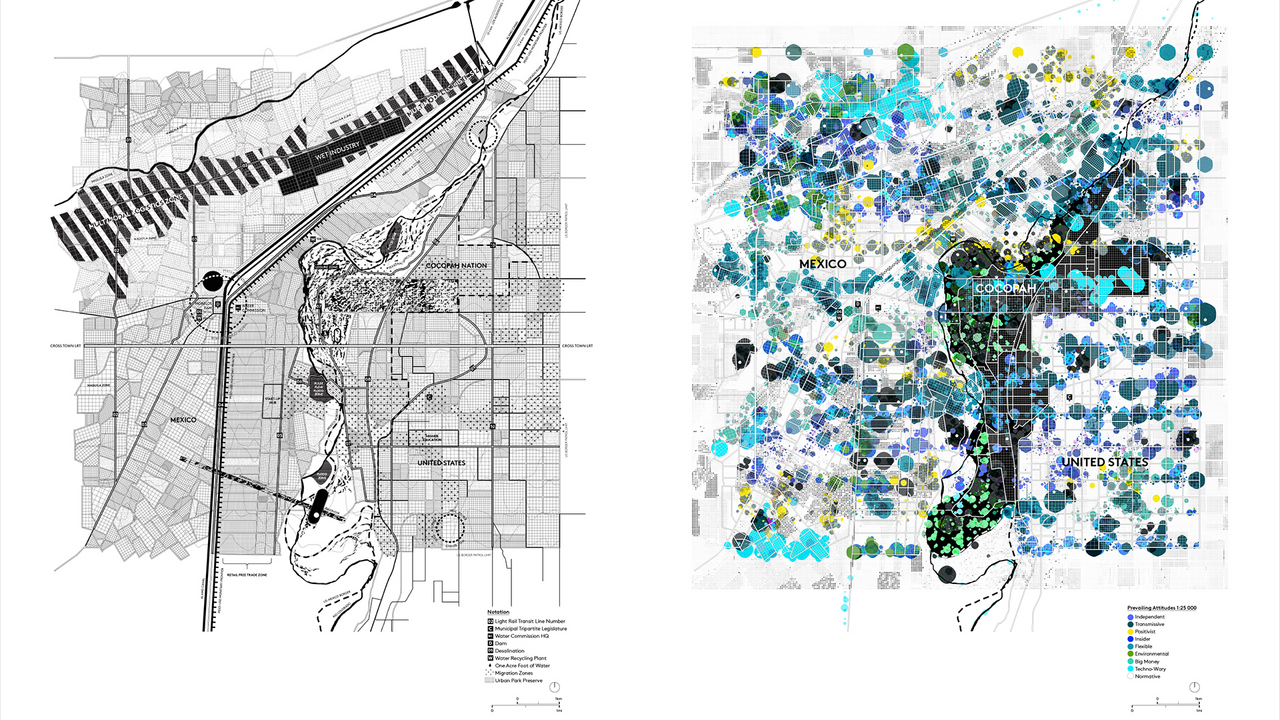 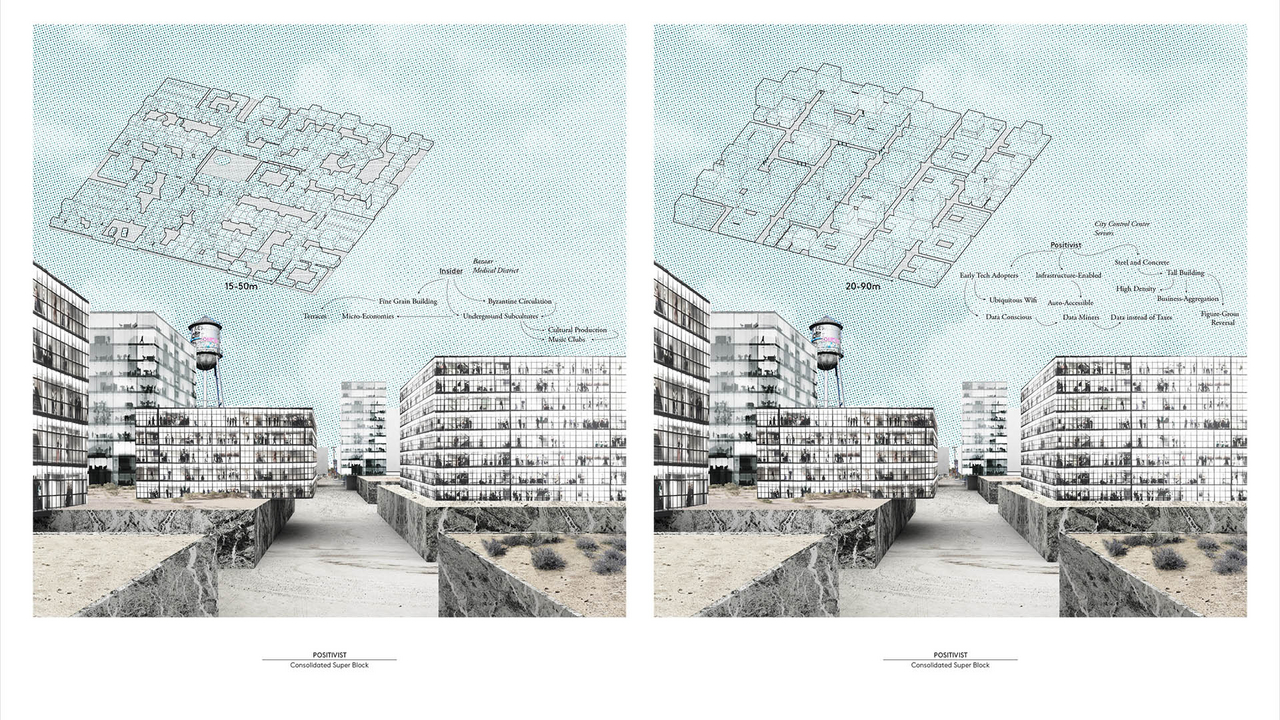 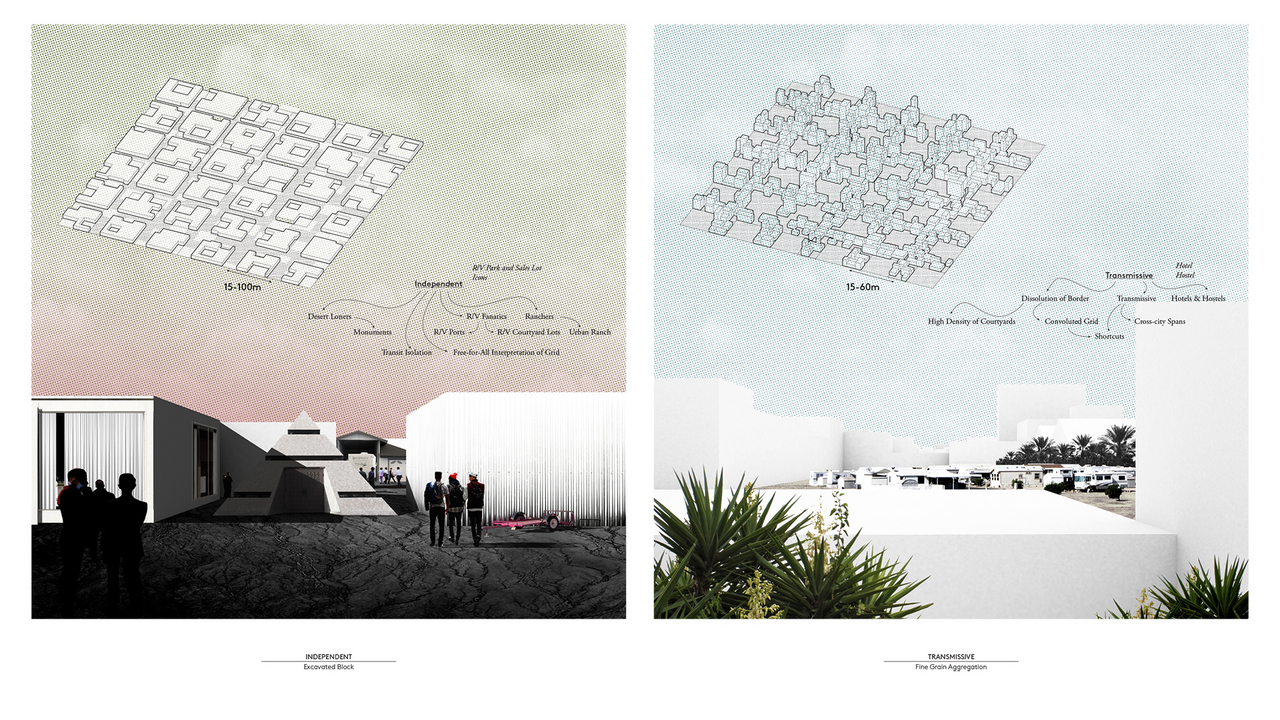 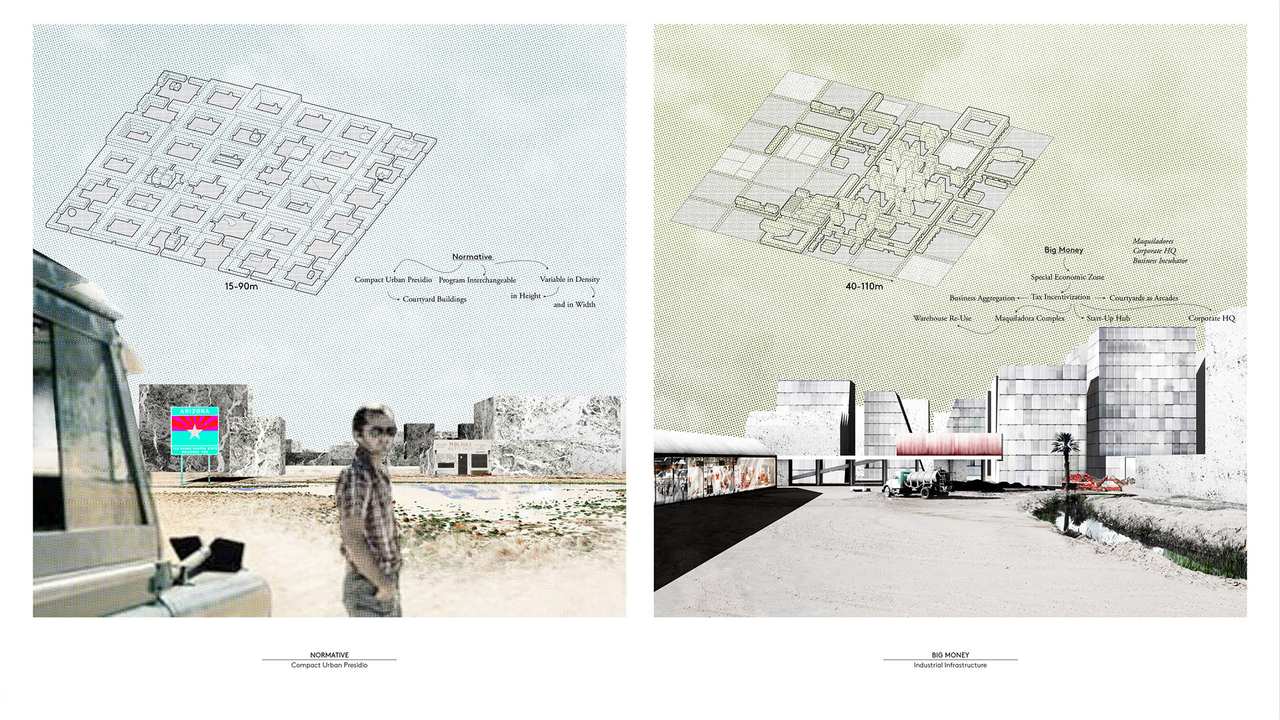 Cities that have twinned on either side of the US-Mexico border demonstrate the mutual advantages of living on the border. Typically, Americans seek cheap goods and labor rates, advantages from incentivized trade programs (Keller Easterling, Extrastatecraft: The Power of Infrastructure Space, (London: Verso, 2014), 18.), and an exotic respite in a foreign territory. South of the border, the United States presents immediate market opportunity and the lure of security for those looking to cross permanently.

Despite the advantages of proximity available to those on either side, the border clearly draws a line between two disparate standards of living, more sharply defined with the introduction of the US border fence.

Once cohesive bi-national cities like Douglas, Naco, and Nogales have been divided; regular crossings are complicated, and prohibited to some. Forms of urban development and the infrastructure they developed along are interrupted by the border’s infrastructural blockade. Despite this recent challenge to cross-border dependencies, cities continue to grow on either side.

There has long been a pattern of internal migration northward from the Mexican interior to capitalize on the perceived quality of life near the US (C. Daniel Dillman, “Urban Growth Along Mexico’s Northern Border and the Mexican National Border Program,” The Journal of Developing Areas, Vol. 4, No. 4 (College of Business, Tennessee State University, 1970), 487.). And in the US, trade agreements allow businesses to set up low-cost operations across the fence.

In bisected cities, the size of a block in an American area will often be identical to that of its Mexican counterpart. A twin urbanism is observed, though the conditions that govern the programming of each side grow more and more distinct.

Through its placement on the border, the city is able to leverage the economic interest in the border region to mediate the disparate living standards on each side by claiming resources available from both countries for the shared use of its inhabitants.

Furthermore, this scheme for an ideal city recognizes that radical difference is crucial to the richness of the urban proposition. The city comprises two twins, conjoined. The trauma of separation is permanently deferred, though each side observes its own identity, generating a productive friction between districts.

The city would inhabit a tri-state scenario (Mexico-Cocopah-United States), offering programmatic opportunities unique to each zone. Just as guest-worker programs allow foreign nationals to enter alien territory to work for allotted periods of time, inhabitants of this city would automatically enter into a notional guest-citizen status when entering neighborhoods across the border. Given the scale and complexity of the city and lack of physical barrier, policing of migration is forced to recede to the urban periphery. This imposed policing boundary encourages the city to densify within its outer limit. As a concession to the US government in tolerating its existence as an extralegal anomaly, the American perimeter of the city meets an easy-to-police agrarian landscape with virtually no built form. The Mexican side is less focused on the prevention of migration and is surrounded by a patchwork of woodlands, dunes, and other natural landscapes. Both of these strategies defiend against the effects of sprawl witnessed in other border communities in the definition of an immutable edge. (Soe W. Myint et al., Simulating Urban Growth on the U.S.-Mexico Border: Nogales, Arizona and Nogales, Sonora. (Phoenix: GeoDa Center for Geospatial Analysis and
Computation, 2010), 21.)

The overarching grid of the city is extracted from the outlines of existing agricultural plots: regular and orthogonal on the American side, irregular and frenzied on the Mexican. Ironically, however, Mexican border cities exhibit more regular grid plans than their American counterparts. Since recent studies indicate these Mexican cities with regular grids contain sprawl better than their American neighbors (who now build outward using suburban models), the Mexican plots will be reconciled with their own grid system to anticipate future density (Ibid., 4). On either side of the border, smaller plots beget smaller subdivision (see sketch attached).

In the wake of rapid urban development along the border, cities have expanded at the expense of open and vegetated areas (Ibid., 5). From theoutset, this new city on the border will designate protected zones as nature preserves to mitigate this issue.

The object of the proposition is to multiply the conditions of the border to enrich the urban condition.