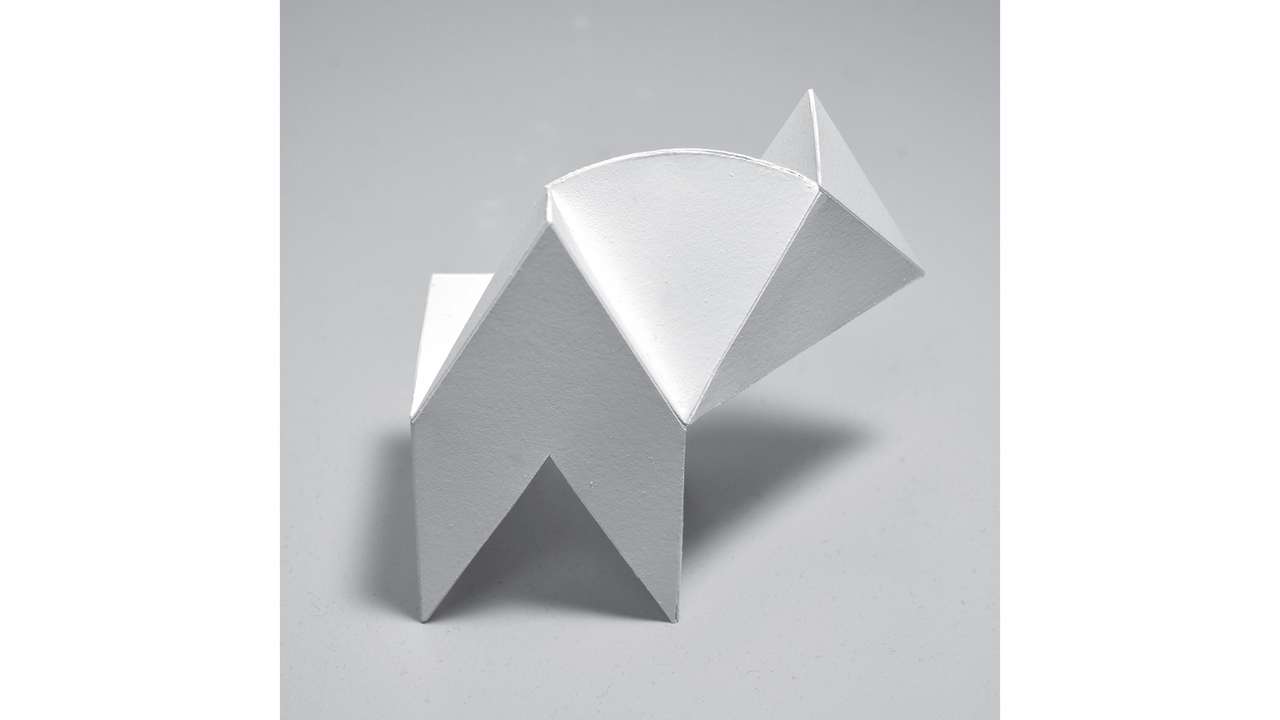 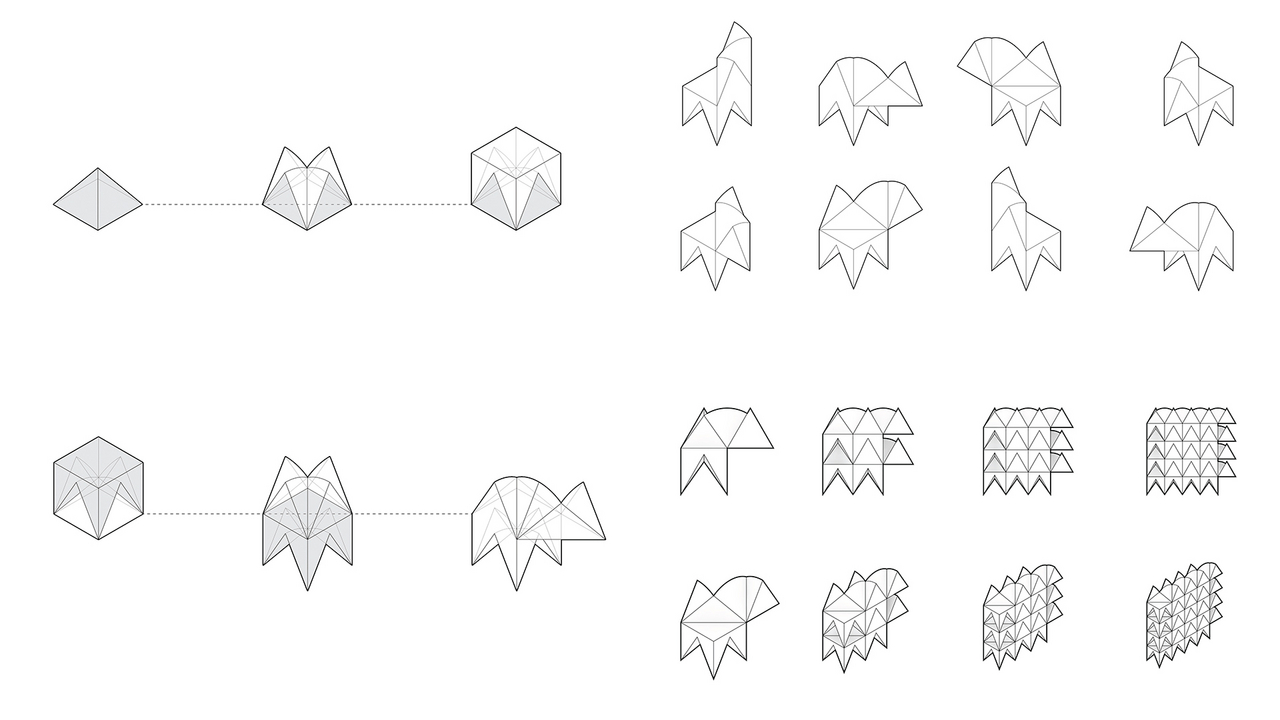 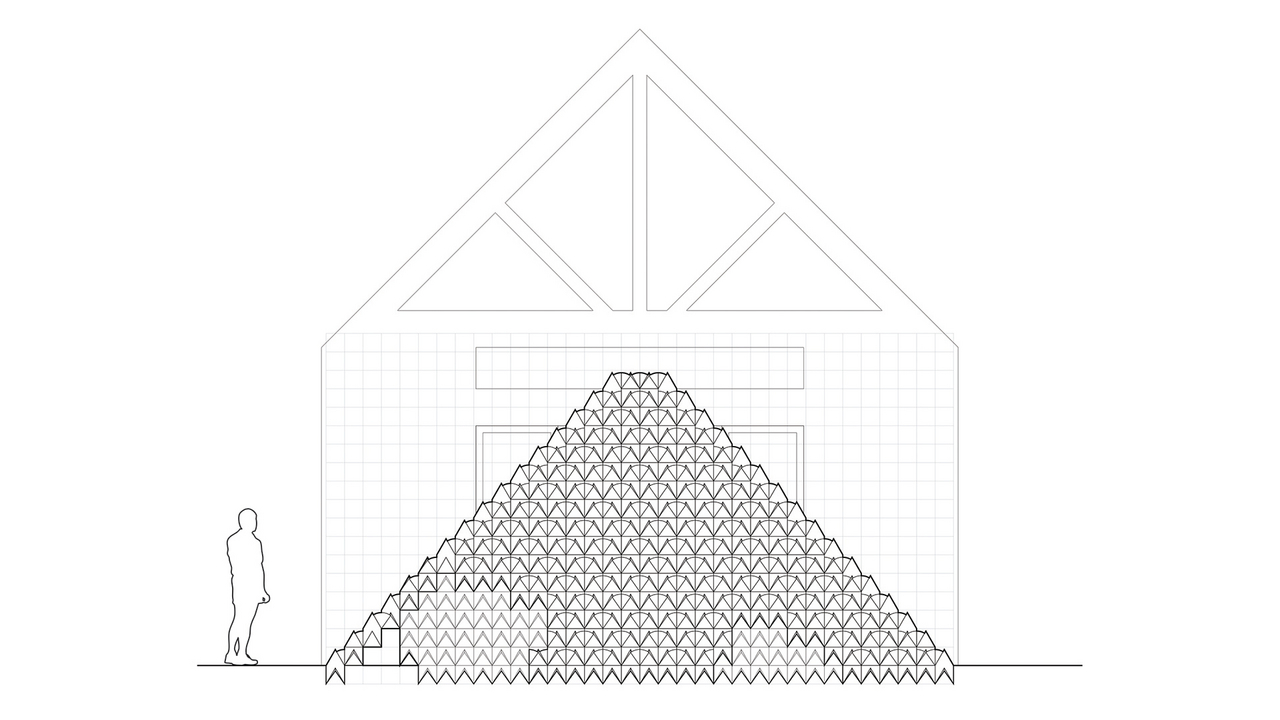 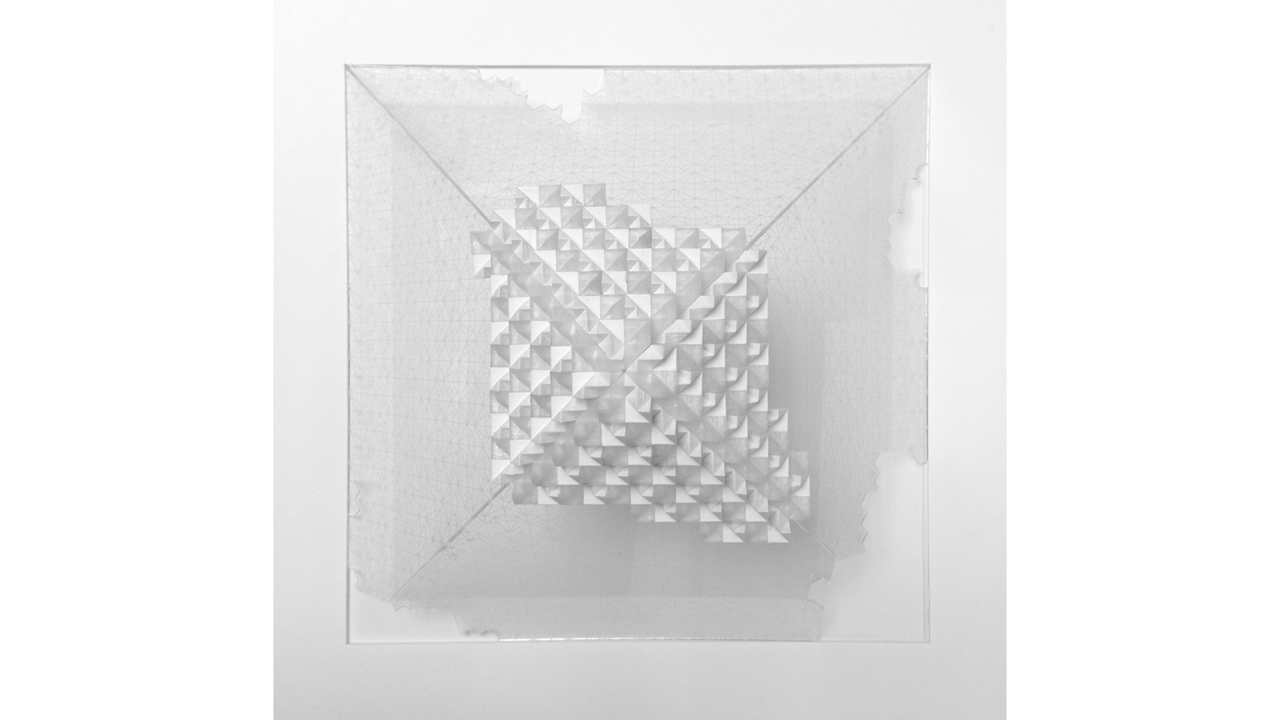 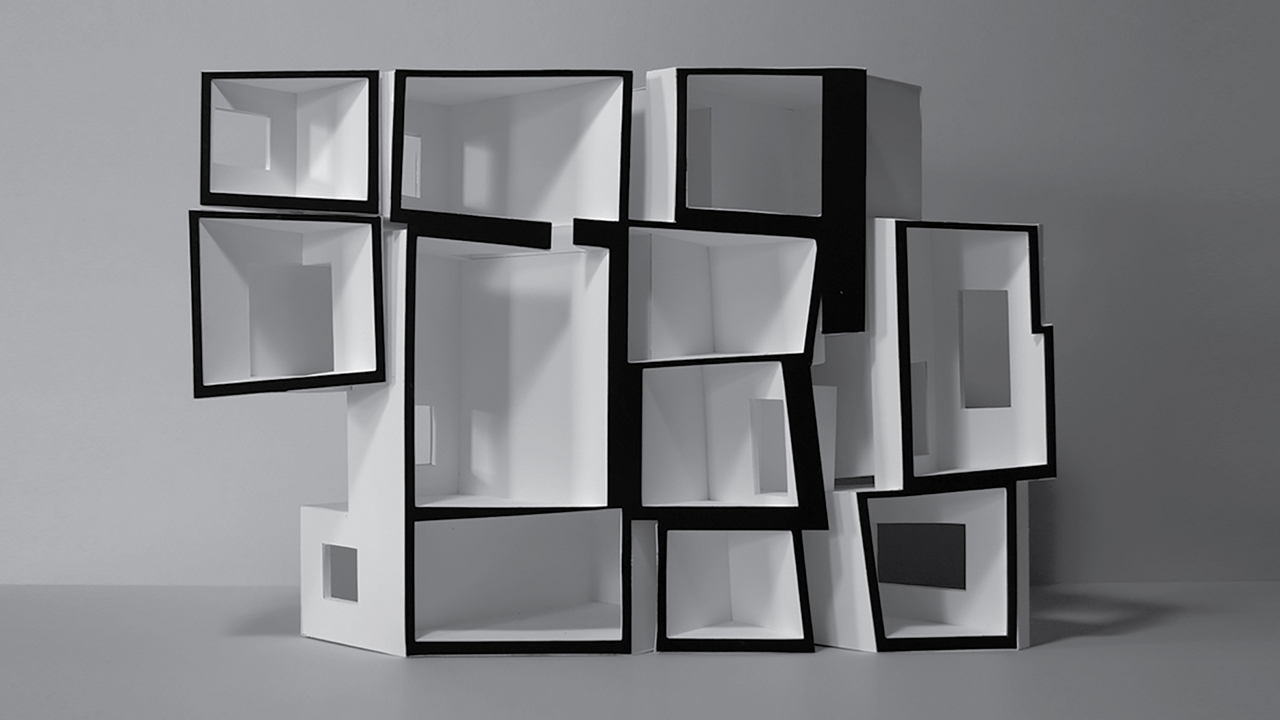 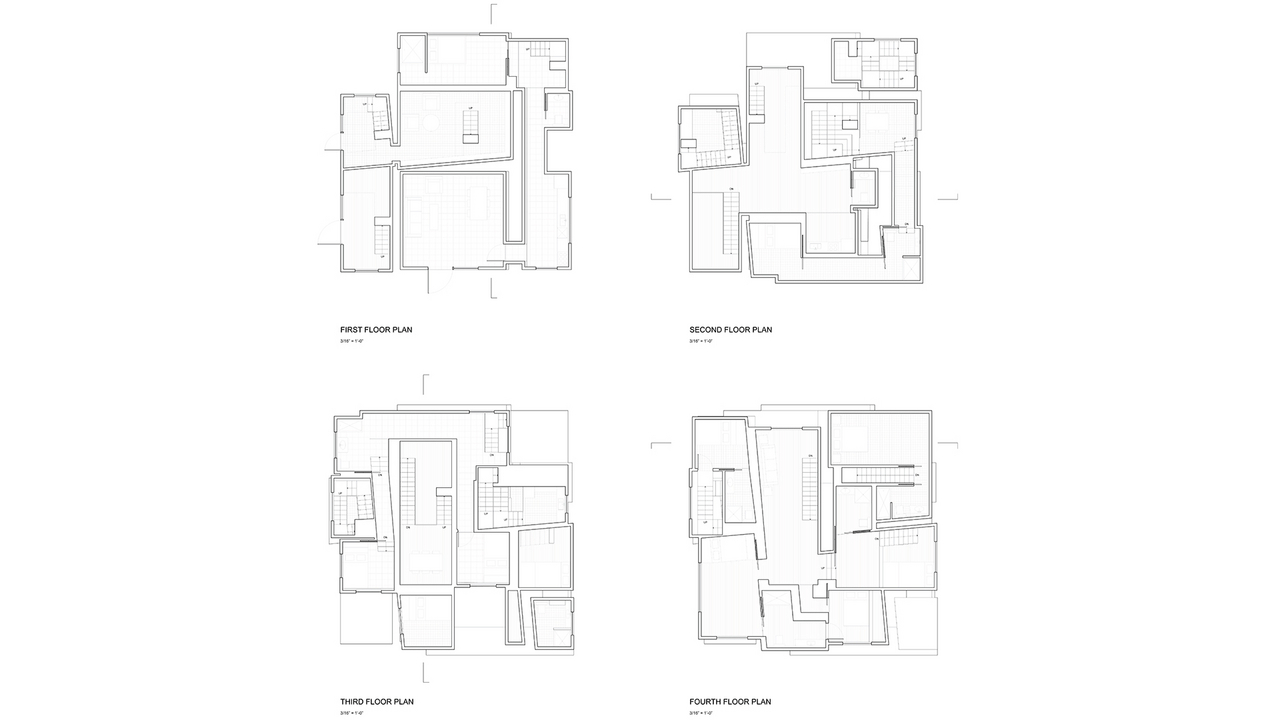 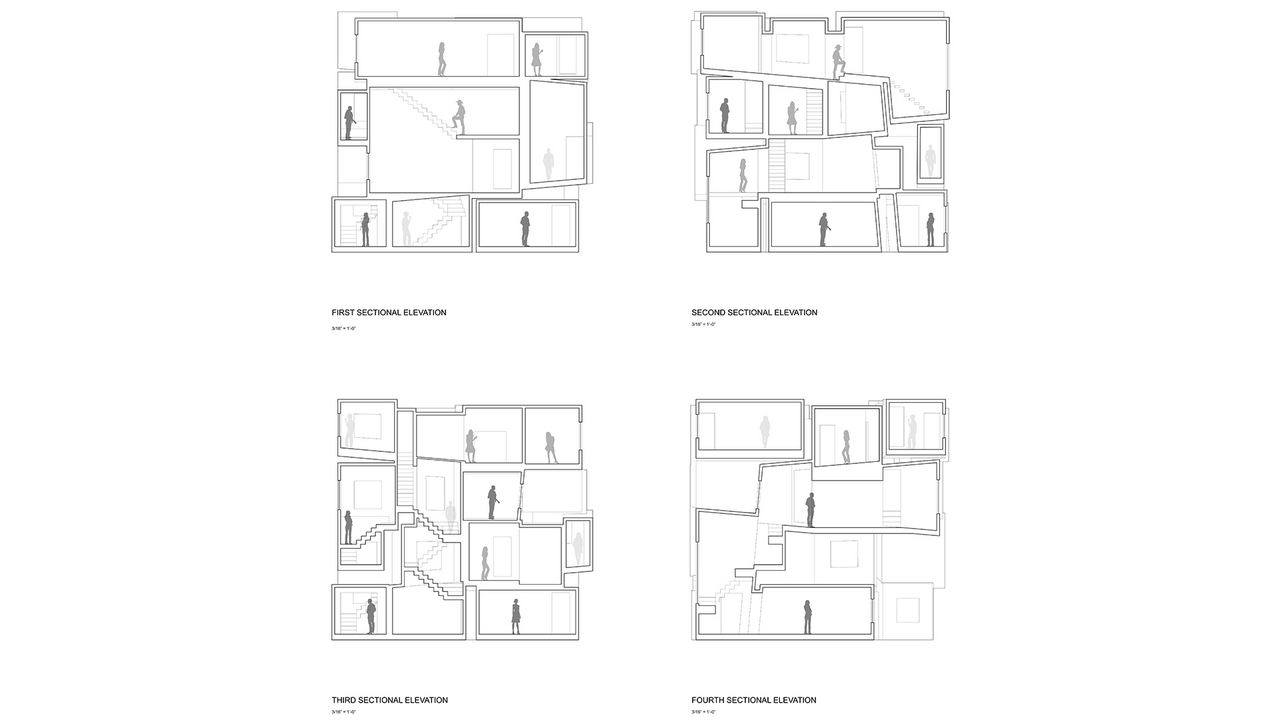 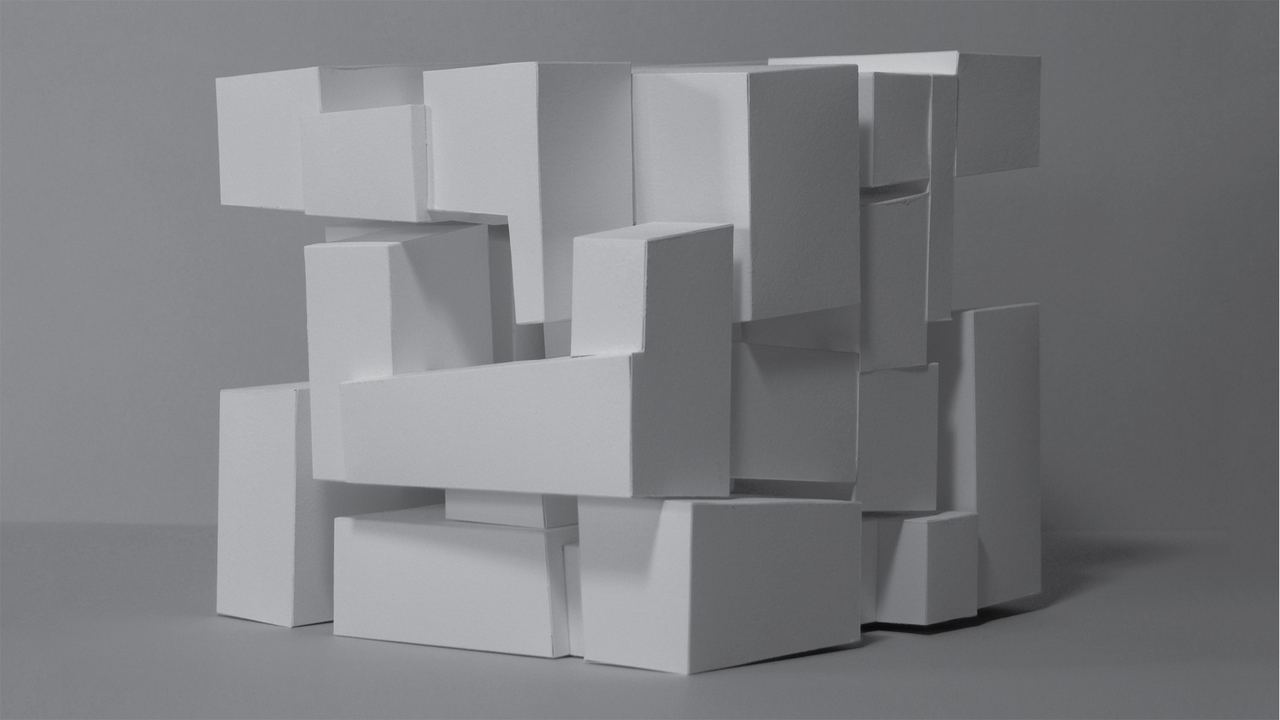 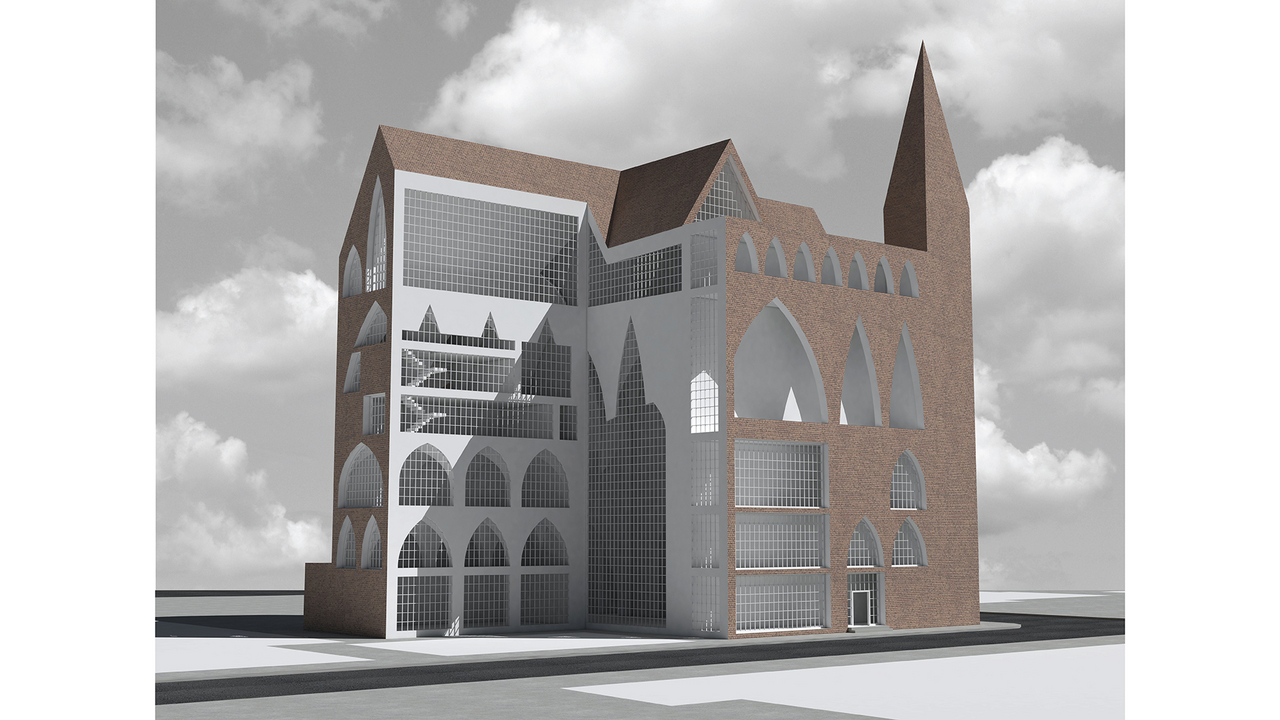 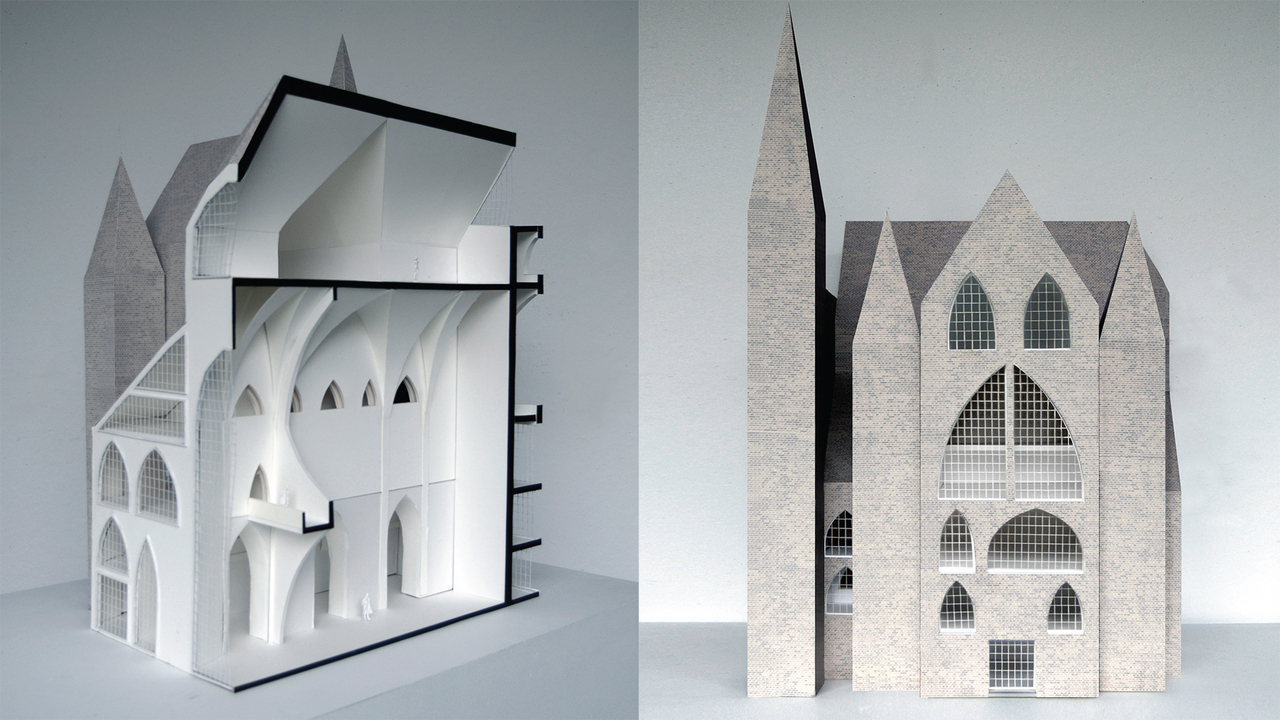 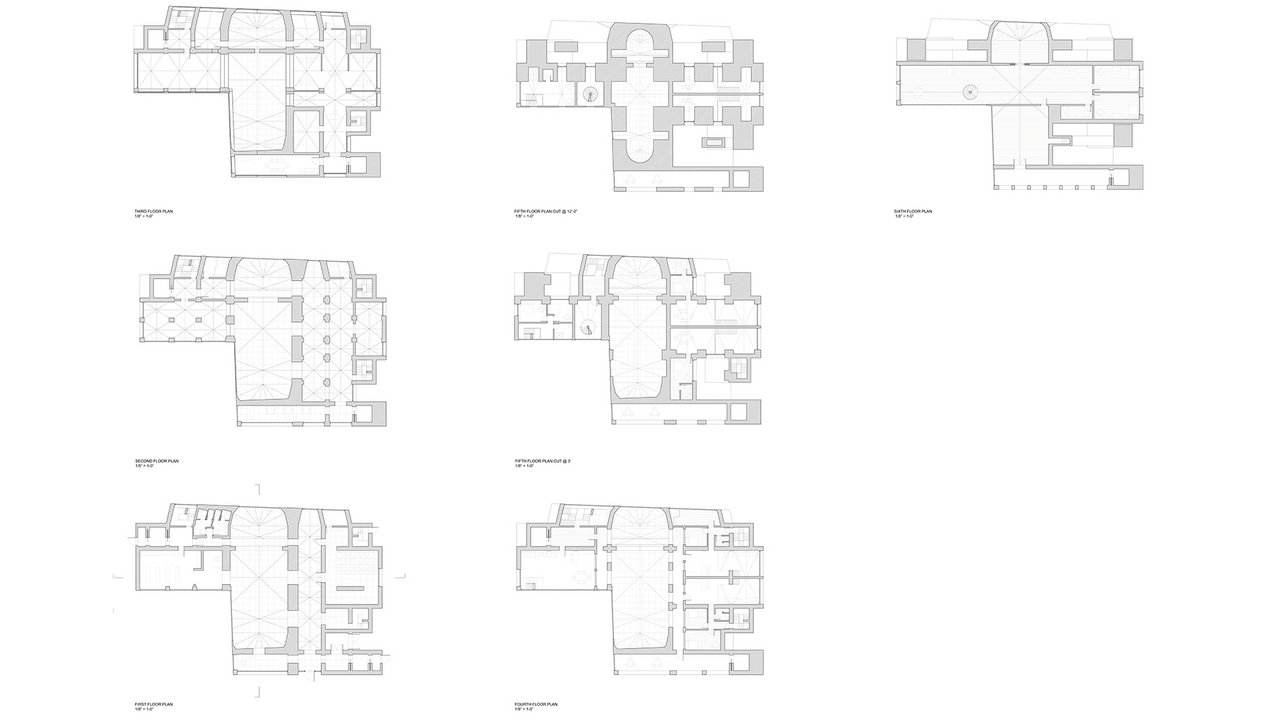 A masonry pavilion is proposed for downtown Princeton. The masonry unit developed for this project is a figural brick approximately the same size as a standard CMU. The unit interlocks when stacked and, along
with its mirror image, turns a ninety degree corner and joins face-to-face. The brick is proposed as a three-dimensional drawing, drawn by unfolding one architectural primitive, the pyramid, and subtracting it from a second primitive, the cube, as shown. The resulting form retains the suggestion of the movements performed in its creation, giving it the appearance of directionality.

The brick is used to build an almost monolithic pavilion, recreating the pyramidal shape from which the unit originates. The shape and size of the pyramid echo the A-frame building located at 60 Witherspoon Street, in front of which the pavilion sits. The strong figure of the brick begins to be erased when it is aggregated and repeated at this scale; the geometry emerges only along the outline of the pavilion and along the broken edges which afford a glimpse inside the structure. The scale and size of the object and its openings draw into question the boundaries between sculpture, interior, and building. The interior of the brick is even further erased when it is stacked vertically into a smooth wall, on which the geometry is registered only by the patterns of the joins, inviting the viewer to think about what lies inside of a wall.

This apartment building in downtown Princeton is loosely based on a sixteen-square, or sixty-four cube, grid. The spaces deviate from the grid within a limited tolerance, creating a "loose fit." In this compositional strategy, similar shapes are repeated but altered to effect a slightly disrupted rhythm. The loose fit allows new figures to emerge and draws attention to negative space and the balanced relationships between parts. This creates different poche conditions where secondary programmatic elements like staircases, storage, and water closets can be housed, so that the primary spaces retain their integrity without subdivision.

The loose-fitting spaces are aggregated to make three interlocking three-bedroom apartments. The related but different forms and aggregations create apartments which share the same formal language but have very different characters in terms of their use. Apartment A has a large centralized core including living, dining, and cooking space, all open to each other. In Apartment B, all rooms except guest rooms are on the
ground floor, allowing ease of access and privacy to the guests. Apartment C affords the most privacy to each resident, as all bedrooms have separate access routes from the ground floor.

This scheme of interlocking apartments begins to suggest a new model of multi-family housing. In some spaces, particularly in the circulation, a resident may be well aware of his proximity to his neighbor thanks to wall thickness and aperture placement, whereas in the bedrooms, a greater amount of insulation allows the resident quiet and privacy, in some cases far away from the rest of his own apartment. This housing scheme creates an alternative to the most common contemporary model of urbanism which seeks to provide isolation from and obliviousness of one's neighbors. Instead, this model allows for privacy while also reminding residents of the interconnectedness of modern urban society.

This proposal for a multiuse live/work/gallery space in downtown Princeton investigates the role of (anachronic) historicism in contemporary architecture and in the town. Princeton is defined largely by the university campus, which is dominated by Gothic architecture, although scant reference to the Gothic is found in downtown Princeton. This project proposes to integrate the Gothic aesthetic of the campus with the brick brutalist aesthetic of the town center. What does it mean to make Gothic architecture today? This translation takes as its starting point an early European Gothic cathedral, rather than 19th-century Gothic interpretations, but cannot help taking on board the baggage of intervening architecture, including Baroque spatial transformation, modernist (minimal) materiality, and post-modern attitude and cutting operations.

The composition begins with a Gothic cathedral type, calibrated to the site dimensions, then cut by the footprints of the surrounding buildings. The cuts disrupt the two major axes of symmetry, doubling them to create four conflicting lines of symmetry. In a move borrowed from Baroque hotel composition, local symmetries are favored in places over global symmetry, creating different appearances of symmetry from different vantage points within the building. The outside of the building retains the appearance of a "cut" cathedral, but the inside, particularly in the public spaces,
deforms to accommodate the cut.

In repurposing the cathedral form for a multiuse building, this project proposes a more unified model of public/private space than is typical today. In particular, the gallery is a unifying space: the nave spans the height of five floors, sharing floors with the offices and all of the apartments. Instead of outdoor balcony space, the apartments have open promenades onto the nave, to look down to exhibitions and activity in the main space of the gallery. Residents have private entrances but also can access their apartments by the primary elevator, encouraging interaction with the gallery and
offices.