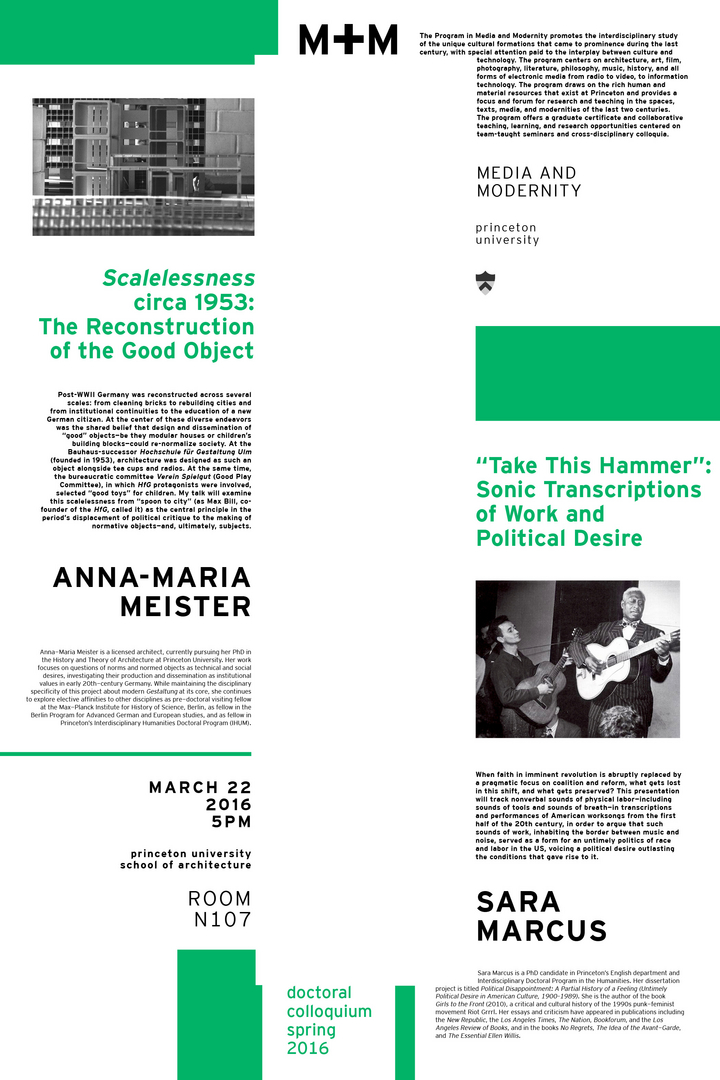 When faith in imminent revolution is abruptly replaced by a pragmatic focus on coalition and reform, what gets lost in this shift, and what gets preserved? This presentation will track nonverbal sounds of physical labor—including sounds of tools and sounds of breath—in transcriptions and performances of American worksongs from the first half of the 20th century, in order to argue that such sounds of work, inhabiting the border between music and noise, served as a form for an untimely politics of race and labor in the US, voicing a political desire outlasting the conditions that gave rise to it.

Sara Marcus is a PhD candidate in Princeton’s English department and Interdisciplinary Doctoral Program in the Humanities. Her dissertation project is titled Political Disappointment: A Partial History of a Feeling (Untimely Political Desire in American Culture, 1900–1989). She is the author of the book Girls to the Front (2010), a critical and cultural history of the 1990s punk-feminist movement Riot Grrrl. Her essays and criticism have appeared in publications including the New Republic, the Los Angeles Times, The Nation, Bookforum, and the Los Angeles Review of Books, and in the books No Regrets, The Idea of the Avant-Garde, and The Essential Ellen Willis.

ANNA-MARIA MEISTER, "Scalelessness circa 1953: The Reconstruction of the Good Object"

Post-WWII Germany was reconstructed across several scales: from cleaning bricks to rebuilding cities and from institutional continuities to the education of a new German citizen. At the center of these diverse endeavors was the shared belief that design and dissemination of “good” objects—be they modular houses or children’s building blocks—could re-normalize society. At the Bauhaus-successor Hochschule für Gestaltung Ulm (founded in 1953), architecture was designed as such an object alongside tea cups and radios. At the same time, the bureaucratic committee Verein Spielgut (Good Play Committee), in which HfG protagonists were involved, selected “good toys” for children. My talk will examine this scalelessness from “spoon to city” (as Max Bill, co-founder of the HfG, called it) as the central principle in the period’s displacement of political critique to the making of normative objects—and, ultimately, subjects.

Anna-Maria Meister is a licensed architect, currently pursuing her PhD in the History and Theory of Architecture at Princeton University. Her work focuses on questions of norms and normed objects as technical and social desires, investigating their production and dissemination as institutional values in early 20th-century Germany. While maintaining the disciplinary specificity of this project about modern Gestaltung at its core, she continues to explore elective affinities to other disciplines as pre-doctoral visiting fellow at the Max-Planck Institute for History of Science, Berlin, as fellow in the Berlin Program for Advanced German and European studies, and as fellow in Princeton’s Interdisciplinary Humanities Doctoral Program (IHUM).