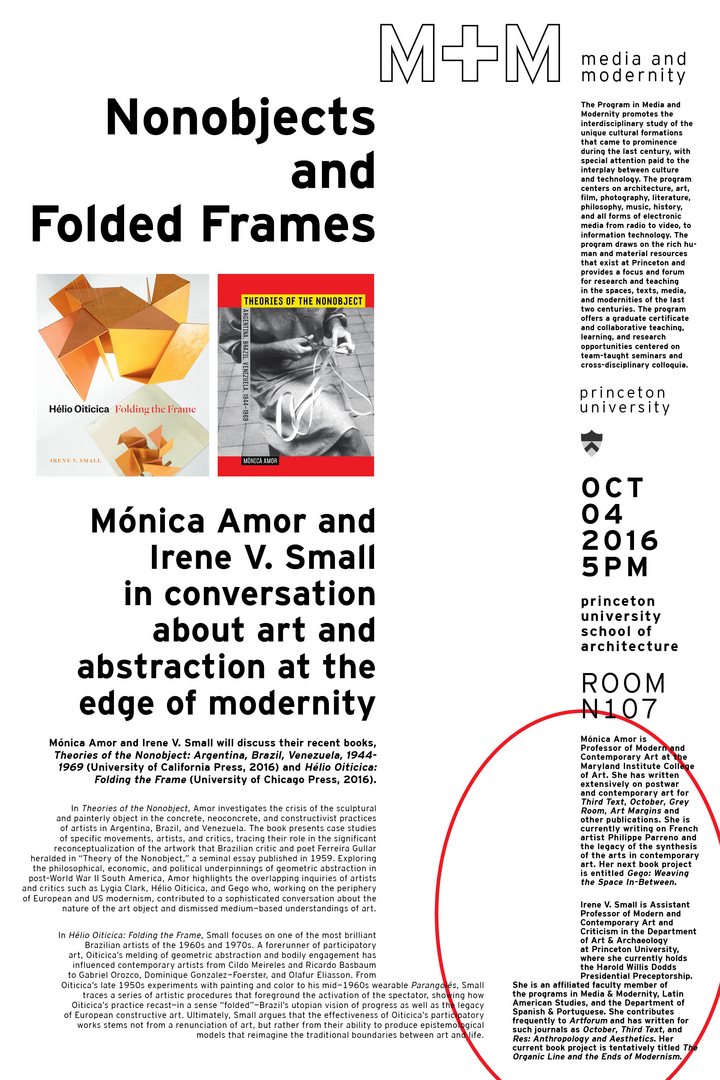 Mónica Amor and Irene V. Small in conversation about art and abstraction at the edge of modernity

In Theories of the Nonobject, Amor investigates the crisis of the sculptural and painterly object in the concrete, neoconcrete, and constructivist practices of artists in Argentina, Brazil, and Venezuela. The book presents case studies of specific movements, artists, and critics, tracing their role in the significant reconceptualization of the artwork that Brazilian critic and poet Ferreira Gullar heralded in “Theory of the Nonobject,” a seminal essay published in 1959. Exploring the philosophical, economic, and political underpinnings of geometric abstraction in post–World War II South America, Amor highlights the overlapping inquiries of artists and critics such as Lygia Clark, Hélio Oiticica, and Gego who, working on the periphery of European and US modernism, contributed to a sophisticated conversation about the nature of the art object and dismissed medium-based understandings of art.

In Hélio Oiticica: Folding the Frame, Small focuses on one of the most brilliant Brazilian artists of the 1960s and 1970s. A forerunner of participatory art, Oiticica’s melding of geometric abstraction and bodily engagement has influenced contemporary artists from Cildo Meireles and Ricardo Basbaum to Gabriel Orozco, Dominique Gonzalez-Foerster, and Olafur Eliasson. From Oiticica’s late 1950s experiments with painting and color to his mid-1960s wearable Parangolés, Small traces a series of artistic procedures that foreground the activation of the spectator, showing how Oiticica’s practice recast—in a sense “folded”—Brazil’s utopian vision of progress as well as the legacy of European constructive art. Ultimately, Small argues that the effectiveness of Oiticica’s participatory works stems not from a renunciation of art, but rather from their ability to produce epistemological models that reimagine the traditional boundaries between art and life.

Mónica Amor is Professor of Modern and Contemporary Art at the Maryland Institute College of Art. She has written extensively on postwar and contemporary art for Third Text, October, Grey Room, Art Margins and other publications. She is currently writing on French artist Philippe Parreno and the legacy of the synthesis of the arts in contemporary art. Her next book project is entitled Gego: Weaving the Space In-Between.

Irene V. Small is Assistant Professor of Modern and Contemporary Art and Criticism in the Department of Art & Archaeology at Princeton University, where she currently holds the Harold Willis Dodds Presidential Preceptorship. She is an affiliated faculty member of the programs in Media & Modernity, Latin American Studies, and the Department of Spanish & Portuguese. She contributes frequently to Artforum and has written for such journals as October, Third Text, and Res: Anthropology and Aesthetics. Her current book project is tentatively titled The Organic Line and the Ends of Modernism.