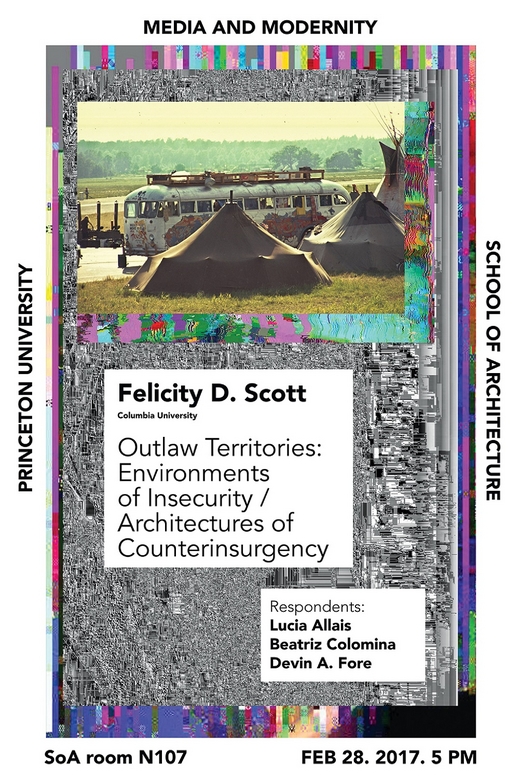 This talk will address Outlaw Territories: Environments of Insecurity/Architectures of Counterinsurgency, recently published by Zone Books (April 2106). Focused on the 1960s and 1970s, the book revisits an era when both architects and figures from the American counterculture sought to play a role in global environmental governance and the management of populations, asking how they might have assumed such a mantle and with it a certain moral and technocratic authority. It investigates how both architects and other players responded to, and how they were implicated within, a volatile historical period whose concerns remain all too familiar today: rising urban instabilities within both the “West” and the so-called developing world; environmental discourses mobilizing the rhetoric of emergency and planetary togetherness; Western panic over population growth in the Global South; rapid transformations in communication technologies and expanded forms of environmental control; increased militarism and forces of globalization; and rising claims to self-determination and environmental justice. Attending to the expanded matrix within which architecture operated, and continues to operate, I will speak to how and why the discourses, struggles, and conflicts of the period became institutionalized to the point of remaining all-too-familiar today, five decades later.

Felicity D. Scott is director of the PhD program in Architecture (History and Theory), and co-director of the program in Critical, Curatorial and Conceptual Practices in Architecture (CCCP) at the Graduate School of Architecture, Planning and Preservation, Columbia University. In addition to publishing numerous articles in journals, magazines, and edited anthologies, she has published Architecture or Techno-Utopia: Politics After Modernism (MIT Press, 2007), Living Archive 7: Ant Farm (ACTAR, 2008), Disorientation: Bernard Rudofsky in the Empire of Signs(Sternberg Press, 2016), and Outlaw Territories: Environments of Insecurity/Architectures of Counter-Insurgency (Zone Books, 2016).

Lucia Allais is Assistant Professor of Architecture at Princeton University. Her forthcoming book Designs of Destruction is a history of monument survival and international bureaucracy in the 20th Century. She is a member of the Aggregate Architectural Collaborative and an editor of Grey Room.

Beatriz Colomina is Professor of Architecture and co-director of the Program in Media and Modernity at Princeton University. Her last book Are We Human? Notes on an Archaeology of Design co-written with Mark Wigley (Lars Müller, 2016) offers a multi-layered exploration of the intimate relationship between human and design and rethink the philosophy of design in a multi-dimensional exploration from the very ﬁrst tools and ornaments to the constant buzz of social media.

Devin A. Fore is a Professor of German and affiliate faculty in the Program in Media and Modernity, the Department of Comparative Literature and the Department of Slavic Languages and Literatures. He is author of Realism after Modernism (MIT, 2012), and All the Graphs, a study of Soviet factography, is forthcoming from The University of Chicago Press.