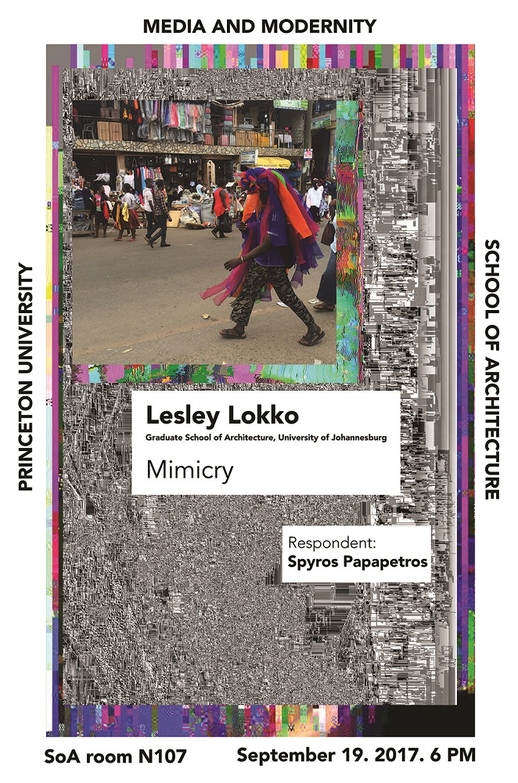 b) an instance of mimicking.

2.   Biology: the resemblance of one organism to another, or to an object in its surroundings for concealment and protection from predators. In evolutionary biology, mimicry is a similarity of one species to another, which protects one or both. This similarity can be in appearance, behaviour, sound, scent or location. Mimics are typically found in the same areas as their models.

The pervasive condition of African architectural education and practice is one of mimicry, in which students and architects are (sub-consciously) driven to copy ‘solutions’ posed by practitioners outside the continent, most typically European or American, whose understanding and experience of Africa is often limited in nature. Wired, switched-on and connected, current and future young African architects are able, at the click of a finger, to peruse the ‘appearance, behaviour and [even] scent and sound’ of buildings and architectural projects that they may never experience ‘in the flesh’, but whose form, material and programmes are multiplying across the continent in ways and places that their original ‘makers’ could not possibly have imagined.

Unlike biological mimics, in this context a ‘cut-and-paste’ approach neither protects nor conceals: it simply exposes. As far back as 1997, the Dutch architect and theorist, Rem Koolhaas, argued that it had become ‘increasingly important for architects to operate on a level independent of architecture in order to understand, at the most basic level, the phenomena affecting the development of architecture and the city.’ In this presentation, rather than treat ‘cut-and-paste’ as pastiche, a quick-fix intervention that solves the ‘problem’ of original thinking, a new proposition for An Architectural Brief, for An (As Yet) Unnamed African Architectural Student, in An (As Yet) Unnamed African Location is put forward, which fuses art, culture & digital technology to demand a radical, post-Afro/colonial scholarship.

Lesley Lokko is an architect, academic and the author of ten best-selling novels. She is currently Head of School of the Graduate School of Architecture at the University of Johannesburg. She studied at the Bartlett School of Architecture, University College London, graduating with a BSc(Arch) in 1992 and an MArch in 1995, before going on to gain her PhD in Architecture from the University of London in 2007. She has taught at schools of architecture in the US, UK and South Africa. She is the editor of White Papers, Black Marks: Race, Culture, Architecture (University of Minnesota Press, 2000) and over the past two decades, has ben an on-going contributor to discourses around identity, race, African urbanism and the speculative nature of African architectural space and practice. For over a decade, she has juggled two very different careers simultaneously, though not always smoothly. ​

Spyros Papapetros is Associate Professor of History and Theory at the School of Architecture and a member of the Program in Media and Modernity at Princeton University. He is the author of On the Animation of the Inorganic: Art, Architecture, and the Extension of Life (The University of Chicago Press, 2012) and co-editor of Retracing the Expanded Field. Encounters between Art and Architecture (The MIT Press, 2014)