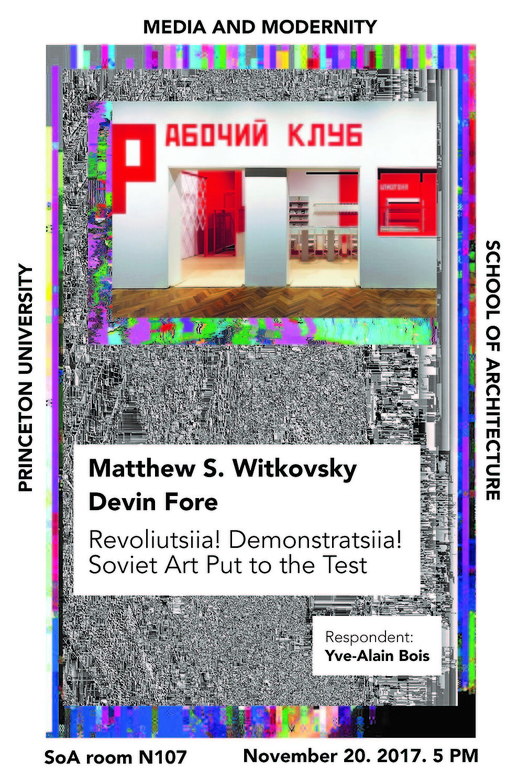 The current major exhibition at the Art Institute of Chicago showcases Soviet Russia as a testing ground for models of all kinds. Matthew S. Witkovsky and Devin Fore, co-editors of the exhibition catalogue, discuss the project and key issues in studies of Soviet art today.

Published on the centenary of the Russian Revolution, this landmark book gathers information from the forefront of current research in early Soviet art, providing a new understanding of where art was presented, who saw it, and how the images incorporated and conveyed Soviet values. More than 350 works are grouped into areas of critical importance for the production, reception, and circulation of early Soviet art: battlegrounds, schools, the press, theaters, homes and storefronts, factories, festivals, and exhibitions. Paintings by El Lissitzky and Liubov Popova are joined by sculptures, costumes and textiles, decorative arts, architectural models, books, magazines, films, and more.

Matthew S. Witkovsky is Sandor Chair and Curator of Photography at the Art Institute of Chicago, and curator of important survey exhibitions on central European modernism, Conceptual Art, and the Japanese 1960s movement Provoke. His exhibition Revoliutsiia! Demonstratsiia! Soviet Art Put to the Test debuted in Venice alongside the 2017 Biennale and runs at the Art Institute through January 15, 2018. He has curated more than 20 exhibitions in all, and authored ten books as well as numerous essays for Artforum, October, The Art Bulletin, History of Photography, and other journals and magazines.

Yve-Alain Bois. A specialist in twentieth-century European and American art, Bois is recognized as an expert on a wide range of artists, from Henri Matisse and Pablo Picasso to Piet Mondrian, Barnett Newman, and Ellsworth Kelly. He has curated and co-curated a number of influential exhibitions, including Piet Mondrian, A Retrospective (1994); L’informe, mode d’emploi  1996); Matisse and Picasso: A Gentle Rivalry (1999); and Picasso Harlequin 1917-1937 (2008). His books include Ellsworth Kelly: Catalogue Raisonné of Paintings, Reliefs, and Sculpture: Vol. 1, 1940-1953 (2015); Matisse in the Barnes Foundation (2015); Art Since 1900 (with Benjamin Buchloh, Hal Foster, and Rosalind Krauss, 2004); Matisse and Picasso (1998); Formless: A User’s Guide (with Rosalind Krauss, 1997); and Painting as Model (1990).