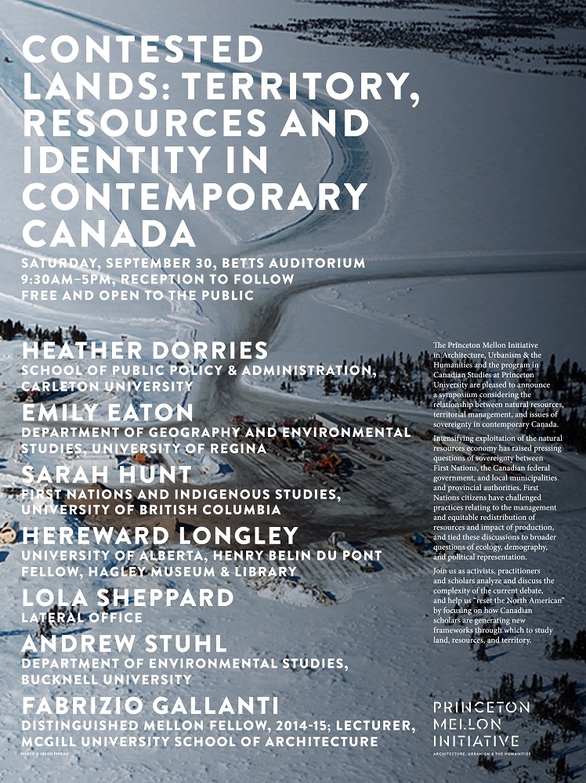 The Princeton Mellon Initiative in Architecture, Urbanism & the Humanities and the program in Canadian Studies at Princeton University are pleased to announce a symposium considering the relationship between natural resources, territorial management, and issues of sovereignty in contemporary Canada.

Within a centuries-long struggle for justice, the recent intensification of the activities of exploitation of natural resources economy has raised pressing questions of sovereignty between First Nations, the Canadian federal government, and local municipalities and provincial authorities. First Nations citizens have challenged practices relating to the management and equitable redistribution of resources and impact of production, and tied these discussions to broader questions of ecology, demography, and political representation. These contested positions appear to be most legible in regions such as the Alberta tar-sands or around the hydroelectric power stations of Northern Quebec, but all such discussions have raised questions about who owns the land and its resources, and what models of development and governance will help the peoples of Canada most effectively address issues of climate change and sustainability. Such tendencies are inscribed within a wider rethinking of the political landscape of the country, its history and the relationships between its different communities, represented in the new treaties being negotiated and signed between First Nations and different branches of government.

By including different voices from activists, practitioners and scholars, the symposium “Contested Lands: Territory, Resources, and Identity in Contemporary Canada” will analyze and discuss the complexity of the current debate within Canada around two key themes resources and territories. These entities, objects of top-down policies of development and exploitation, which are the legacies of the colonial past, have become, once again, contested sites around which activism and scholarly activity have coalesced. We also hope the conference will help us “reset the North American” by focusing on how Canadian scholars are generating new frameworks through which to study land, resources, and territory.

10:15am – Observations from Princeton: A Few Notes About “Apologies to the Iroquois” by Edmund Wilson
Fabrizio Gallanti, Distinguished Mellon Fellow in Architecture, Urbanism, and the Humanities, 2014-15, Lecturer, McGill University School of Architecture

2:45pm – What Would a Decolonial City Be Like? Speculations on Indigenous Sovereignty, Resurgence, and Indigenist Urbanism
Heather Dorries, School of Public Policy & Administration, Carleton University
Discussant: Rob Nixon, Currie C. and Thomas A. Barron Family Professor in the Humanities and the Environment