Aldo Rossi: The Architecture and Art of the Analogous City 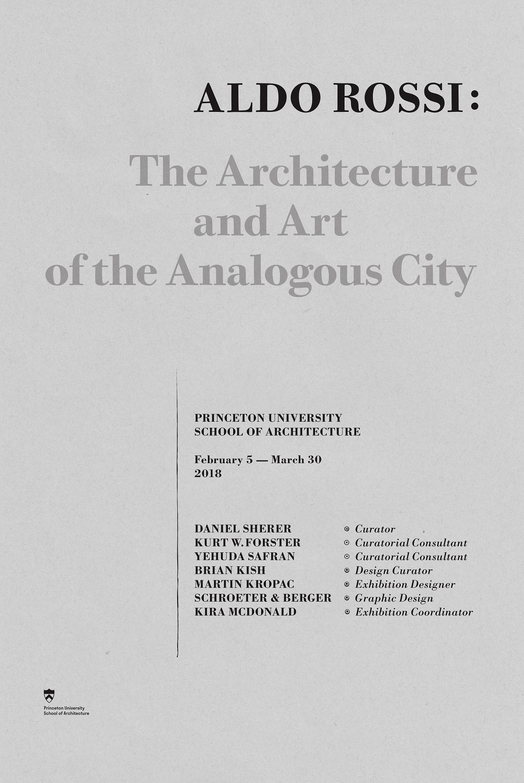 This Princeton University Exhibition, curated by Daniel Sherer — the second retrospective of Aldo Rossi (1931-1997) in the United States since 1979 — offers a new assessment of his multifaceted achievements as architect, designer, and theorist of architecture and the city. “Aldo Rossi: The Architecture and Art of the Analogous City” will be on view at the Princeton University School of Architecture from February 5 through March 30, 2018.

Highlighting the role analogy played in Rossi’s approach, the exhibition examines domains that are connected by this concept and the wide variety of media (drawing, painting, collage, engraving, and models) they presuppose. Revealing new dimensions of mediation between art and architecture, the show features a number of original works by Rossi, encompassing drawings and other mixed media images that have never been exhibited before, in concert with design objects, archival documents, period photographs, films, and interviews. The aim is to shed new light on the elusive and complex figure who redefined the discipline in the 1970s, 1980s, and beyond.

The show presents different phases of Rossi’s career chronologically and thematically, with an emphasis on the period from 1967 to 1990. The chronological part unfolds through a detailed presentation of his architectural projects in the School of Architecture’s North Gallery, highlighting well-known works such as Gallaratese (1967-74), the Modena Cemetery (1971-1984), and the Teatro del Mondo (1980) alongside lesser known projects such as the Villa in Borgo Ticino (1973) and the Casa dello Studente in Chieti (1977). The thematic areas of the exhibition center on Rossi's relation to other protagonists of theory and practice, critical responses to his work as they unfold over time, and their institutional and cultural contexts. Taken together, these foci can help the viewer trace key moments in Rossi’s architectural production and important instances of its reception both in Italy and internationally, culminating with the Pritzker Prize in 1990.

Renewed attention to the works showcased in the exhibition casts an unexpected light on the architectural present and its roots in theory and practice from the late sixties to the eighties. A glance at Rossi now opens new doors to a radical critique of this era by stressing the deep temporality of architectural type, the principle of analogy linking built form to the world of objects at different scales, and unique perceptions of space that only architecture can offer.

Thanks are due to SoA Dean Monica Ponce de Leon, to the Fondazione Aldo Rossi for their generous endorsement of the show and to Elise Jaffe and Jeffrey Brown for their generous support. The curator would like to extend a special thanks to Alberto Alessi, Franklin Boue, Gianni Braghieri, Peter Eisenman, Massimo Fortis, Frank Gerard Godlewski, Steven Holl, Jonathan Kirschenfeld, Alvaro Siza, Robert A. M. Stern, Claudia Tinazzi, Carlo Valsecchi, and Laurie Zazenski for their support.