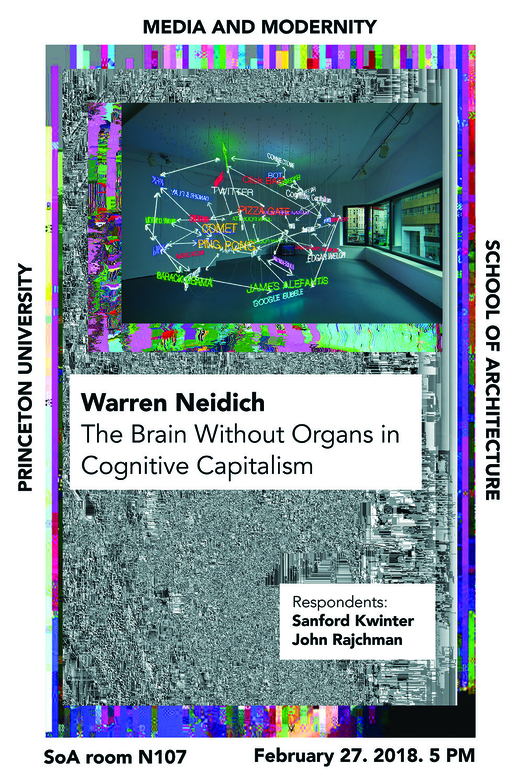 The architectural community long has resisted incorporating the knowledge of neuroscience into its repertoire of creative apparatuses and methods, fearing its message might be reductive and deterministic. However, the advent and acceleration of technologies interfacing with the brain, so called Neural Capitalism, e.g. Google DeepMind, brain-computer interfaces, neural dust, cortical implants, and optogenetics and their linkage to the Internet of Everything and Virtual reality platforms provide an occasion to pause to reevaluate the future of architecture's role in this complex system. This is especially true given the capacity of the social,  cultural and technological environment to generate the epigenetic pressures that sculpt the brain’s neural plasticity. Employing ideas and methods linking the concept of post-Workerism (via Deleuze and Guattari’s notion of the “Body without Organs”) to neuroscience, this lecture will elaborate how my related concept of “the Brain without Organs” might illustrate a means of resistance in our age of Cognitive Capitalism, in which the brain and the mind are the new factories of the 21st century. I am calling for a brain that is open, noisy, empathic, and community-oriented, not an optimized one that can work longer and more efficiently in front of a computer screen in an office bureau coordinating stock transfers or drone strikes.

Warren Neidich is an internationally recognized artist and theorist. He is Professor of Art, Weissensee Kunsthochschule, Berlin, founding director of the Saas-Fee Summer Institute of Art, Berlin, American Editor Archive Books and Visiting Scholar at Otis College of Art and Design. He has exhibited at such institutions as the Whitney Museum of American Art, PS1, MOMA, The Walker Art Center, MIT List Center of Art, Ludwig Museum, Cologne, ICA, London, and Los Angeles County Museum of Art. He has recently published Neuromacht, Merve Verlag, Berlin and The Psychopathologies of Cognitive Capitalism, Part 3. His Color of Politics published by Bom Dia Books, Berlin and the Kunstverein Rosa-Luxemburg-Platz is forthcoming in 2018. Dr. Neidich studied photography, neuroscience, medicine, ophthalmology and architectural theory.

Sanford Kwinter is a Canadian architectural theorist, writer, and editor. He is a professor of architecture at The European Graduate School / EGS, at The School of Architecture at Pratt Institute, New York, and at the University of Applied Arts in Vienna, where he heads the Institute for Theory and History of Architecture.

John Rajchman is a philosopher and a professor of art history, Columbia University. He has written extensively on theory, art, and architecture. A former editor of October, a founding editor of Semiotexte, he was on the advisory board for the ANY architectural conferences and publications in the 90s and is currently a contributing editor at ArtForum. He has recently published an anthology of French Philosophy since 1945, co-edited with Etienne Balibar, and for a number of years has been involved in 'global' critical or curatorial projects.