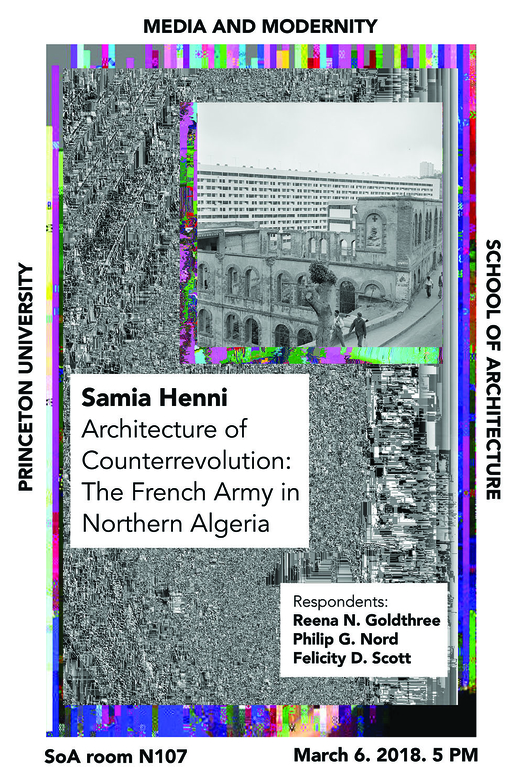 This panel discusses Architecture of Counterrevolution: The French Army in Northern Algeria, recently published by gta Verlag (October 2017). The book examines the roots and effects of French spatial colonial policies and military counterinsurgency operations in Algeria during the Algerian Revolution (1954–1962). During this bloody and protracted armed conflict, the French civil and military authorities designed and completed not only tactical destructions, but also new constructions in order to allow for the strict control of the Algerian population and the protection of the European communities of Algeria. This study focuses on three interrelated spatial counterrevolutionary measures: the massive forced resettlement of Algerian farmers; the mass-housing programs designed for the Algerian population as part of General Charles de Gaulle’s Plan de Constantine; and the fortified administrative new town planned for the protection of the French authorities during the last months of the Algerian Revolution. The aim is to depict the modus operandi of these settlements, their roots, developments, scopes, actors, protocols, impacts, and design mechanisms.

Reena N. Goldthree is Assistant Professor at the Department of African American Studies, Princeton University. Her research and teaching focus on social movements; political theory; labor and migration; and Caribbean feminisms. Her current book project, Democracy Shall be no Empty Romance: War and the Politics of Empire in the Greater Caribbean, examines how the crisis of World War I transformed Afro-Caribbeans’ understanding of, and engagements with, the British Empire.

Samia Henni is Lecturer of History and Theory of Architecture at the School of Architecture, Princeton University. Her research focuses on the intersection of architecture, planning, colonial practices, and military operations from the early 19th century up to the present days. She is the author of Architecture of Counterrevolution: The French Army in Northern Algeria (gta Verlag, 2017) and the curator of Discreet Violence: Architecture and the French War in Algeria, gta Institute, ETH Zurich; Het Nieuwe Instituut, Rotterdam; and Archive Kabinett, Berlin.

Philip G. Nord is Rosengarten Professor of Modern and Contemporary History, Princeton University. He studies the political and cultural history of modern France. He is the author of Paris Shopkeepers and the Politics of Resentment (1986), The Republican Moment: Struggles for Democracy in Nineteenth-Century France (1995), Impressionists and Politics: Art and Democracy in the Nineteenth Century (2000). He is also the co-editor with Nancy Bermeo of Civil Society before Democracy: Lessons from Nineteenth-Century Europe (2000), France’s New Deal: From the Thirties to the Postwar Era (2010). He is affiliated with the French department and the European Politics and Society Program.

Felicity D. Scott is Associate Professor of Architecture, Director of the Ph.D. program in Architecture (History and Theory), and Co-director of the Critical, Curatorial and Conceptual Practices in Architecture (CCCP) program at Columbia GSAPP. She is the author of Architecture or Techno-Utopia: Politics After Modernism (MIT Press, 2007), Living Archive 7: Ant Farm (ACTAR, 2008), Disorientation: Bernard Rudofsky in the Empire of Signs (Sternberg Press, 2016), and Outlaw Territories: Environments of Insecurity/Architectures of Counter-Insurgency (Zone Books, 2016).