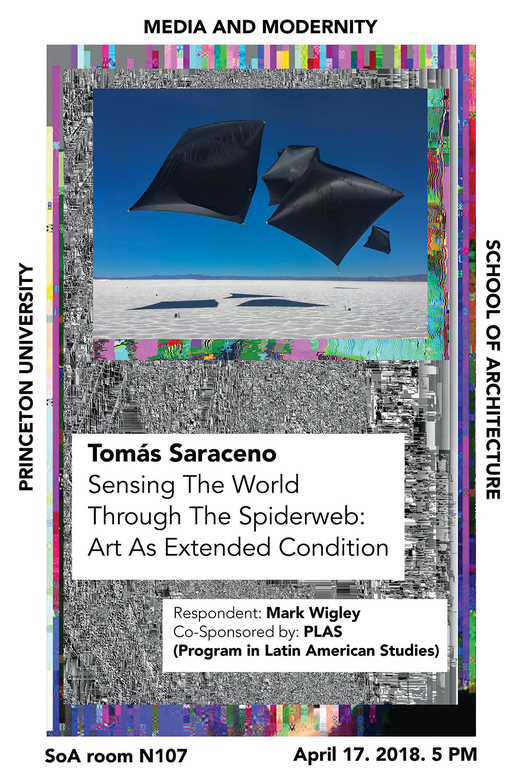 The talk will articulate with the idea of extended cognition and embodied cognition as two possible paradigms to think about how artistic practice, scientific research and different umwelten could meet.

Through the working analogy of the spider web as a structure that allows the spider to understand and interact with its surrounding, Saraceno will draw a parallel on his studio and research practice as a methodology that seats at the crossroad of various disciplines and which he conceives as an embodied experience that allows to extend cognition toward a more-than-human dimension.

Tomás Saraceno's oeuvre could be seen as an ongoing research, influenced by the world of art, architecture, natural science and engineering; his floating sculptures and interactive installations propose and explore new, mindful ways of inhabiting and perceiving the environment. He attended the International Space Studies Program in 2009 at NASA Ames in Silicon Valley, California. The same year, Saraceno presented a major installation at the 53rd Venice Biennale, and was later awarded the prestigious Calder Prize. Saraceno’s work has been exhibited internationally in solo and group presentations such as Aerocene at Solutions COP21, Grand Palais, Paris; Arachnid Orchestra.Jam Sessions at NTU Centre for Contemporary Art Singapore; Le Bordes du Monde, at Palais de Tokyo, Paris (all 2015); In orbit at Kunstsammlung Nordrhein- Westfalen K21 in Düsseldorf (2013–ongoing) and On Space Time Foam at Hangar Bicocca in Milan (2012–13), amongst others. Since 2012, he is Visiting Artist at MIT Center for Art, Science & Technology (CAST). Saraceno’s work is included in the collections of The Museum of Modern Art, New York; SFMOMA, San Francisco; Walker Art Center, Minneapolis; Nationalgalerie, Staatliche Museen zu Berlin, Berlin; among others.

Mark Wigley is Professor of Architecture at Columbia University. The historian and theorist explores the intersection of architecture, art, philosophy, culture, and technology. His books include: Derrida’s Haunt: The Architecture of Deconstruction; White Walls, Designer Dresses: The Fashioning of Modern Architecture; Constant’s New Babylon: The Hyper-Architecture of Desire; and Buckminster Fuller Inc.: Architecture in the Age of Radio. He is the co-author of Are We Human: Notes on an Archeology of Design with Beatriz Colomina in association with their curation of the 3rd Istanbul Design Biennial. He has also curated exhibitions at the Museum of Modern Art and The Drawing Center in New York; the Witte de With and Het Nieuwe Instituut in Rotterdam, and the Canadian Centre for Architecture in Montreal. His latest book is Cutting Matta-Clark: The Anarchitecture Investigation (Lars Müller, 2018).