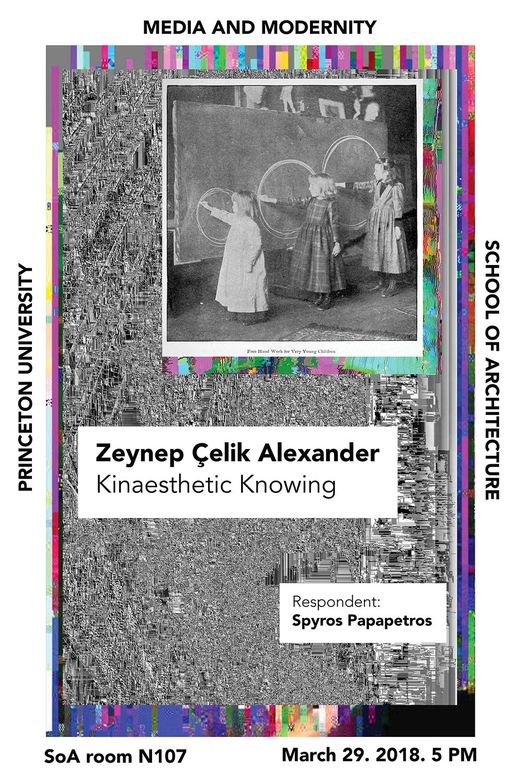 Kinaesthetic Knowing: Aesthetics, Epistemology, Modern Design (Chicago and London: University of Chicago Press, 2017) is a detailed account of what Çelik Alexander dubs ‘kinaesthetic knowing,’ a kind of reasoning, which, despite its ubiquity, has remained largely unacknowledged in histories of the Enlightenment. Using primary sources, the author makes the case that twentieth-century modernism would not have been possible without a late-nineteenth-century aesthetic discourse that privileged this alternative mode of knowing. The figures that play important roles in the book—the art historian Heinrich Wölfflin, the architect August Endell, artists and pedagogues such as Hermann Obrist, Wilhelm von Debschitz, and László Moholy-Nagy—invented new pedagogical techniques with the conviction that there existed a non-discursive, non-conceptual way of knowing that could nonetheless compete in its rigor with reasoning realized through language, concepts, or logic. The book is structured around four of these techniques: a practice of comparative looking in which the eye was assumed to draw its own conclusions independently of the mind as if sense perception had the structure of a syllogism; a method of beholding that prioritized feeling rather than thinking; a manner of drawing that abandoned the principle of imitation and gave free rein to the movements of the body; and, finally, a constellation of techniques that we have come to call designing, techniques whose goal was to manipulate form, line, color, and space.

Zeynep Çelik Alexander is an architectural historian whose work focuses on the history of architectural modernism since the Enlightenment. Alexander is the author of Kinaesthetic Knowing: Aesthetics, Epistemology, Modern Design (Chicago and London: University of Chicago Press, 2017) and the co-editor (with John May) of Architecture and Technics: A Theoretical Field Guide to Practice (forthcoming from University of Minnesota Press, 2018). She has published in journals including New German Critique, Harvard Design Magazine, Log, e-flux, Grey Room, Journal of Design History, and Centropa.  Her current research project explores architectures of bureaucracy from the Kew Herbarium to the Larkin Administration Building. Alexander is a member of Aggregate Architectural History Collaborative and an editor of the journal Grey Room.

Spyros Papapetros is Associate Professor of History and Theory at the School of Architecture and a member of the Program in Media and Modernity at Princeton University. He is the author of On the Animation of the Inorganic: Art, Architecture, and the Extension of Life (The University of Chicago Press, 2012) and co-editor of Retracing the Expanded Field. Encounters between Art and Architecture (The MIT Press, 2014).