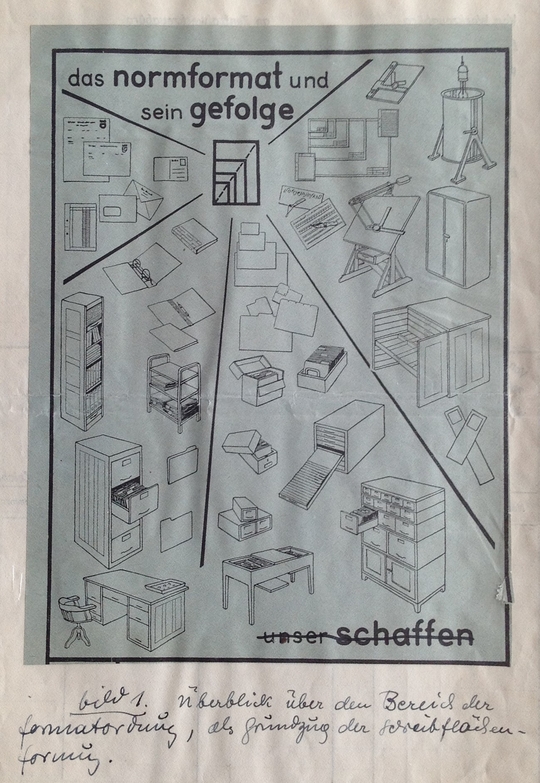 Princeton University School of Architecture
Announces the Final Public Oral Exam of Anna-Maria T. Meister
From Form to Norm: Systems and Values in German Design circa 1922, 1936, 1953

Abstract: Norm-making obsessed modern architects as much as faceless bureaucrats in Germany's public administrations throughout the 20th century. Undermining dichotomies between administrative rule and material form-giving, this dissertation poses the norm as project of design: norm-making was an act of intentional Gestaltung, and modernist Gestaltung in turn had normalizing intentions. The advent of standardized mass production exacerbated the moral charge of norms: by dimensioning the window, norm-makers framed the inhabitant's view of the world; by formatting paper, they shaped the contact between citizen and state.

As concrete tool for giving form to the environment, norm-making was an inherently modern practice, questioning assumed distinctions between an enlightened rationality of technology and re-enchanted ideology of aesthetics and morals. The DIN Institute, founded in 1917 as Fabrikationsbüro to streamline the production of weapons and munition, soon broadened its ambitions and designed thousands of norms for objects from screws to paper formats. In the 1930s and 1940s, Maria May (1900-1968) and Ernst Neufert (1900-1986), no longer prescribed "form" but aimed at total systems of normalization. In the 1950s, the founders of the Hochschule für Gestaltung in Ulm (1953-1968) and the Committee for Good Play (Verein Spielgut, 1954-), wanted to re-educate the next generation through normative "good objects." Bureaucracy was an active agent and complicit creator of architectural output, while architects administered normative objects. The norm was their shared medium—and message.

Norm-making proved to be an astonishingly resilient practice, lodged in the inherent inertia of institutions. Under the guise of technology, both norms and norm-makers remained under the radar of aesthetic critique and political scrutiny, rendering their authority largely unquestioned. Foregrounded by contested iterations of architectural modernism, this project reveals the design norm's pervasive percolation throughout the century's most radical ideological shifts: the Weimar Republic, the National-Socialist Regime, and the first decade of post-WWII reconstruction. Employing architectural operations such as divisibility (Teilbarkeit), designing life (Lebensgestaltung) and scalar relation (Maßstäblichkeit), the norm became the tool for the Gestaltung of a new modern totality—ultimately ruling the German subject.