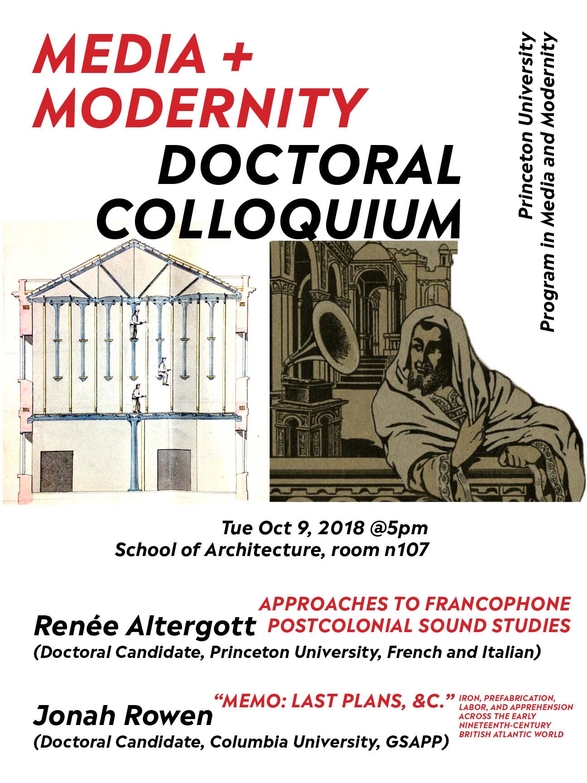 Session 1
Title: “Memo: Last Plans, &c.”: Iron, Prefabrication, Labor, and Apprehension across the Early Nineteenth-Century British Atlantic World
Presenter: Jonah Rowen (Doctoral Candidate, Columbia University, GSAPP)
With destabilizing shifts from mercantilist policies toward liberalism in early nineteenth-century imperial Britain, the technocratic-professional class put construction to use to maintain societal order. After slavery’s putative abolition in 1807 and emancipation from 1833-1838, architects and builders had to adapt their practices of communication, construction, and labor management. Technological innovations led them to design projects in England for shipping and erection in the Caribbean. To control for misinterpretation, architects elaborated drawings to a degree never necessary before.

Prefabrication deliberately obviated skilled labor. Construction assumed a unidirectional hierarchical structure, downward from the fabricator, to Clerk-of-the-Works, to coerced laborers—in the Caribbean, enslaved people or convicts. Components' interconnections were the material corollary to fulfillment of professional roles and temporal sequencing, all intricate systems for anticipating contingencies. Contrary to narratives of industrial progress, I argue that figures of apprehension more appropriately encapsulate the history of modern architecture.

Jonah Rowen is a Ph.D. candidate at the Columbia GSAPP, where he is writing a dissertation on the technics of architectural fire preemption, protection, and suppression across the British Atlantic from the late eighteenth through the nineteenth century. His research interests include histories of construction, materials, representation, and labor.

Session 2
Title: Approaches to Francophone Postcolonial Sound Studies
Presenter: Renée Altergott (Doctoral Candidate, Princeton University, French and Italian)
My thesis seeks to address a critical lacuna in scholarship on the French history of sound recording, namely the fact that the birth of sound recording in France directly coincides with the Scramble for Africa, a period of renewed colonial ambition that would eventually culminate in the Exposition Coloniale of 1931. My research investigates the earliest traces of the recording industry in the former French colonial empire, in order to demonstrate how we might bring this material history and its imperial rhetoric to bear on more abstract, sonic paradigms of thought. Conversely, focused case studies on Algeria and Martinique reveal that it is not only possible, but necessary, to rethink key concepts in postcolonial literary theory through the lens of sound studies.

Renée Altergott holds a B.A. in French and Music Composition from Northwestern University, and a Masters in French Literature from the Université de Paris Diderot (VII). Her dissertation explores the relationship between the history of sound recording and colonialism in French-language literature of the 19th and 20th centuries.