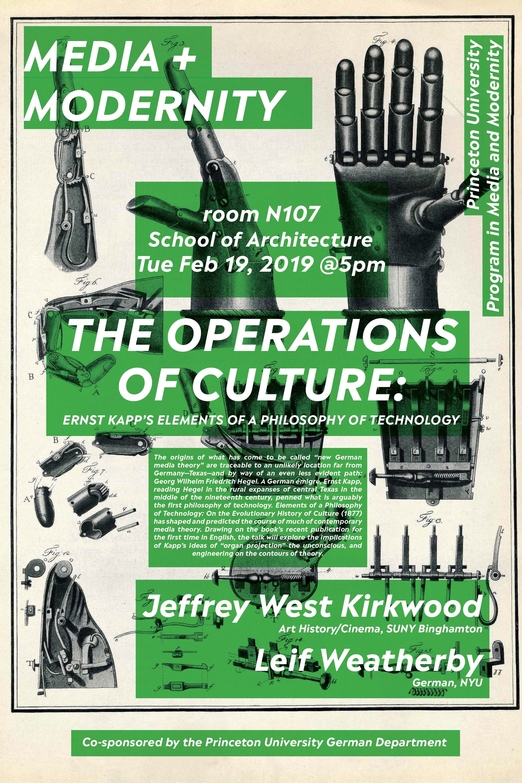 The origins of what has come to be called “new German media theory” are traceable to an unlikely location far from Germany—Texas—and by way of an even less evident path: Georg Wilhelm Friedrich Hegel. A German émigré, Ernst Kapp, reading Hegel in the rural expanses of central Texas in the middle of the nineteenth century, penned what is arguably the first philosophy of technology. Elements of a Philosophy of Technology: On the Evolutionary History of Culture (1877) has shaped and predicted the course of much of contemporary media theory. Drawing on the book’s recent publication for the first time in English, the talk will explore the implications of Kapp’s ideas of “organ projection” the unconscious, and engineering on the contours of theory.

Jeffrey West Kirkwood is Assistant Professor in the Department of Art History and the Department of Cinema at Binghamton University, State University of New York. He received his MA from the University of Chicago and his PhD from Princeton University, where he was the recipient of a a Fulbright Fellowship and a Harold W. Dodds Fellowship. In 2016-2017 he was a fellow at the International Research Institute for Cultural Technologies and Media Philosophy (IKKM) at the Bauhaus University in Weimar, Germany. He has written for October, Grey Room, Texte zur Kunst, Zeitschrift für Medien- und Kulturforschung (ZMK), Jacobin, Idiom, der Freitag, and OSMOS.

Leif Weatherby is Associate Professor of German at NYU, and the founder of the Digital Theory Lab. His research focuses on philosophies of technology - especially the digital - Romanticism and Idealism, and political economy. His book, Transplanting the Metaphysical Organ: German Romanticism between Leibniz and Marx, tracks an early techno-philosophy in the doctrine he calls "Romantic organology." His ongoing work on the relationship between cybernetics and German Idealism has been supported by the National Endowment for the Humanities and the Alexander von Humboldt association. His writing has appeared in venues like SubStance, Grey Room, and the Los Angeles Review of Books.