Media + Modernity: Erin Edwards, "Sutures and Grooves: Modernist Skull Media and the Sounding of the Human" with Respondent: Gavin Steingo 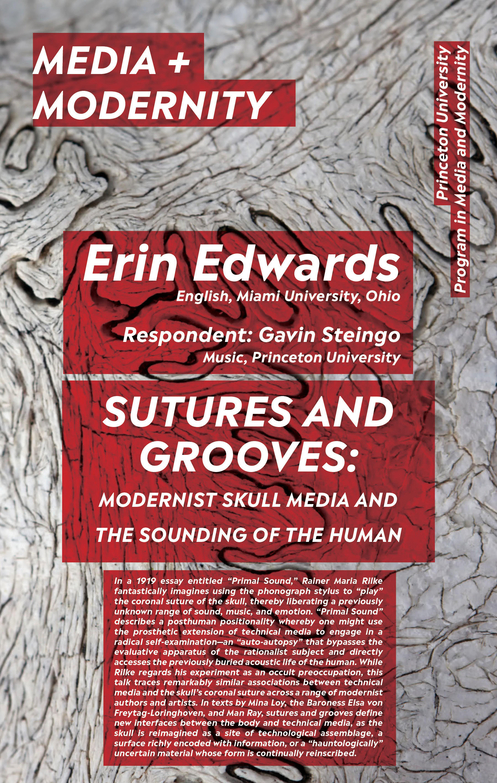 In a 1919 essay entitled “Primal Sound,” Rainer Maria Rilke fantastically imagines using the phonograph stylus to “play” the coronal suture of the skull, thereby liberating a previously unknown range of sound, music, and emotion. “Primal Sound” describes a posthuman positionality whereby one might use the prosthetic extension of technical media to engage in a radical self-examination—an “auto-autopsy” that bypasses the evaluative apparatus of the rationalist subject and directly accesses the previously buried acoustic life of the human. While Rilke regards his experiment as an occult preoccupation, this talk traces remarkably similar associations between technical media and the skull’s coronal suture across a range of modernist authors and artists. In texts by Mina Loy, the Baroness Elsa von Freytag-Loringhoven, and Man Ray, sutures and grooves define new interfaces between the body and technical media, as the skull is reimagined as a site of technological assemblage, a surface richly encoded with information, or a “hauntologically” uncertain material whose form is continually reinscribed. Far from signifying the mortal limits of the human, the skull is involved in more general vivifications of matter: Rilke imagines that the stylus could by lifted from the coronal groove and placed upon any natural line or contour, thus playing and animating what has previously been a kind of silent and dead world. As these modernist texts suggest, however, “skull media” also provide a way to amplify already dominant and hierarchical forms of humanism, entailing a trenchant reexamination of who—and what—counts as alive, and as human, in the early twentieth century.

Erin E. Edwards is Associate Professor of English at Miami University, Ohio, and the author of The Modernist Corpse: Posthumanism and the Posthumous (University of Minnesota Press, 2018). Her research explores the intersections among modernism, posthumanism, death studies, ecocriticism, and technical media. She is currently working on a second book project that explores the possible futures of death in speculative fiction, visual art, digital culture, and contemporary alternative death movements.

Gavin Steingo is Assistant Professor of Music at Princeton University. He is the author of Kwaito’s Promise: Music and the Aesthetics of Freedom in South Africa (University of Chicago Press, 2016), which was awarded the Alan P. Merriam prize by the Society for Ethnomusicology. Steingo recently co-edited the volume Remapping Sound Studies (Duke University Press, 2019), and with Jairo Moreno he edits the book series “Critical Conjunctures in Music and Sound” for Oxford University Press. He is currently at work on two monographs: a study of attempts at human communication with others beings, and an examination of the “involuntary” in music performance contexts.