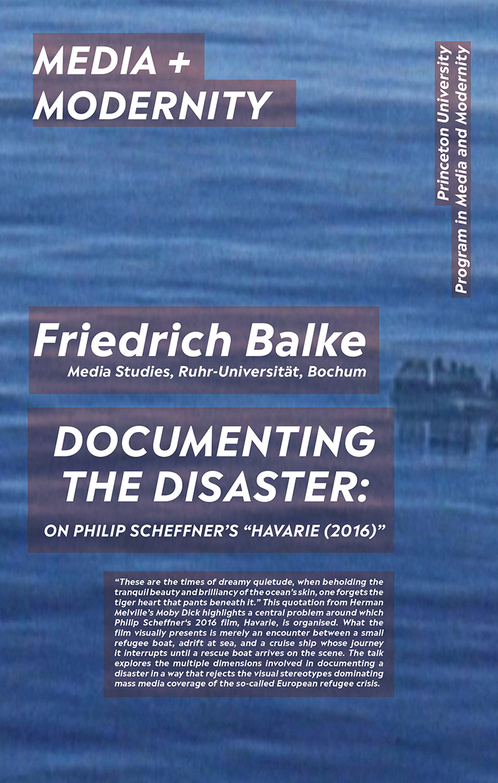 “These are the times of dreamy quietude, when beholding the tranquil beauty and brilliancy of the ocean’s skin, one forgets the tiger heart that pants beneath it.” This quotation from Herman Melville’s Moby Dick highlights a central problem around which Philip Scheffner‘s 2016 film, Havarie, is organised. What the film visually presents is merely an encounter between a small refugee boat, adrift at sea, and a cruise ship whose journey it interrupts until a rescue boat arrives on the scene. The talk explores the multiple dimensions involved in documenting a disaster in a way that rejects the visual stereotypes dominating mass media coverage of the so-called European refugee crisis.

Friedrich Balke is Professor for Media Studies at the Ruhr-Universität Bochum, Germany, where he is the director of the graduate research group “Das Dokumentarische. Exzess und Entzug” (The Documentary: Excess and Withdrawal). The research group analyzes the different media forms of documentary practice as well as the media-related, artistic, and literary caesura within the history of documentary practice since the invention of photography. Balke is also the deputy director of the international research group “Medien und Mimesis” (Media and Mimesis).Before his time in Bochum he was Professor of the History and Theory of Artificial Worlds at the Bauhaus-Universität Weimar and held positions at the Universities of Konstanz, Siegen, Cologne, and at Columbia University.

Program in Media and Modernity