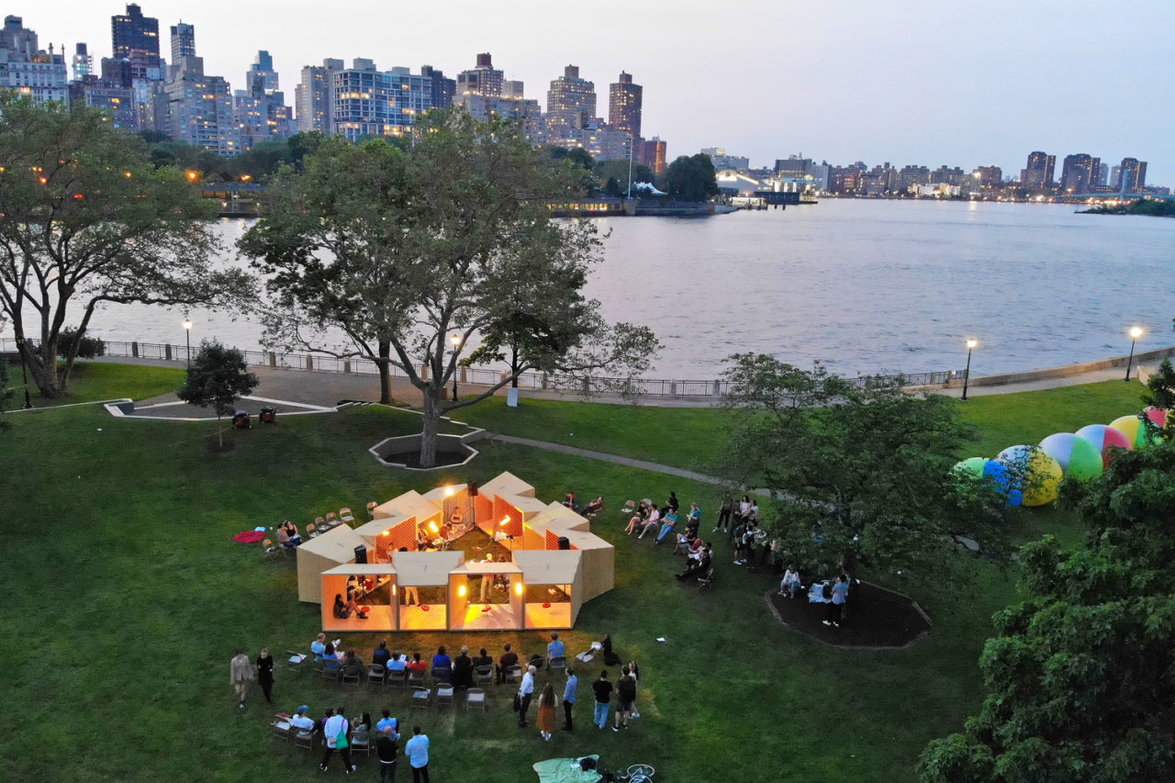 The 2019 City of Dreams Pavilion is now open to the public in Lighthouse Park on Roosevelt Island! Unveiled during the FIGMENT festival earlier this month, this year’s structure is titled Salvage Swings and designed by Somewhere Studio, led by Charles Sharpless, AIA, and Jessica Colangelo. This temporary structure is now open to the public through August 2019 (see directions here).

Somewhere Studio worked with FIGMENT, ENYA, SEAoNY, the Fay Jones School of Architecture and Design, and the Roosevelt Island Operating Corporation to select the exact site for Salvage Swings, refine the design, obtain necessary approvals, and fabricate and install the pavilion on the island.

Thanks in part to volunteers from AIANY’s Emerging New York Architects (ENYA), the pavilion’s construction began May 21 by volunteers staking the site and laying foundations, followed by assembly of the cross-laminated timber (CLT) panel modules later in the week.

Salvage Swings utilizes scrap CLT panels salvaged from an ongoing construction project at the University of Arkansas to create a fun and inviting summer pavilion. The pavilion comprises 12 swing modules that frame the swinger and the swinger’s view. The modules, which are held together with an oversized finger joint, are identical in size but made unique through a playful patterning of painted hatches and windows. The cut-out CLT shapes that were removed to create windows are even reused to make the swing seats. Somewhere Studio collaborated with Guy Nordenson and Associates for structural engineering and TM Light for lighting design.

At Roosevelt Island, the modules are organized in a triangular form, enabling community swinging while creating covered seating areas and an interrupted visual field that allows for hide-and-seek games. The generous central space created by the 12 structures can also host community events. At summer’s end, the individual swing modules will be relocated to parks and schools across New York City.

The annual City of Dreams competition is hosted by FIGMENT, the AIANY Emerging New York Architects Committee (ENYA), and the Structural Engineers Association of New York (SEAoNY). The City of Dreams Pavilion, so named for its focus on the future of a world that faces strains on both economic and natural resources, aims to promote sustainability-oriented thinking amidst the architecture and design communities, requiring designers to consider the environmental impact of their designs from materials sourcing to disposal (or ideally reuse) of waste at the end of the season.