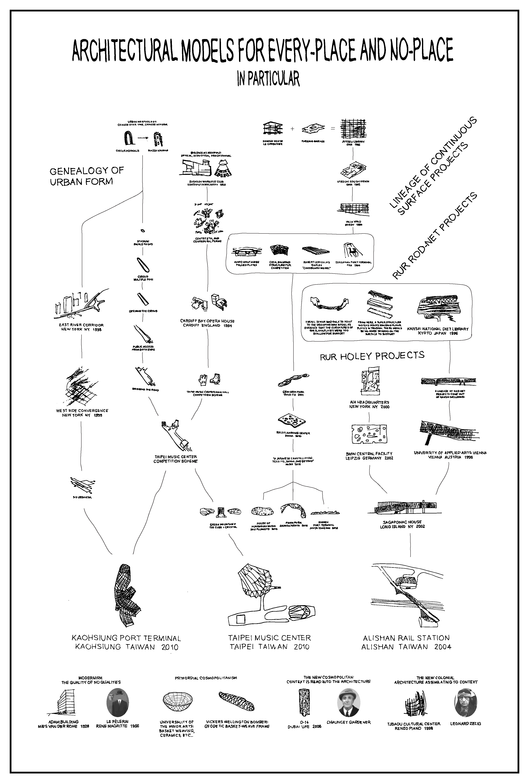 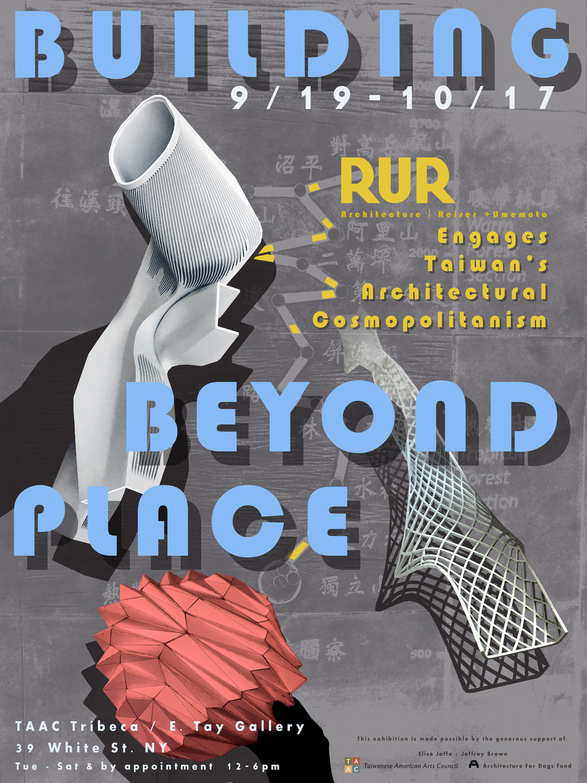 Professor Jesse Reiser's firm Reiser+Umemoto, RUR Architecture has an exhibition through October 17th, 2019 with an Opening Reception on Thursday, September 19th at 6pm.

Building Beyond Place: RUR Engages Taiwan’s Architectural Cosmopolitanism, presents three projects by New York based Reiser + Umemoto, RUR Architecture, each embodying a unique urban condition and providing a vital model for a post-industrial Taiwan. In Alishan Mountain, a former logging railway, spanning 86 kilometers and rising through three climactic zones, is harnessed environmentally as an intermodal corridor of tourist infrastructure and landmarks, supplying a series of specialty restaurants and a microeconomy of taste tourism. In Kaohsiung, a port terminal and tower, scheduled for completion in 2020, utilizes a three-dimensional urban strategy to hold industrial, service, and public functions in close yet discrete proximity along the city’s waterfront. In Taipei, the Taipei Music Center, scheduled for completion in 2020, grants the Taiwanese music industry a new urban precinct while enmeshing itself within its immediate urban and natural surroundings.

Over the past 20 years, as Taiwan has transformed from an industrial to a post-industrial society, its governmental, cultural, and design communities—already enmeshed in the transnational design network—initiated a far-sighted cosmopolitan project in the form of competitions, systematically looking at specific architects and design ideas within and outside of Taiwan. Towards this end, we have seized the opportunity to radically reconsider architecture in relation to a unique history of industry, urbanism, and an astonishing natural beauty. Although each project confronts a specific local condition—a linear cut through a forest, a jagged, polluted waterfront edge, and an industrial island between mountains—they collectively assert that Taiwan’s specific history and geography, its heritage, is its key to resisting the homogeneity and placelessness that has overtaken nearby post-industrial nations. Specifically, the combination of a brutal, extraction-based colonial legacy and raw post-colonial urbanism within Taiwan’s extensive tropical forest has allowed us to stage an oftentimes breathtaking encounter between new architecture and nature.

Reiser + Umemoto, RUR Architecture DPC, is a multidisciplinary design firm operating at a wide range of scales: from furniture design, to residential and commercial structures, up to the scale of landscape, urban design, and infrastructure. In 2010, the firm was awarded first prize for the Taipei Pop Music Center and the Kaohsiung Port Terminal in Taiwan, both of which began construction in 2013 are set to be completed in 2020. Jesse Reiser and Nanako Umemoto have received numerous awards for their speculative work and built projects, including the Chrysler Award for Excellence in Design, the Academy Award in Architecture by the American Academy of Arts and Letters, the Presidential Citation and John Hejduk Award from the Cooper Union, and the USA Booth Fellowship from United States Artists for Architecture & Design. The firm’s first comprehensive monograph, Projects and Their Consequences, was published in 2019 and traces 30 years of innovative, multidisciplinary investigations of form, structure, technique, and planning.

This exhibition was made possbile through the generous support of Elise Jaffe + Jeffrey Brown and the Architecture for Dogs Fund.