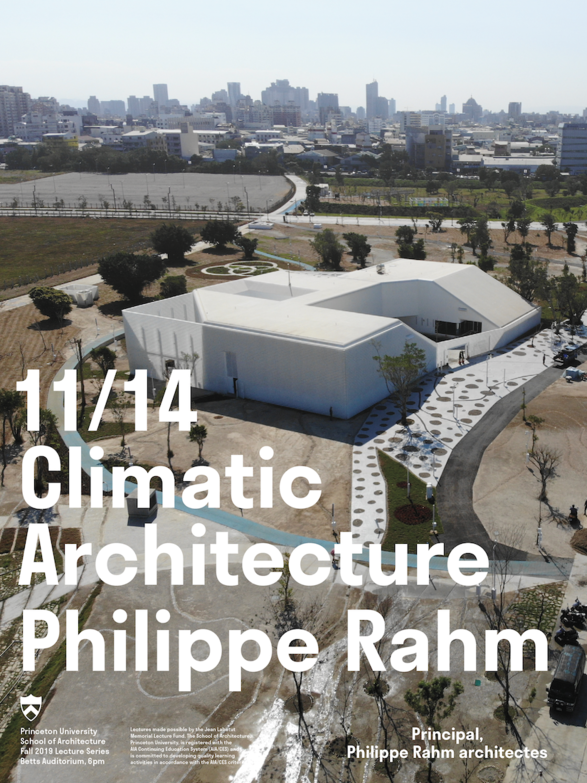 Philippe Rahm is a Swiss architect and principal in the office of Philippe Rahm architectes, based in Paris, France. His work, which extends the field of architecture from the physiological to the meteorological, has received an international audience in the context of sustainability.

Rahm has held professorships at Harvard GSD, Columbia, and Princeton—where he held the Jean Labatut Professorship from 2010 to 2012. He has lectured widely, including at Yale, Cooper Union, UCLA and the ETH Zürich.

His recent work includes the 70-hectare Central Park in Taichung, Taiwan, completed in October 2018; the ongoing project for the Agora of the French National Radio in Paris; and a 2,700-square-meter architecture exhibition for the Luma Foundation in Arles, France, in 2016. He has participated in a number of exhibitions worldwide including Archilab, Orléans, France 2000; SF-MoMA 2001; CCA Kitakyushu 2004; Centre Pompidou, Paris, 2003-2006 and 2007; Manifesta 7, 2008; Louisiana museum, Denmark, 2009; and Guggenheim Museum, New-York 2010. In 2007, he had a personal exhibition at the Canadian Centre for Architecture in Montreal. His work was also exhibited in 2017 at the Chicago and Seoul Architecture biennales.

Photos of this and other Fall 2019 events can be found on our Princeton SoA Flickr: https://www.flickr.com/photos/princetonsoa/albums

The lecture recording will be available on our Vimeo account following the event: https://vimeo.com/princetonsoa