Please join us on Tuesday, April 9, 2013, 5pm in Room N107 at the Princeton School of Architecture for this year's second M+M Doctoral Colloquium with Adedoyin Teriba and Federica Vannucchi:

"My dissertation studies how the architecture of Afro-Brazilian migrants (Aguda) in Southwest Nigeria particularly between 1880 and 1960 embodied their idealization of themselves and their agenda to affect the aesthetic tastes, social mores and public religious expressions of Lagosians and inhabitants of Southwest Nigeria. This project seeks to reconstruct a history of the migrants’ interpretation of the architecture they saw in Brazil, and an exploration of the social meanings it conveyed in subsequent generations."

Adedoyin Teriba is a PhD candidate of Architectural History at Princeton University. His dissertation explores how architecture, tombstones and objects of certain Afro-Brazilians in Brazil and the Bight of Benin helped to refashion their identities and narratives of their sojourn on both sides of the Atlantic. His other interests include Architecture in Sub-Saharan Africa, psychology of perception in art and architecture and art & architectural historiography. Originally trained as an architect, he has worked in firms in New York and New Jersey.

Federica Vannucchi
"A Manual of Resistance: The QT8 Experiment at the 8th Milan Triennale (1945-47)"
[School of Architecture, advisor: Lucia Allais]

"In May 1945, the Italian provisory government CLN (National Liberation Committee), formed by members of the Resistance, named the architect and communist activist Piero Bottoni Director of the VIII Milan Triennale. Bottoni mandated that the Milanese institution become an experimental space for translating the principles of the neo-democratic country into architecture. He organized the Triennale around the construction of an exemplary neighborhood QT8 (Experimental Quarter of the Eighth Milan Triennale, designed 1945-1947 and completed late 1950s) as if it were a manual — a guide for rethinking the architectural discipline on the verge of the new historical and political events. Comparisons with other architectural manuals of the period, such as Irenio Diotallevi and Franco Mariscotti’s Il problema sociale, costruttivo ed economico dell’abitazione (1947) or the more well-known Mario Ridolfi’s Manuale dell’Architetto (1946), clarify how Bottoni intended to realize an instrument of intellectual control, but remain within the parameters of the Resistance as a political project."

Federica Vannucchi is a PhD Candidate in Architecture at Princeton University. She graduated at the Università degli Studi di Firenze and earned a MED at Yale School of Architecture. She has taught at Pratt, Parsons, and Yale School of Architecture. In 2012 she received the Fellowship of Woodrow Wilson Scholars for developing her research entitled “From Control to Discipline: Design and Power at the Milan Triennale, 1945–1973.”

For an overview of the Doctoral Colloquium presentations of past years, please consult the M+M Program website here.
Keep updated on future events at: facebook.com/MediaModernity. 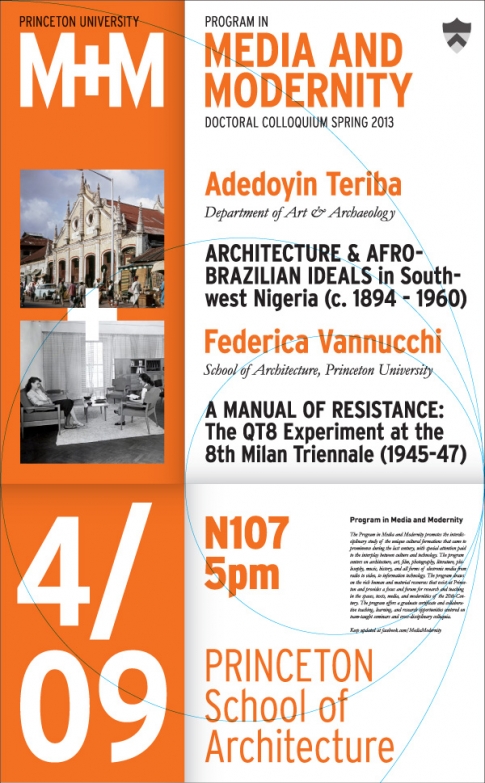