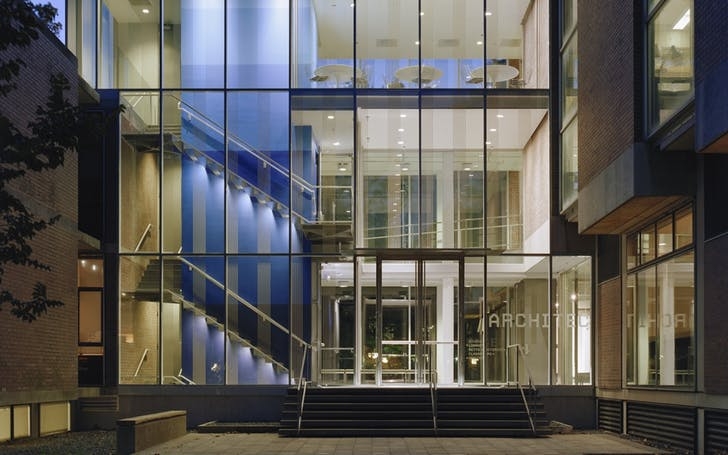 The following interview is originally published on Archinect.

As schools of architecture around the country continue to focus on how they can make architecture more diverse and equitable, Princeton University School of Architecture Dean Mónica Ponce de León is on a mission to rethink the nature of architectural licensure as it exists in the United States.

Following the dean's recent statement in support of radically rethinking licensure, Archinect recently connected with Ponce de León to discuss the significant barriers to access created by licensure as currently designed, her efforts to bring diversity to the faculty and student populations at Princeton School of Architecture, and how licensure might change moving forward.

In a statement responding to the most recent set of Black Lives Matter protests, you wrote that “the system of licensure that has defined the architecture profession needs to be eliminated or radically transformed.” Do you support efforts to include professional licensure as a part of receiving an M.Arch education or do you envision a more fundamental transformation? Should licensing be gotten rid of entirely?

We need to be honest. The profession is predominantly white and male. Only 2% of all architects are Black American. In 2008, that number was 1.5%. Let’s do the math, at that rate it will take 240 years for the profession to look like the rest of America. I, for one, cannot wait that long. If you focus on Black women, the picture is more dire. Black women comprise just under 0.3% of all architects. In 2008, that number was 0.2%. This is unacceptable.

I point to 2008 because back then, many of us thought everything was about to change. The prior year, Marshall Purnell had become the first Black American AIA president. MIT and Harvard both did conferences on race and architecture. The AIA did its first Diversity Plenary session. But as it turns out, 12 years later, little has changed.

I know that this is a sensitive subject. I am a licensed architect. I belong to that rare 1% of licensed architects who are Latinx. I am first to go to college in my family and my family was very proud of me when I became licensed. I worked hard to get my license and licensure has been empowering for me. Many think of licensure as the great equalizer. An example I hear often is that after graduation, Norma Merrick Sklarek applied to 19 firms and, facing discrimination, she got rejected by all of them. She ended up working for the City of New York department of Public Works for four years, took the exam, and passed it on the first try, becoming the first Black woman architect licensed in the state of New York. It was only then, that SOM hired her. That was 1955.

Today, we need to confront the reality that the face of the profession has hardly changed. It is predominately white, and predominantly male.

Licensure is empowering; but who does it empower? The numbers speak for themselves.

It is evident that we need a fundamental transformation.

What would an ideal transformation of the licensure system look like from your perspective? How do you envision instituting such a change both at Princeton and within the larger legal and regulatory frameworks of architectural production?

I believe that we need to eliminate practical training from the process of licensure. Practical training is an exclusionary tactic that serves nothing but to maintain the power structures within the discipline. Architecture should be more like the legal profession. After graduating from an accredited program, our students should take the ARE exam, and become licensed.

We are one of the few professions that requires both examination and experience. Think about this, in order to be a licensed architect: You need to graduate from an NAAB accredited institution. The process of NAAB accreditation is rigorous and thorough, and a whole industry revolves around it. You then need to have “practical training” working for a licensed architect. If everything goes well, that takes about three years. You also need to pass the six divisions of the ARE exam. You need to meet the additional requirements of your jurisdiction; and then, you can earn an NCARB certificate so that you can practice across borders.

Do we really need so many checks and balances? Who does this benefit?

All of this seems particularly excessive when we take into account how highly regulated the process of building is. Consider this: Architects are required to work with licensed engineers in various specialties. Building codes control every aspect of a building. Construction documents go through an extensive review for permit, and regular site inspections ensure the building is constructed according to codes and regulations.

Historically, professional licensure has effectively served to lock Black people out of professional advancement, what can be done at this point in time to reverse that legacy?

The story that we hear about architectural licensure is that it was necessary to ensure life safety. This may be true of structural engineering. but I am not sure this is true of Architecture. Calls for licensing for many professions emerged during Reconstruction and there is a great deal of scholarship about how licensing was used as a tool to discredit Black skilled labor. Architecture is no different, and within this legacy, the requirement of practical training is particularly disturbing. Apprenticeship was a key component of the Southern Black Codes.

To reverse this legacy, we need a system of licensure that acknowledges the gross inequities of the profession and is designed to remedy them. Not a licensure system that perpetuates it.

In the late 19th century the emergence of architectural education at the university was intended to replace the apprenticeship model. But in the 1920s practitioners expressed “concern” that graduates did not have enough “hands-on training,” and so began experience as a licensure requirement. There is no evidence that working for another architect for three years has made buildings any safer. However, at a fundamental level, “practical training” has ensured that those who are licensed have de facto control over who can or cannot get licensed.

A hundred years later we are still operating under the same model of control; IDP and AXP have only made it harder. With the current system Norma Merrick Sklarek would have never become licensed. Today, we need to ask what does “hands-on training” in architecture really provide that an architectural education cannot provide? What necessary knowledge does practical training verify that the ARE cannot? Who truly benefits from the system?

I believe, the numbers speak for themselves.

In 2019, the AIA, along with NCARB and other professional organizations in various industries, launched the Alliance for Responsible Professional Licensing (ARPL), “a new coalition of technical professions focused on educating policymakers and the public about the importance of rigorous professional licensing standards.” Is this the right approach?

I worry when I hear Robert Ivy, someone who I respect, say: “The best way to maintain the public’s confidence is to continue to require that architects demonstrate rigorous and ongoing education, examination, and experience. Attempts to weaken or undermine professional licensing requirements for architects not only harm our profession, but could potentially endanger public health, safety, and welfare."

How does making licensure more accessible “weaken or undermine” it? How will public health really be “endangered” by making licensing in architecture equivalent to licensure in Law? We cannot call for diversity in the profession; and then also call for making it hard to become an architect. Not only that, how can we defend a system designed so that those who are in the majority directly control who gets to be a licensed architect?

If we really care about the public’s confidence, then let us prioritize having the discipline of architecture reflect the public it serves. If the AIA is serious about including Black Americans and other groups in the profession, then the system of licensure needs to be designed to empower them. The requirement of over 5,000 hours of work for an already licensed architect, does the opposite.

When I came to Princeton in 2016 the representation of Black Americans and other groups at the school was dismal; we have done a great deal in a short period of time and there is a great deal more to be done.

Who gets to study needs to be tackled at multiple levels, including making architecture accessible to high school students. At Princeton, we developed a high school program in partnership with Trenton High School. This is a program that Milton S.F. Curry and I developed at the University of Michigan in partnership with the Detroit Public School system, where it is still running. High school students take studio five mornings a week for one semester as part of their regular high school instruction, and they receive high school course credit. It is not an after school program. It is not a summer program. It is embedded within their high school curriculum and taught by a Princeton Architecture graduate at the High School. These Trenton students have portfolios that rival the private high school programs, and this year they will be applying to undergraduate programs nation-wide. Dean Curry is developing the same program in Los Angeles. We hope to start a national consortium with these kinds of partnerships.

As I say this, I am mindful that all of this is insufficient and will continue to be insufficient until change is systemic and sustained.

In your statement you also wrote that “data drives diversity.” Can you explain what this concept means in greater detail and how Princeton SoA’s new diversity database supports this idea?

First, let me be clear: We do not need to wait for data to enact change.

I have argued for data because it makes institutions and their people accountable. For 10 years I have heard that there is “progress” in diversity. The numbers say otherwise. I do not consider the change from 1.5% to 2% any kind of progress.

Why has the AIA, NCARB, the NAAB, and even the ACSA made it so difficult to find demographic data? Why is it that when these institutions publish data, it is incomplete or hard to understand? Why have these organizations not funded serious demographic studies? We do not have information as to what truly results in any kind of systemic “progress” or what is getting in the way of that “progress.” If diversity was truly their priority, these organizations would take this on as a priority.

Our plan for the new SoA diversity database is for Princeton to push the institutions that control the information to share it, for us to track it, cross-reference it, and make it easily accessible to the public at large.