Please join us on Tuesday, April 16, 2013, 5pm in Room N107 at the Princeton School of Architecture for this year's third M+M Doctoral Colloquium with Carolina Sá-Carvalho, Frances Jacobus-Parker and Pep Avilés:

"This talk will explore Flavio de Barros' photographs of Canudos, a region in the Northeast of Brazil where, in 1893, a messianic community was founded and four years later decimated by the Republican army. I will address the temporal dimension of these images, which helped shaping the conflict as a historical event. More than just witnessing the triumph of a certain project of modernity, the photographs – many of them pictures of ruins and corpses, others, of reenactments and performances of scenes of war – bear witness to the absence or disappearance of their objects as well as to the death and survival of alternative projects of future."

Carolina Sá-Carvalho is a PhD candidate in Spanish and Portuguese Languages and Cultures. She is writing a dissertation tentatively entitled “Traces of the Unseen: Photography, Writing and Contact in Three Expeditions in the Tropics”, in which she explores the articulations between photography and writing in the accounts of travelers who sought to leave a visual material trace of disappearing communities in the dry and wet backlands of Brazil and Peru. She is particularly interested in how the advent of technologies of reproduction mediate these experiences of contact, helping to shape different concepts of time, perception and memory.

"This talk addresses Vija Celmins’s 1960s series of drawings and paintings based closely on contemporary and vintage news photos of war and violence. It explores the relationship between the hand-made mark, the photograph, and the events captured by each, arguing that Celmins’s manual mediations of found images respond metonymically to the war in Vietnam and to unrest at home. Jacobus-Parker’s dissertation, “Redescription: The Art of Vija Celmins,” treats the full trajectory of paintings, drawings, prints and painted objects made by this pivotal American artist from 1962 to the present. It focuses on how Celmins’s practice both resonates with and disrupts modernist discourses of medium-specificity, notation, and realism."

Frances Jacobus-Parker is a doctoral candidate in the Department of Art & Archaeology, where she is writing her dissertation on the American artist Vija Celmins.  Related research interests include mimesis in postwar art, aviation and the aerial view, the representation of war, and feminism and gender. Her writing has appeared in Artforum.com, The Art Newspaper, and Third Text. Since 2010, she has served as the Joan Tisch Teaching Fellow at the Whitney Museum of American Art in New York. She is also an instructor for the Princeton Prison Teaching Initiative.

"In May 1945, the Italian provisory government CLN (National Liberation Committee), formed by members of the Resistance, named the architect and communist activist Piero Bottoni Director of the VIII Milan Triennale. Bottoni mandated that the Milanese institution become an experimental space for translating the principles of the neo-democratic country into architecture. He organized the Triennale around the construction of an exemplary neighborhood QT8 (Experimental Quarter of the Eighth Milan Triennale, designed 1945-1947 and completed late 1950s) as if it were a manual — a guide for rethinking the architectural discipline on the verge of the new historical and political events. Comparisons with other architectural manuals of the period, such as Irenio Diotallevi and Franco Mariscotti’s Il problema sociale, costruttivo ed economico dell’abitazione (1947) or the more well-known Mario Ridolfi’s Manuale dell’Architetto (1946), clarify how Bottoni intended to realize an instrument of intellectual control, but remain within the parameters of the Resistance as a political project."

Pep Avilés is a historian, architect, and educator pursuing a doctoral degree at Princeton University. Based currently in NY, he is Adjunct Associate Professor at Columbia University where he teaches the introductory seminar to the Master in Advance Architecture at the Graduate School of Architecture, Planning and Preservation. Previously he taught at Princeton University, Universitat Politècnica de Catalunya, Columbia University, and Barcelona Institute of Architecture where he was appointed Head of Graduate Studies to design and coordinate the Master’s curriculum. He holds a design degree from the School of Architecture in Barcelona (E.T.S.A.B.) and a Masters in history and theory of art and architecture from the same institution. He studied in residence at the Kungliga Tekniska Högskolan in Stockholm and as Visiting Scholar at Columbia University. In addition to numerous travel awards he recently received the Collection Research Grant at the Canadian Center for Architecture in Montreal and the 2012-13 Harold W. Dodds Fellowship.

For an overview of the Doctoral Colloquium presentations of past years, please consult the M+M Program website here. 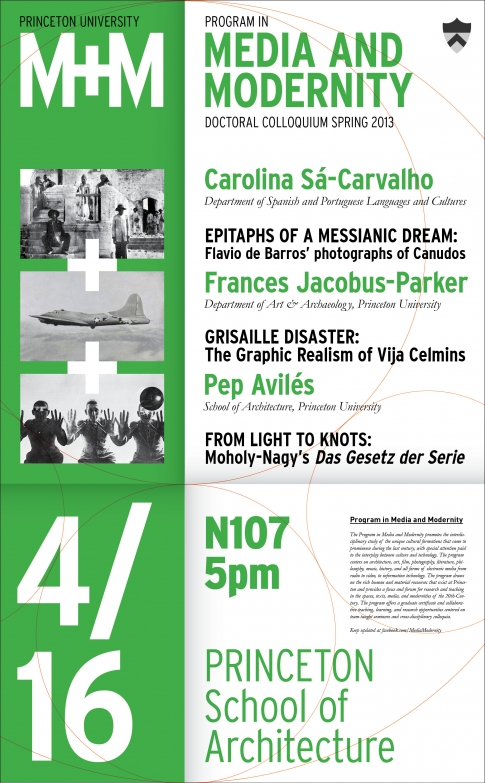