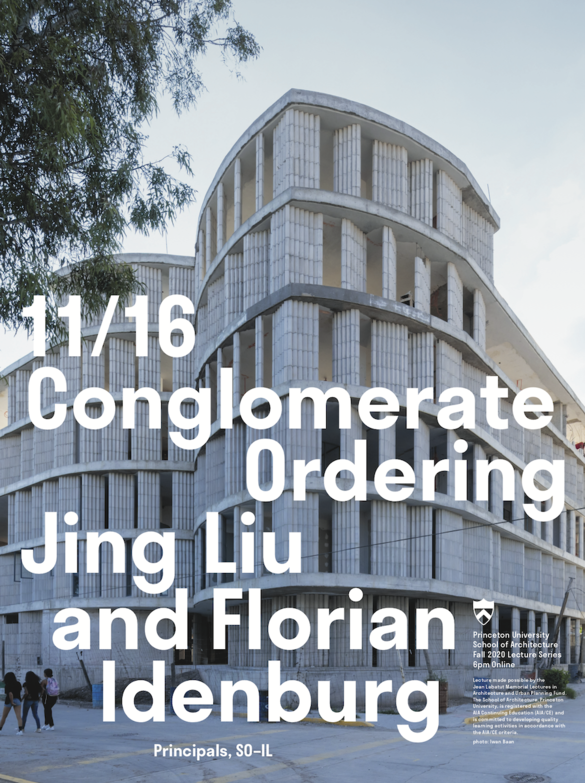 A virtual lecture from SO–IL

Jing Liu is a principal of SO–IL and has been practicing for more than 15 years working on a wide range of projects both in the US and abroad. Through building practice and interdisciplinary research projects, Liu has led SO–IL in the engagement with the socio-political issues of contemporary cities — in projects like the Artists Loft North Omaha and the Martin Luther King, Jr. Library in Cleveland. Her projects range from artistic collaborations with contemporary choreographers and visual artists to master plan and major public realm design in cities like Melbourne and Indianapolis. Liu leads all of her projects from concept to realization, and considers carefully all aspects of design and construction. She believes strongly that design should and can be accessible to all, and that architecture offers us an open platform to nurture new forms of interaction. To that end, Liu sees community engagement and collaboration across disciplines central to her role as the design lead.

Florian Idenburg, RA, AIA-IA is an internationally renowned architect with over two decades of professional experience. After learning the ropes in Amsterdam and Tokyo, he founded SO–IL in New York together with Jing Liu. His years of working in cross-cultural settings make Florian a thoughtful and collaborative partner. He has a particularly strong background in institutional spaces, leading the office on projects such as Kukje Gallery and the Manetti Shrem Museum of Art at UC Davis, as well as Amant Arts Campus in Brooklyn. His strength lies in generating imaginative ideas and transforming those into real-world spaces and objects. A frequent speaker at institutions around the world, he has taught at Harvard, MIT, Columbia, and Princeton University. His current research investigates the future of the work space and is developing a forthcoming publication on this topic, Human(s) Work (Taschen, 2020). In 2010, Idenburg received the Charlotte Köhler Prize of the Prince Bernhard Culture Fund. He is a registered architect in the Netherlands and an International Associate of the American Institute of Architects.

SO–IL was born in New York in 2008 and creates spaces and objects for future culture. Diverse in origin, their team of collaborators speaks a dozen languages and is informed by global narratives and perspectives. They are both locally-rooted and nationless, coming together as a mid-size, well-recognized company. With their ambitious private and public clients, they explore how the creation of environments and objects inspires lasting positive intellectual and societal engagement. They have completed projects in Leon, Seoul, Lisbon, and Brooklyn.

SO–IL has been featured in the New York Times, CNN, and Frankfurter Allgemeine. Their work is in the collections of the Museum of Modern Art, the Guggenheim Museum, and the Art Institute of Chicago. Their team has received numerous accolades, including the Vilcek Award, the Curbed Groundbreakers Award, and the MoMAPS1 Young Architects Program Award.