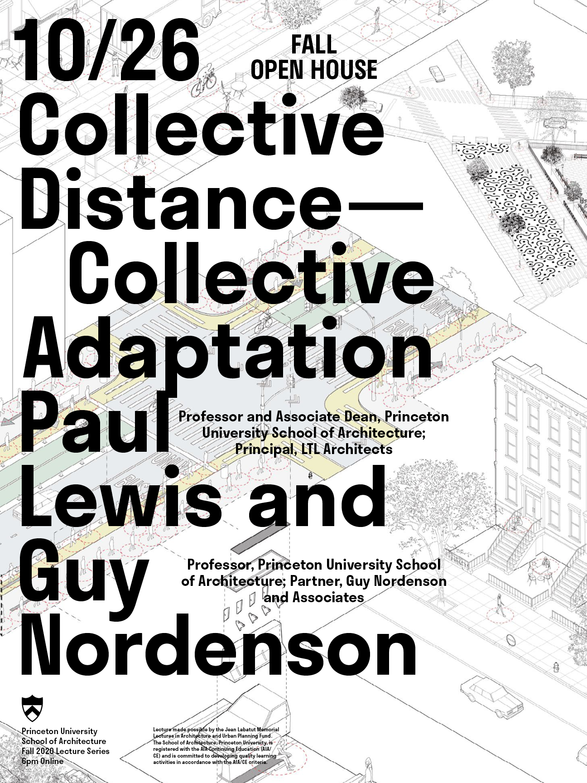 A virtual lecture from Paul Lewis and Guy Nordenson

Paul Lewis (Principal, LTL Architects) and Guy Nordenson (Partner, Guy Nordenson and Associates) are both Professors at Princeton School of Architecture and have collaborated for the past decade on coastal adaptation projects. This work has informed their approach to the integrated building studio they teach together at the School of Architecture. This summer they completed a Manual of Physical Distancing, making legible through drawings the science and spatial impacts of COVID-19.

Paul Lewis, FAIA, is a Principal at LTL Architects based in New York City. He is Professor and Associate Dean at Princeton University School of Architecture, where he has taught since 2000, and he is the President of the Architectural League and a Fellow of the American Academy in Rome. He received a BA from Wesleyan University and a M.Arch from Princeton University. His New York based firm has completed academic, cultural and institutional projects throughout the United States. LTL Architects are the 2019 NY State AIA firm of the year, who have received a National Design Award and have been inducted into the ID Hall of Fame. The firm’s recent work includes Poster House in New York, Upson Hall at Cornell, The Helen R. Walton Children’s Enrichment Center in Arkansas, and a new residence hall at Carnegie Mellon University. The firm’s designs and drawings have been exhibited around the world and are part of the permanent collections of MoMA, SFMoMA, and Carnegie Museum of Art. LTL Architects are the authors of Intensities (2013), Opportunistic Architecture (2008) and Situation Normal....Pamphlet Architecture #21 (1998). Their 2016 book Manual of Section has been translated into five languages.

Guy Nordenson is a structural engineer and Professor at Princeton University School of Architecture. Recent projects include the National Museum of African American History and Culture, the Kimbell Art Museum, and the Glassell School of Art, Menil Drawing Institute and Museum of Fine Arts expansion in Houston TX. In New York he is overseeing the installation of David Hammons’ Days End sculpture in the Hudson River and working on the Frick Museum expansion. Since 2008 he has led research projects on coastal resilience and climate adaptation and co-written three books on the subject: On the Water | Palisade Bay (2010), Structures of Coastal Resilience (2018) and Four Corridors (2019). Nordenson has co-curated exhibitions at the Museum of Modern Art including “Tall Building” (2004) and “Rising Currents” (2010). From 2006 to 2015 he was Commissioner of the NYC Public Design Commission and is currently a member of the NYC Panel on Climate Change.