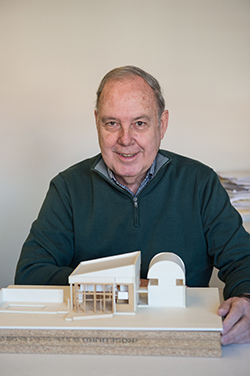 Bruce James Abbey, former dean of the Syracuse School of Architecture from 1990 to 2002, passed away on October 26, 2020, at his home in Charlottesville, Virginia, after a seven-year struggle with cancer. While serving as dean he was responsible for curriculum reform, the renovation of Slocum Hall, and guiding the school to high national rankings. Born in Burlington, Vermont, on May 18, 1943, he was educated in public schools in Burlington and spent his senior year of high school in Rome, Italy, at the Liceo Ginnasio Statale "Giuglio Cesare" as an AFS-USA (formerly the American Field Service) exchange student. In 1961 he started his studies in architecture at Cornell University, where he received a B. Arch in 1966. He completed his graduate study at Princeton University, where he received a M. Arch in 1971. He served as an architect in the Peace Corps from 1966 to 1969 in the Republic of Tunisia, first in in the Bureau of Public Works in El Kef and later in Bizerte, restoring and documenting mosques for the National Institute of Art and Archeology.

His professional office experience included working for Dan Kiley, Michael Graves, and GBQC architects. In 1974 he started an academic career at the University of Virginia, becoming Chair of the Department of Architecture and Associate Dean. In 1990 he moved to Syracuse as dean and professor, retiring from the faculty in 2016 as Emeritus Dean and Professor of Architecture in 2016. He taught architecture in Italy in Vicenza and Venice for the University of Virginia and in Florence for several years for Syracuse University as a Professor and director of the M. Arch II graduate program in Urban Design. He was a registered architect and a GSA Peer Professional. Beside maintaining a small professional architectural practice, he was a painter of watercolors, numerous drawings, and large scale murals.

He loved teaching students and was good at it. While he didn't claim to know everything, what he knew well, he shared. An architect, painter, writer, and educator, he worked hard at his craft. Travel was important, and his time as an AFS-USA foreign exchange student in Rome and later as a Peace Corps volunteer in Tunisia exposed him to new cultures and languages that he brought to his teaching.

In lieu of flowers, the family requests that donations be sent to AFS-USA (formerly the American Field Service) or The Abbey Endowment for Global Engagement at the University of Vermont, Burlington, Vermont. We can think of no better way to acknowledge how important global exposure, travel, and interaction was to Bruce's life.

A celebration of his life is being planned for October 2021 in Charlottesville, Virginia.