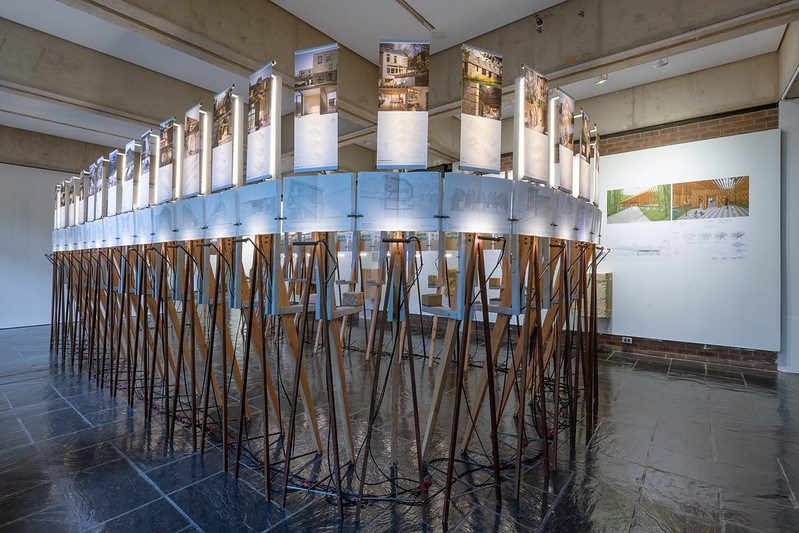 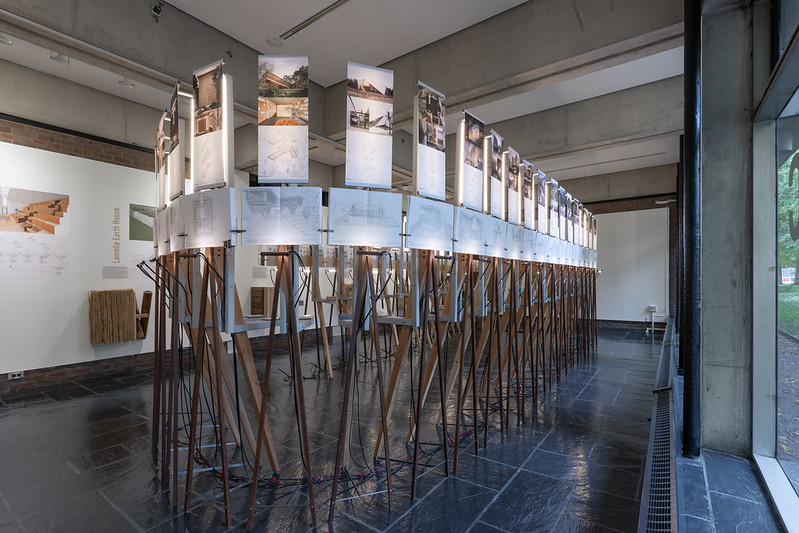 What are the material means through which architects can reduce the embodied carbon of the buildings they design? This question animates Biogenic House Sections, an installation by Lewis.Tsurumaki.Lewis (LTL) currently on view at the Princeton University School of Architecture. The setting is appropriate, as Paul Lewis, a principal at LTL, is also a professor of architectural design at Princeton.

Biogenic means “produced by living organisms.” The show focuses on natural materials and, according to press information, “examines how designing through these materials pushes architecture toward peculiar, unconventional, and logical assemblies.” Solutions that are, counterintuitively, both unconventional and logical are explored in three ways in this exhibition. 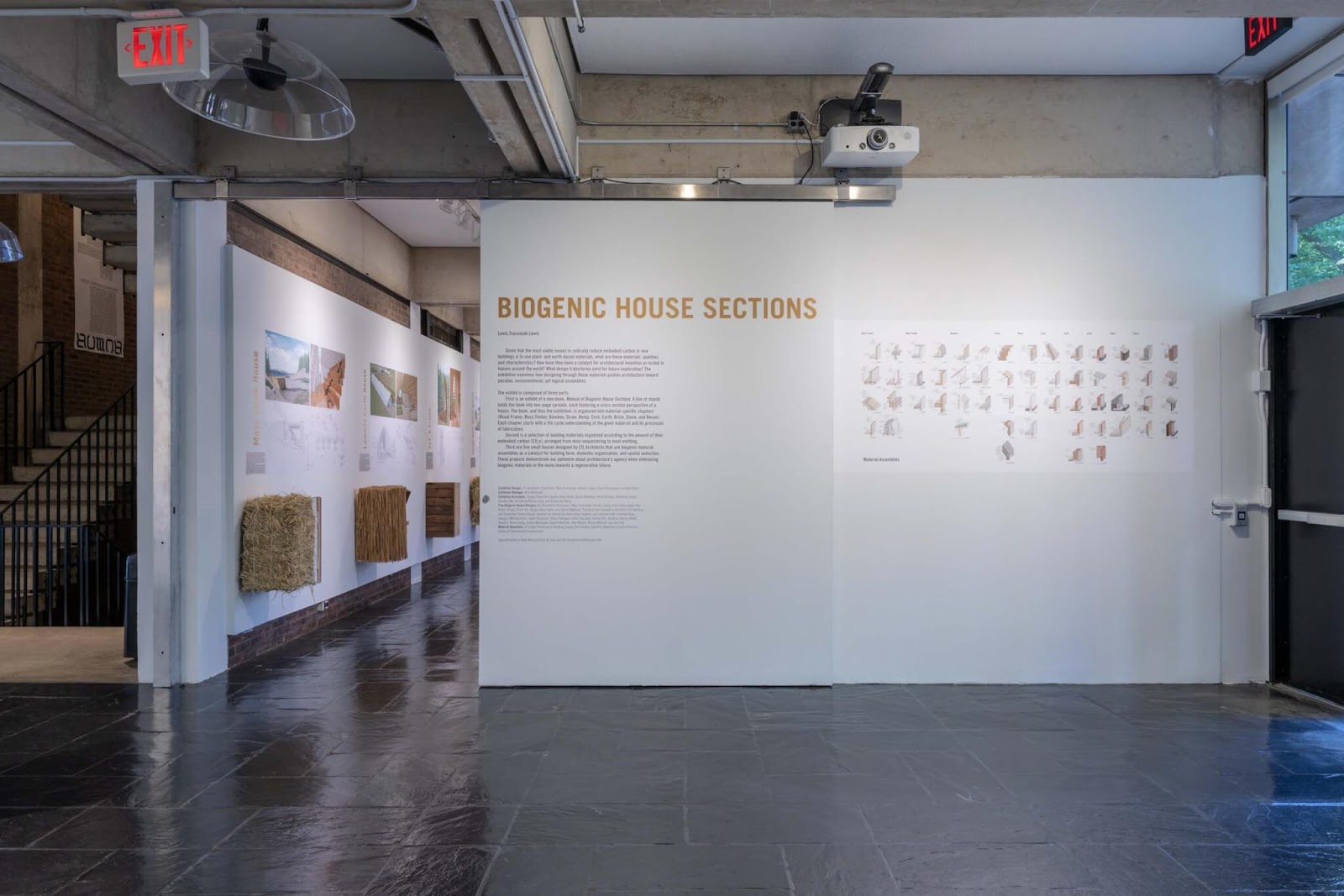 In the center of the gallery, tripod display stands, marshalled into a bean-shaped line, splay open copies of Manual of Biogenic House Sections, a new book by LTL published by ORO Editions. Small lights on bent metal rods illuminate the pages. The spreads, in sequence, showcase detailed section-perspective drawings of buildings (only homes) that demonstrate innovate use of natural components. The chapters of precedents are organized by material: wood frame, mass timber, bamboo, straw, hemp, cork, earth, brick, stone, and reuse. The references are sourced from around the world and include projects from both prominent architects (like David Adjaye) and more obscure sources. A personal favorite included in the book are the two cork-clad houses set among Spanish pines by the Barcelona-based Emiliano López Mónica Rivera Arquitectos.

Manual of Biogenic House Sections is, in spirit, a sequel to Manual of Section, published by the same authors with Princeton Architectural Press in 2016. The latter item, now widely read, included 63 drawings of buildings from the last century that showcased a variety of approaches to manipulating an architecture’s vertical interiors. When Manual of Section was published, it was exhibited in seven schools of architecture using stands designed and fabricated by LTL. These same stands were again deployed for this current exhibition, except they’ve been altered with a L-shaped wooden armature, painted gray, to expand the content transmitted to viewers. On the outer side, above the book spreads, additional project photographs and exploded axonometrics, lit from behind, deepen the understanding of the case studies. 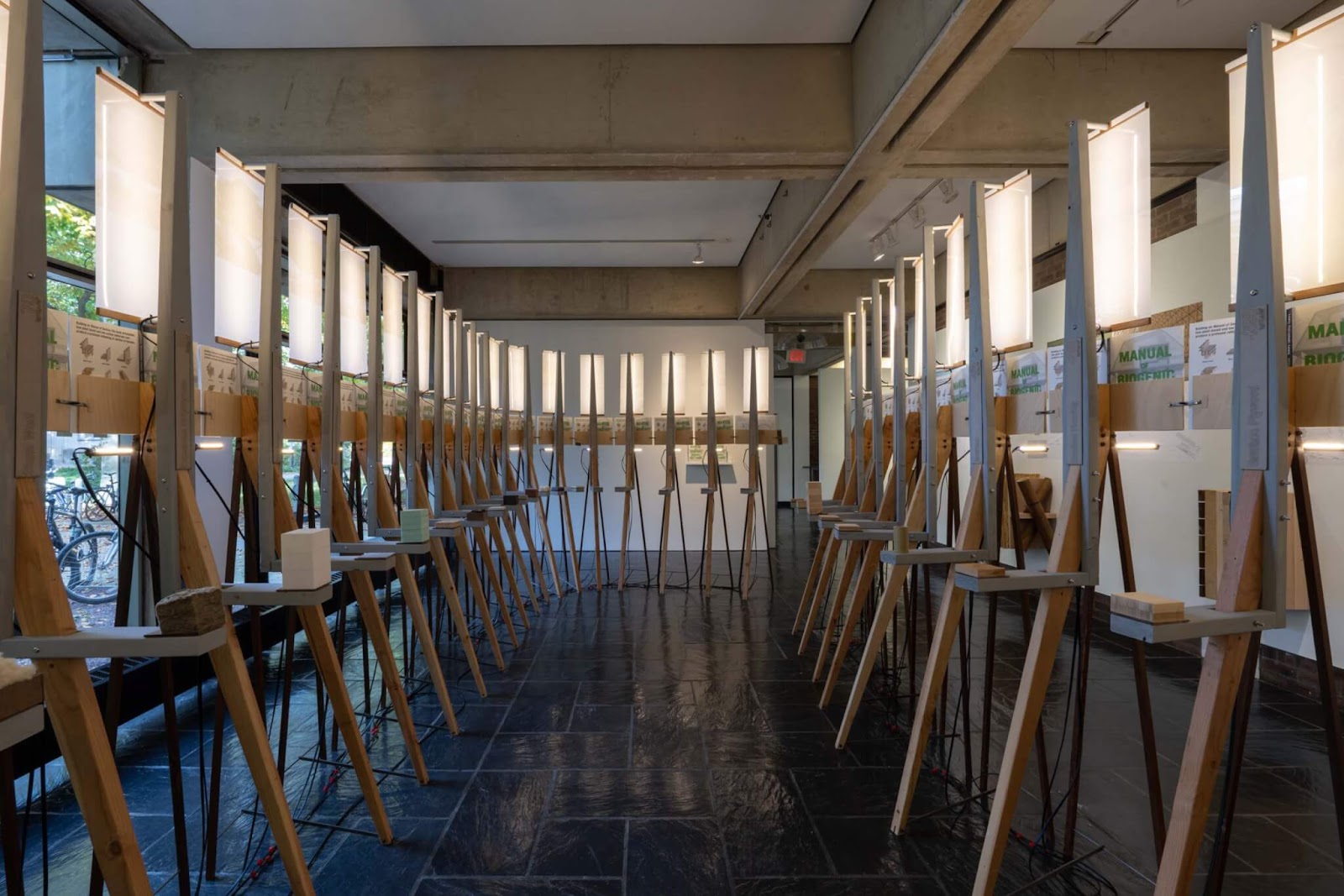 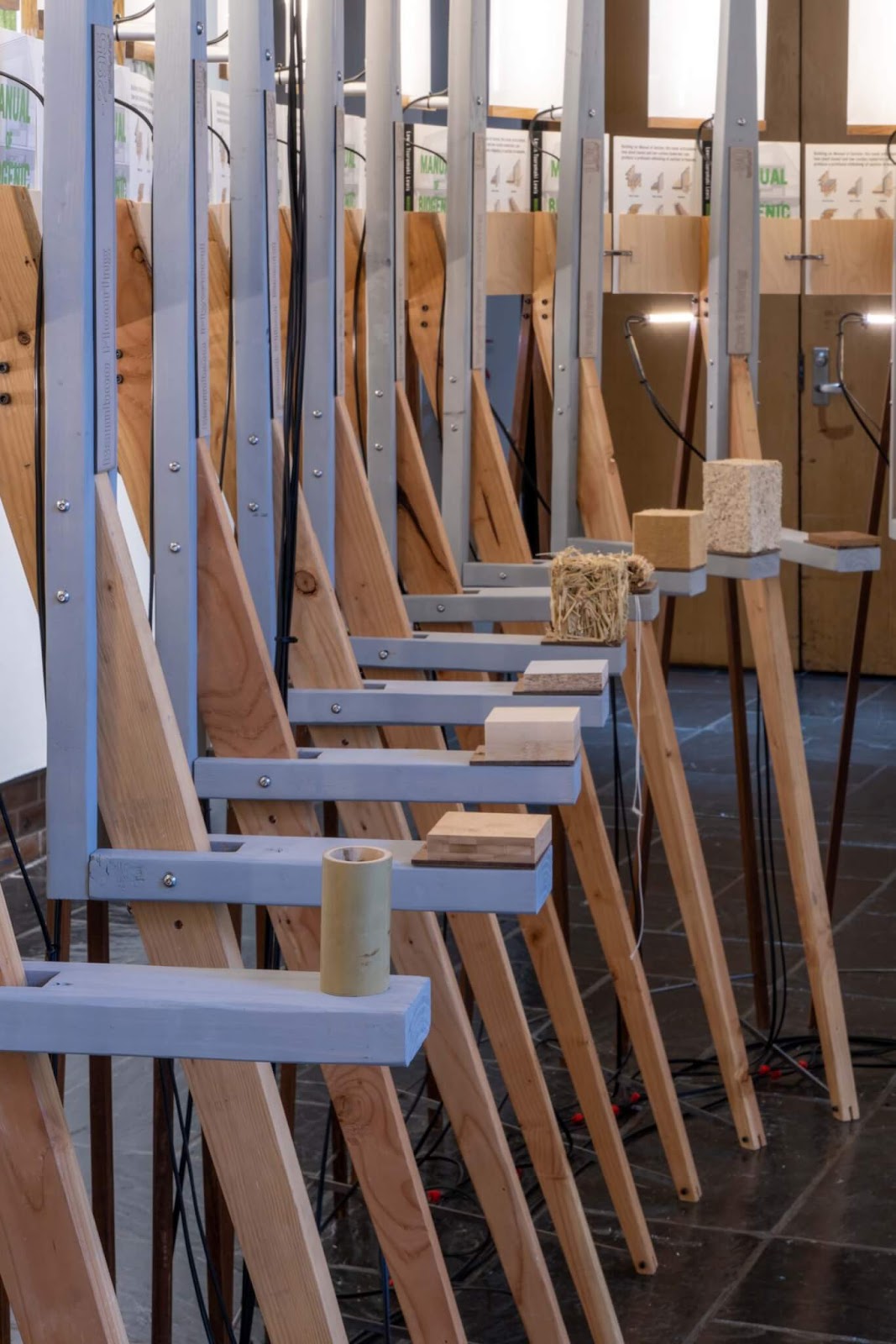 The exhibit’s second component is encountered along the interior perimeter of the tripods’ cellular arrangement. Here, individual building materials are presented in order from the most sequestering to the most emitting. The gray stand additions hold a cubic sample of the material, and a lasercut piece of chipboard displays the materials’ performance in kilogram of CO₂ per cubic meter. What is the most offending material? Galvanized steel (21,666 kgCO₂e/m³). What is the most beneficial on view? Surprisingly, according to LTL’s research, the answer is OSB (-633 kgCO₂e/m³). In the middle, the spectrum runs from net-negative biomaterials to more industrially manufactured products: CLT, MDF, plywood, bamboo, straw bale, cork, rammed earth, pink fiberglass insulation, batt insulation, white foam, blue foam, concrete, brick, stone flooring, glass, and onwards.

The third aspect of the show is pinned to the outer walls of the gallery: LTL has designed five houses using biogenic materials “as a catalyst for building form, domestic organization, and spatial seduction.” These include a mass straw house (built with jumbo straw bales and, above a layer of clay plaster, internally lined with cork), a lamella earth house (a tall, pointed diagrid of bamboo sheathed in a thatch roof around a rammed earth interior volume), a CLT A-frame (CLT lined with insulation and faced in natural stained wood siding, arranged in a tall, thin form that progressively opens upward), a straw-bale spiral house (a Loosian, raumplan-like spiral of rooms outlined in CLT within a jumbo straw bale volume, complete with a thick, overhanging roof), and a bamboo grove house (a field of laminated bamboo slats supported by bamboo columns above a interior box, again built with bamboo but pumped with HempLime™ [hempcrete] insulation). Each building is imagined in an ideal climate for its construction strategy. The designs are imaged in sections and diagrams with renderings done in LTL’s sketch-over-SketchUp aesthetic. Below, 1:1 mockups of wall sections give a sense of the actual dimensions and materials in use. 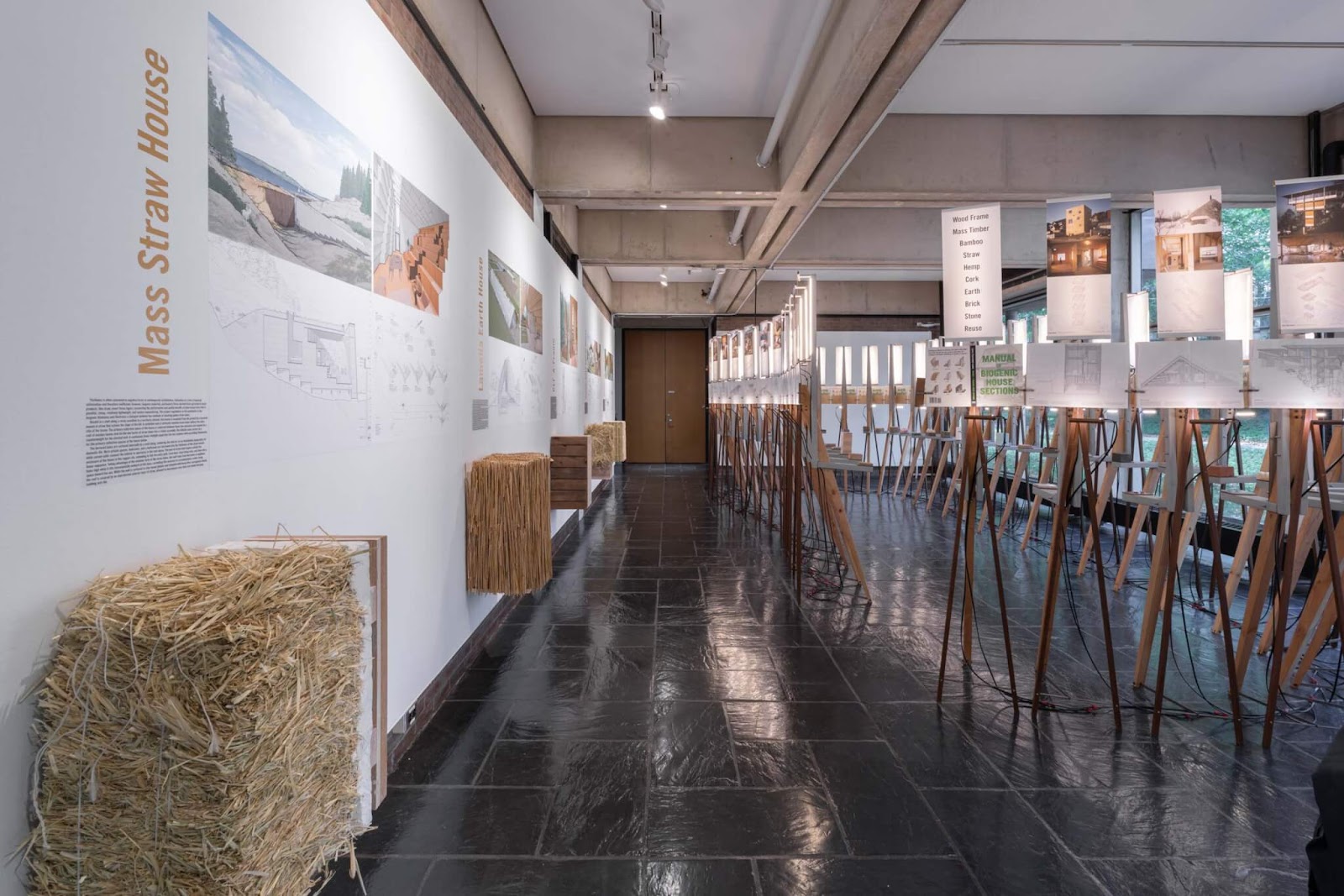 As LTL writes in a pamphlet on these five houses, the speculative designs aim to decouple the actual detailed bits of architecture from the standard reliance on products made with petroleum. Instead, they set a course for an architectural practice that “embraces and is in turn informed by dynamic and regenerative cycles of material use.”

Rather than a reliance on “an inherent nostalgia for the traditional forms of building historically associated with a given material,” which might, for example, have architects perpetually resorting to known shapes—repeating “housey-houses” ad infinitum, so to speak—LTL argues that more ambitious aims could create “new and seductive projects that can galvanize broader public adoption of biogenic materials.” Rather than merely substituting materials, they articulate the need to transform the “size, form, and performance” of homes moving forward. The scope of the exercise is bracketed by a focus on the home as a standalone unit; the five new homes are situated in rural or suburban environments, not in denser urban areas. It’s a hard thing to change the minds of those who might be able to build an ambitious single-family home; it’s even harder to do so at the scale of multi-family buildings with the attendant requirements of more robust structures, budgets, and agreements.

LTL’s exhibit surfs the wave of growing consensus that serious attention must be paid to the stuff of buildings if any big dent is to be made in the carbon footprint of the built environment. In echoing Michael Pollan’s culinary maxims—“Live in physical spaces. Not too big. Made from plants.”—LTL sets in motion a design imagination that uses “limited available resources for maximum performative and spatial potential.” The results, as seen in their proposals and in the installation overall, will be fiercely pragmatic, determinedly unorthodox, and, above all, straight-up strange. Bring it on.

Once the show closes next week, the exhibition will be on display at the Center for Architecture in New York from January 24 to January 29. LTL will celebrate the arrival of Manual of Biogenic House Sections with an opening/book launch event on January 26 at 6pm.