RESILIENT COASTS: FORESTS AND ADAPTATION on display at the MAXXI in Rome, as part of Technoscape: The architecture of engineers – through April 10, 2023 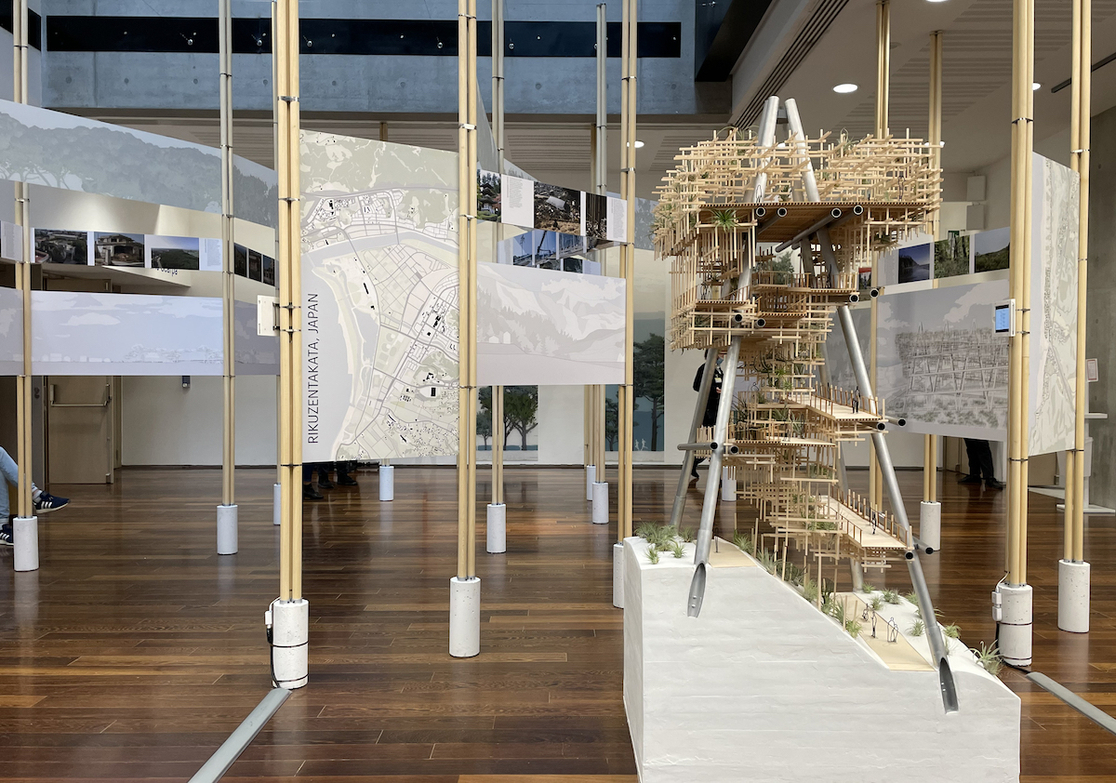 The architecture of engineers

RESILIENT COASTS: FORESTS AND ADAPTATION examines the cultural role and structural properties of forests and architecture as climate adaptation strategies in three regions around the globe—Rikuzentakata in Tohoku, Japan; Castel Volturno in Campania, Italy; and Neskowin, Oregon in the USA. Each region possesses distinct relationships to sea level rise, tsunamis, and to trees: as climate protectors, building materials, and entities that hold cultural capital.

RIKUZENTAKATA, a small city in northern Japan, lost close to a tenth of its population in the March 11, 2011 Tohoku Earthquake and tsunami. The city’s ten-year reconstruction plan—a massive infrastructural effort to raise the ground and build a concrete seawall—has transformed the coast. Rikuzentakata presents disaster response techniques deployed in one of the most tsunami-prepared and tsunami-affected regions in the world. It exemplifies the impacts of post-disaster reconstruction and relocation on humans and ecosystems.

CASTEL VOLTURNO, a city in which nearly half of the population is comprised of undocumented migrants, lies north of Naples along the Falerno-Domitio Littoral coast on the Tyrrhenian Sea. A recreation route through the city provides walking and biking access between previously non-accessible and abandoned natural features to mitigate coastal erosion and flooding, the region’s primary climate challenges. Interweaving a complex socio-political environment controlled by the Camorra, the plan provides design interventions at the human scale: toilets, drinking fountains, solar-powered lighting, and shaded seating for civic accountability, safety, and solidarity.

OREGON faces a one-in-three chance of a high-magnitude earthquake in the next fifty years with little political, cultural, or infrastructural preparation in place. Responding to carbon-intensive engineering, the design for a tsunami evacuation tower in Neskowin, Oregon integrates earthworks, the forest, and architecture. Providing refuge in the immediate event of a tsunami, the steel and cross-laminated timber structure serves as an everyday sanctuary for wildlife and a gathering space for the public, while connecting adjacent natural landscapes over the course of long-term climate adaptation.

The exhibition is arranged in two sections corresponding with the two great universes of technological innovation and construction engineering.

Along the first itinerary, developed in collaboration with universities and research centres, we will discover installations and interactive pavilions that will allow us to understand the role played today by scientific and technological sectors that we would never have imagined in conjunction with architecture: from science applied to the environment to “smart” devices for city management, from the obsession with big data to the return of vintage, low-tech assembly techniques.

Along the second itinerary, organised into thematic areas, we find the work of great structural engineers from the post-war period to the present day, highlighting several approaches and symbolic buildings such as the Beaubourg or the Sydney Opera House, and the most striking cases where the task of form-finder falls entirely on the structural designer.