The Architecture of Collage: Marshall Brown featured in Hyperallergic 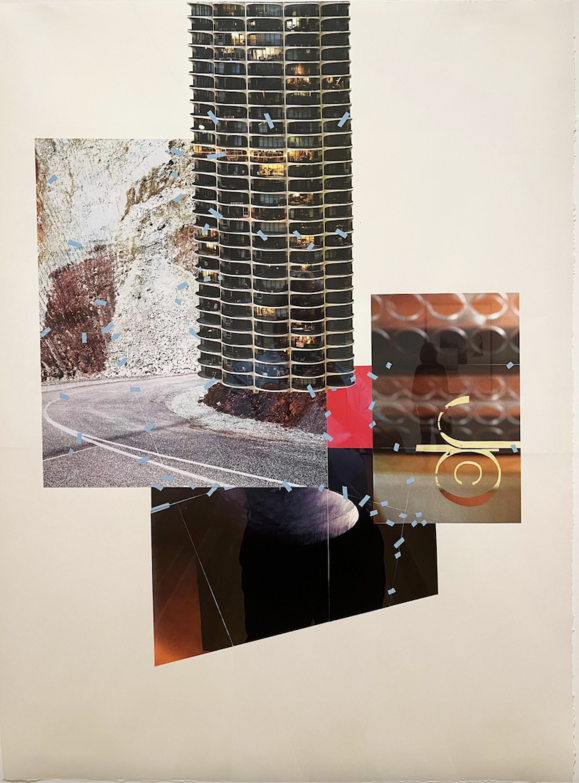 SANTA BARBARA — A day before the opening of The Architecture of Collage: Marshall Brown a group of museum patrons gathered in the Family Resource Center of the Santa Barbara Museum of Art where Brown — a trim, bespectacled Princeton professor — was on hand to walk them through his collage process. While snipping through stacks of photocopies, which included photos of iconic structures designed by Mies van der Rohe, Louis Sullivan, Eero Saarinen, and others, Brown and the workshop’s participants traded ideas. When one woman offered her thoughts on using musical analogies when arranging collage elements Brown was immediately interested: “That’s good: I might steal that …” he quipped.

As collages took shape around the table Brown talked about the importance of seams — they help disrupt the reality of cut and pasted collages — and encouraged the use of both torn and cut edges. He also suggested taping images in place, evaluating their effect, and then moving them to another location. Working this way, he explained, would lead to surprises.

Brown’s own collages, which curator James Glisson says “bring into focus elemental aspects of how buildings are constructed, experienced, and mentally visualized,” are full of unexpected shifts. For example, his 2021 collage “The Round Tower” relocates one of architect Bertrand Goldberg’s Marina Towers, which stand on the banks of the Chicago River, into a new setting that consists of imposing granite crags and a massive, curving highway. Like many of his collages, “The Round Tower” constitutes a wry musing on how the functions and contexts of architecture can be unlocked with a dose of irrationality.

At the end of the collage workshop everyone walked upstairs to preview Brown’s exhibition, which includes his ambitious “Piranesian Map of Berlin, ca. 1986” (2022), an aestheticized and rejiggered projection of urban reality. Bringing together fragments of various maps over time it creates an imaginative fantasy constructed through a process Brown thinks of as “honorific theft.” Like his collages, it challenges us to find inspiration in the past by applying a kind of imaginative irrationality that opens the door to future possibilities.