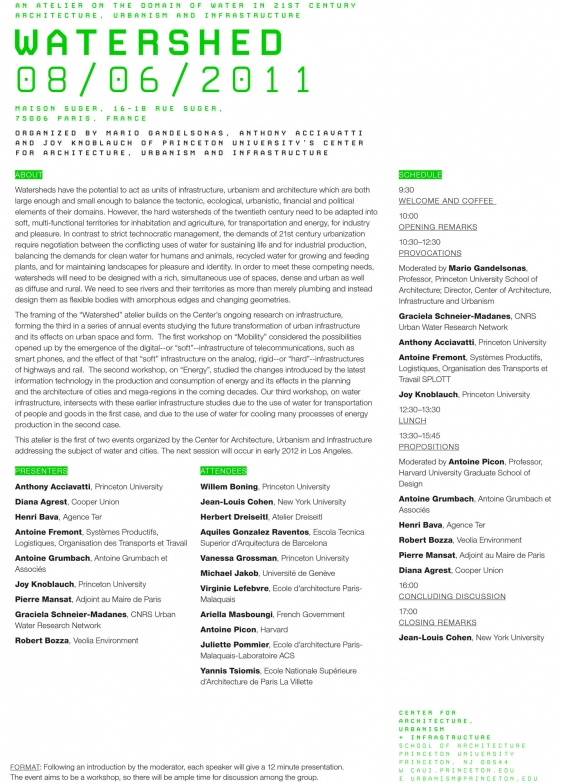 Watersheds have the potential to act as units of infrastructure, urbanism and architecture which are both large enough and small enough to balance the tectonic, ecological, urbanistic, financial and political elements of their domains. However, the hard watersheds of the twentieth century need to be adapted into soft, multi-functional territories for inhabitation and agriculture, for transportation and energy, for industry and pleasure. In contrast to strict technocratic management, the demands of 21st century urbanization require negotiation between the conflicting uses of water for sustaining life and for industrial production, balancing the demands for clean water for humans and animals, recycled water for growing and feeding plants, and for maintaining landscapes for pleasure and identity. In order to meet these competing needs, watersheds will need to be designed with a rich, simultaneous use of spaces, dense and urban as well as diffuse and rural. We need to see rivers and their territories as more than merely plumbing and instead design them as flexible bodies with amorphous edges and changing geometries.

The framing of the “Watershed” atelier builds on the Center’s ongoing research on infrastructure, forming the third in a series of annual events studying the future transformation of urban infrastructure and its effects on urban space and form. The first workshop on “Mobility” considered the possibilities opened up by the emergence of the digital—or “soft”—infrastructure of telecommunications, such as smart phones, and the effect of that “soft” infrastructure on the analog, rigid—or “hard”—infrastructures of highways and rail. The second workshop, on “Energy”, studied the changes introduced by the latest information technology in the production and consumption of energy and its effects in the planning and the architecture of cities and mega-regions in the coming decades. Our third workshop, on water infrastructure, intersects with these earlier infrastructure studies due to the use of water for transportation of people and goods in the first case, and due to the use of water for cooling many processes of energy production in the second case.

This atelier is the first of two events organized by the Center for Architecture, Urbanism and Infrastructure addressing the subject of water and cities. The next session will occur in early 2012 in Los Angeles.