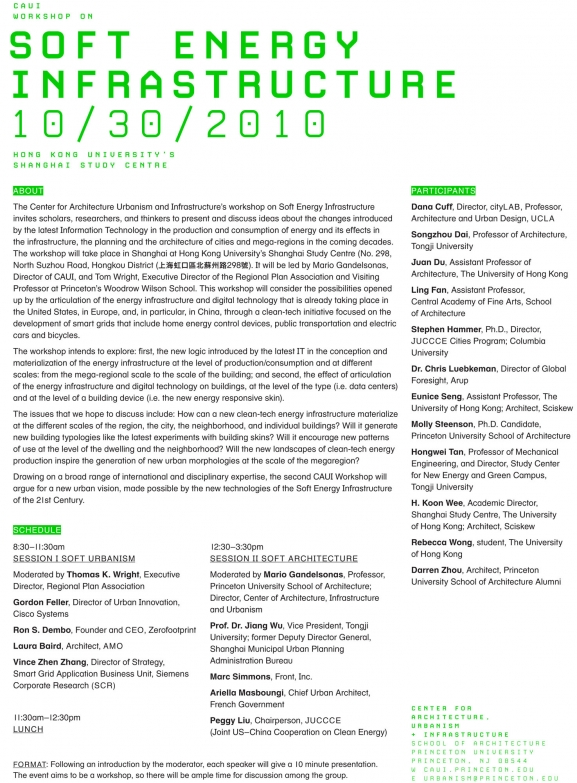 The Center for Architecture Urbanism and Infrastructure’s workshop on Soft Energy Infrastructure invites scholars, researchers, and thinkers to present and discuss ideas about the changes introduced by the latest Information Technology in the production and consumption of energy and its effects in the infrastructure, the planning and the architecture of cities and mega-regions in the coming decades. The workshop will take place in Shanghai at Hong Kong University’s Shanghai Study Centre. It will be led by Mario Gandelsonas, Director of CAUI, and Tom Wright, Executive Director of the Regional Plan Association and Visiting Professor at Princeton’s Woodrow Wilson School. This workshop will consider the possibilities opened up by the articulation of the energy infrastructure and digital technology that is already taking place in the United States, in Europe, and, in particular, in China, through a clean-tech initiative focused on the development of smart grids that include home energy control devices, public transportation and electric cars and bicycles.

The issues that we hope to discuss include: How can a new clean-tech energy infrastructure materialize at the different scales of the region, the city, the neighborhood, and individual buildings? Will it generate new building typologies like the latest experiments with building skins? Will it encourage new patterns of use at the level of the dwelling and the neighborhood? Will the new landscapes of clean-tech energy production inspire the generation of new urban morphologies at the scale of the mega-region?

Drawing on a broad range of international and disciplinary expertise, the second CAUI Workshop will argue for a new urban vision, made possible by the new technologies of the Soft Energy Infrastructure of the 21st Century.