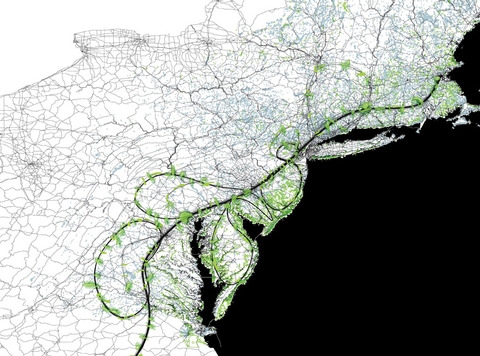 Radical changes in new technologies of media, engineering, communication, and information processing have begun to challenge our understanding of infrastructures and the cultures associated with them. Some of the constraints imposed by mobility have been overcome by new technologies in computing and media; others remain, as demonstrated by the growth of train networks, and the vast contemporary economy of transportation. This tension between new and old technologies, between new and old patterns of use, outlines one area of interest for CAUl’s research. How can new infrastructures integrate with traditional ones in the fluid, light, modernity in which we live? How might they affect our existing cities, our understanding of the public sphere, and the roles of future urbanists and architects?

Our research examines the implications of the coupling of hard and soft infrastructures for the potential development of new land use patterns and of new spatial and formal configurations at the macro-scale of the Megaregion, at the meso-scale of metropolitan areas, and at the micro-scale of urban buildings and spaces.

The urgency of the question of infrastructure stems not only from the aging of our “hard” infrastructure but also from the recognition that the “Megaregion” has become the norm as a new form of agglomeration, superseding metropolitan developments of the twentieth century.

Expanding upon Jean Gottman’s 1957 notion of the “Megapolis” as a continuous chain of metropolitan areas, the Megaregion describes the urban growth that currently takes place in extended networks of metropolitan regions linked by environmental systems, transportation networks, economies, and culture. Just as metropolitan regions grew from cities to become the geographical units of the twentieth-century economy, Megaregions, as agglomerations of metropolitan regions with integrated labor markets and infrastructures, are replacing the metropolis. The CAUl research program proposes the state of New Jersey, the geographic center of the Northeastern Megaregion, as an ideal laboratory for the investigation of the new twenty-first century infrastructures and the re-conceptualization and redevelopment of the nation’s extended networks of nineteenth-and twentieth-century “hard infrastructures.” Broad in scope but focused in intent, the trajectories of this research are directed both inward and outward. They include examinations of local sites within the Megaregion as well as other national and international locations that relate to it.