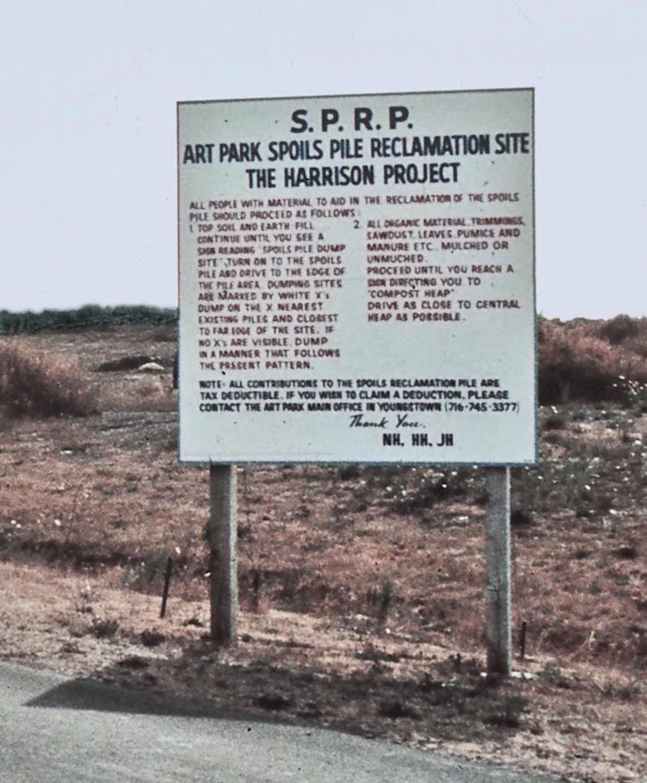 “Public Displays Of Effection: Ecological Art and Utility, 1968–1984” examines a pivotal but neglected group of artists who rejected traditional notions of the art object and instead considered it as a tool for achieving environmental remediation. This innovative approach to the art object required a parallel transformation in the viewer, who instead became a user. This new dynamic gave these artworks an explicitly architectural logic—one that made them difficult to recognize as art, and yet enabled their viability. Because the works served a tangible function, they found financial support beyond conventional patronage and so withstood the decline of arts funding. The contemporary cultural landscape—from artist-run community gardens and free schools to public practice more broadly—is indebted to the legacy of this work, which has been overshadowed within scholarly criticism absent an account of such interaction as the most urgently needed form of art and architectural design.

The first of these actors is artist and curator Gyorgy Kepes, professor in the School of Architecture at the Massachusetts Institute of Technology (1945–74) and founder of its Center for Advanced Visual Studies. Kepes was an early champion of projects that both facilitated awareness about the Earth's most pressing problems while simultaneously developing viable solutions. Some have written about the interdisciplinary efforts within Kepes's curatorial oeuvre, but there has been little focus on his conception of the user for whom he designed these collaborations. The first chapter focuses specifically on Kepes's later writings, namely two of his unpublished books: "Art on a Public Scale" (1970–74) and "Arts of Participation" (c. 1970–74). These unpublished transcripts evince Kepes's longstanding but understudied interest in coordinating a shift in the user's inter-spatial and interpersonal perspectives specifically for the purpose of reshaping their awareness of nature as part of the commonwealth.

Another chapter is among the first extensive looks at artist Robert Smithson's letter campaign to mining corporations in the years and months leading up to his untimely death. Smithson piggybacked on regulation of the mining industry, which required companies to reclaim their mines if not to their original state, then at least for some other "useful" purpose. The artist capitalized on the ambiguity of this term, offering to rebuild the mining industry's sites and its image with Earthwork. Negotiations for the first of these projects were under discussion when the artist died in a plane crash, and his essay "Earth Art and Mining Reclamation" (1971) was never published. Smithson's wife and occasional collaborator Nancy Holt would continue the charge with her landfill reclamation works Dark Star Park (1979) in Arlington, Virginia and Sky Mound (1984–present) in Hackensack, New Jersey.

The work of artist Mierle Laderman Ukeles has been subsumed under the category of Land art, a movement dominated by men and exemplified by such works as Michael Heizer's Double Negative (1969–70). Heizer, though he made large-scale artworks using materials from the Earth, in no way sought to conserve the environment, nor did he engage viewers at the level of activism. Ukeles's work, on the other hand, was both preservation-driven and public--qualities that hinged on the artist's interest in making her work accessible enough to be used. The chapter devoted to her begins in 1969, when Ukeles wrote her "Manifesto for Maintenance Art," in which she draws a comparison between art making, female care giving and sanitation work. Ukeles's synthesis of the preservation of life with the preservation of a city generated what became an intensely public practice: her collaboration with the New York Department of Sanitation. Though completed in 1969, the manifesto was not published until 1971, when art historian Jack Burnham included part of Ukeles's text in his Artforum article "Problems of criticism: art and technology" (1971). The chapter ends in 1984, when Ukeles began making artworks about Staten Island's Fresh Kills Landfill, which since and with her assistance is in the process of becoming a public park.

Jack Burnham also promoted the early career of "problem-solving artists" Newton and Helen Mayer Harrison. The final chapter addresses the Harrisons multi-part "Survival Series," a series of projects wherein the artists cultivated foodstuffs in a gallery setting. Their strategy was altogether different from contemporaneous attempts to revisit the landscape tradition. The couple was more interested in producing fertile landscapes than they were in creating immersive ones, such as Walter De Maria's Earth Room (Munich, Germany; 1968). Their installations, which included "flat and upright" pastures and were often accompanied by "feasts," offered restorative solutions to deforestation and a model for self-sufficient food production in the wake of increased industrial farming. They eventually magnified their interest in putting unproductive domesticated landscapes to good use as small-scale farms by putting unproductive landfills to good use as public parks, namely the Spoils' Pile Reclamation (1976–78) in Lewiston, New York.