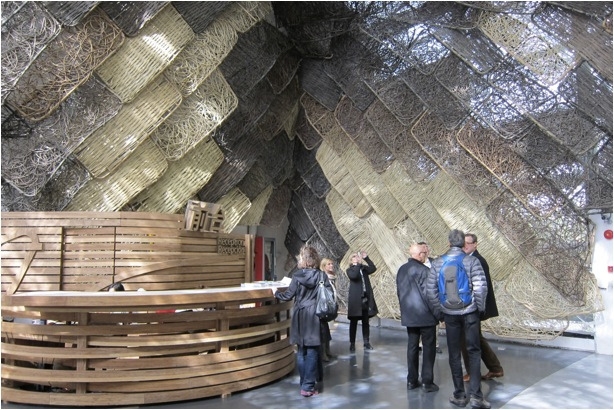 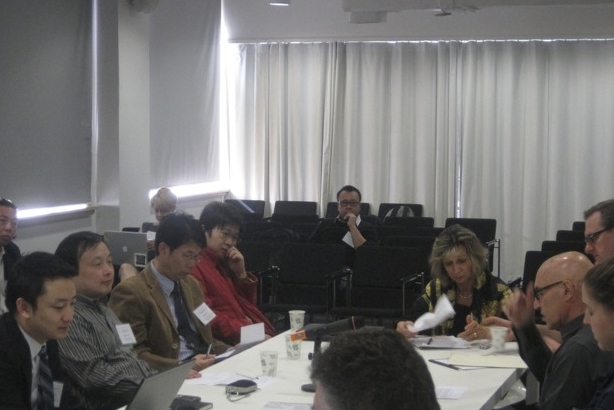 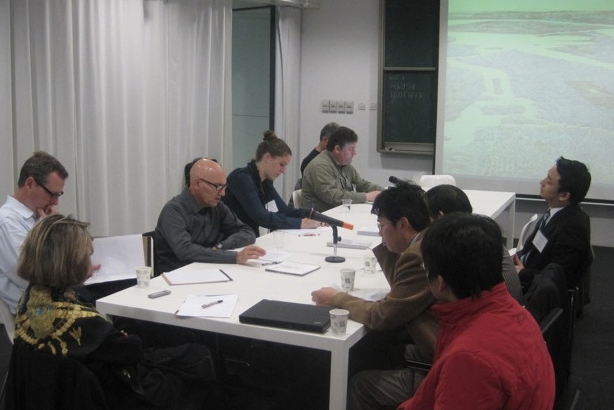 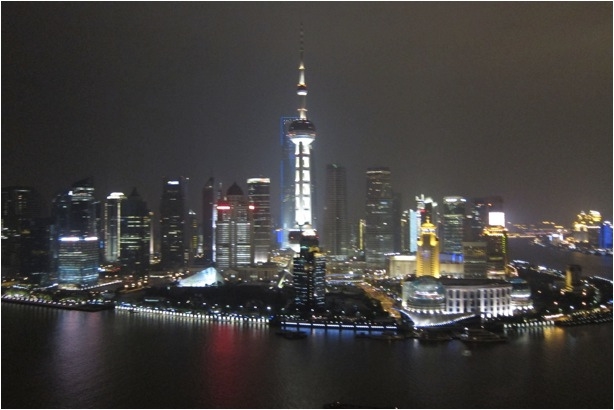 In late October, the Princeton Center for Architecture, Urbanism and Infrastructure (CAUI) convened the “Soft Energy Infrastructure” workshop in Shanghai, China, held at the Shanghai Study Center of The University of Hong Kong. Led by Professor Mario Gandelsonas of the Princeton School of Architecture and Tom Wright, Executive Director of the Regional Planning Association, and with workshop speakers and participants from China, the US, France, the Netherlands, and beyond, the workshop tackled issues of energy infrastructure and its architectural and urban response. Workshop participants also visited the World Expo 2010 Shanghai in its final week and received a private tour of the Cisco Pavilion.

“Soft Energy Infrastructures” examined the pliable, flexible nature of new, electronically mediated infrastructures as opposed to traditional “hard” and inflexible infrastructures. Soft also means smart: smart grids, smart design, smart education, smart visualization. The workshop asked such questions as: How is energy demand and delivery changing the way we design our cities and buildings? What is the impact of energy infrastructure on architecture? How do we move beyond sustainability? How can our cities adapt to 21st century energy needs?

The morning session, “Soft Urbanism,” considered the implementation of energy infrastructure at the small and large scale, whether in a local neighborhood or across a continent. Vince Zhen Zhang, Director of Strategy for Smart Grid Applications at Siemens China, outlined ten ways that smart grids are being applied to cities in China, including carbon and grid management planning, smart metering, demand response and building automation. He noted that the density of a city like Shanghai makes wind turbines impractical but encourages proximate generation, where neighborhood fuel cells nearby provide localized power. At the other end of the spectrum, architect Laura Baird presented AMO’s proposal for a North Sea wind turbine farm to generate energy across Europe. Her presentation highlighted tensions with integrating sustainability into architecture and methods of bolstering the indeterminacy of wind power with solar power from the continent’s sunnier, southern regions.

How can technology drive changes in urban energy infrastructure? Gordon Feller, Director of Urban Innovations for Cisco’s Internet Business Solutions Group, described the emergence of the Internet of Things and how it distributes intelligence to manage energy consumption. Ron S. Dembo, Founder and CEO of Zerofootprint, presented his company’s benchmarking and comparison platforms that show energy consumption and carbon footprints for companies, schools and individuals. In order to be effective, easy visualization of information proves important for such an approach. “Invisible architecture is just as important as the visual,” he said. By making this information available, individuals, schools, and companies can see ways to change how they consume energy. Zerofootprint also creates games and competitions for the lowest footprint.

The afternoon session turned to “Soft Architecture,” which looked at qualitative and design for energy infrastructure. Jiang Wu, Vice President of Tongji University and former Deputy Director General of the Shanghai Municipal Urban Planning Administration Bureau, linked the architectural and the urban in a discussion about transportation and energy. Just 20 years ago, nobody would have envisioned modern highways across China; now they are ubiquitous, he said. But now the question is how to make them more energy and cost efficient. Similarly, China now boasts 7,000km of high-speed rail. An audience member asked about the diversity of rail infrastructure: high-speed rail costs twice as much, and “hard seat” tickets have been eliminated. What about those, such as farmers or students, who might sacrifice time for a cheaper ticket? Stephen Hammer, Director of the Cities program for the Joint US-China Collaboration on Clean Energy (JUCCCE), pointed out that there are clear parallels between this discussion of transportation and the smart grid, with differentiation of services. Microgrids can charge more and offer better quality electric service. Laura Baird mentioned that in Russia, people make a similar decision: “Sorry, natural gas is all I can afford.”

In “City and Energy,” Ariella Masboungi, Chief Urban Architect of the Republic of France, presented a number of self-sufficient, zero emission, and positive energy projects (projects that generate as much or more energy than they consume) in Europe. New projects in France must be resilient, save and produce energy and handle water issues, which means incorporating solar roofs, photovoltaic facades, geothermal energy sources, urban heating networks and shared urban energy resources. She showed the Pioneer Building, France’s first positive energy building, and the Nantes Airport, designed by Jacques Ferrier for zero emission and a positive energy balance, among a number of other projects. She also described the practices of companies like the retailer Monoprix, which uses rivers to transport its goods: it takes three days longer but produces 298 fewer tons of carbon. Bringing the concept to a larger scale, Ron S. Dembo asked, “How do you retrofit a whole city?” He looks at reskinning buildings as a way of rethinking the city to make it more energy efficient.

Soft infrastructure could also include prompts for behavioral change, or “nudges” — elements built into a system to make it easier to use, said Peggy Liu, Chairperson of the JUCCCE. These could include showers with auto alerts at two minutes and heat sensors. She asked how architects could design for adaptability: what would that look like? Liu’s colleague Stephen Hammer presented a decision support tool developed for the World Bank for mayors to model energy efficient cities. A “one-stop shop” for managing a city’s energy efficiency, it provided information, recommendations and tools for data requirements, people to contact and methods for benchmarking so that cities can compare their performance against one another. Ron S. Dembo’s second presentation, “RiskThinking,” brought up hedging as an approach to designing for an ever-uncertain future: a “portfolio of options” for separating out the deterministic and the randomly determined.

The final discussion session of the workshop centered on planning, real estate development, and energy infrastructure. Can planning be made effective, and how? “Planning is too long, too cumbersome and doesn’t produce desirable results,” said Tom Wright. Dana Cuff, Director of cityLAB and Professor of Architecture and Urban Design at UCLA, pointed out that California tied greenhouse gas emissions to land use planning; Wright noted that 30 years of land use planning reduced the carbon footprint. Still, there stands the question of how real estate development undoes planning. Dembo suggested that cities reverse-engineer, incorporating adaptability into their planning models — a hedging process that considers criteria energy as well as aesthetics, cost, and reproducibility of methods.

“The long term view of buildings is an urban view,” said Professor Gandelsonas, one in which buildings are processes, not permanent objects. Where soft energy infrastructure stands, this means designing and building flexible and adaptive cities. But it also means taking a critical approach to “smart.” Smart isn’t just a matter of technology infrastructure: it is a matter of proper scale, whether hyperlocal or megaregional, of visualizing information and acting upon it, of social behavior and smart grids. In order to provide for the needs of 21st century cities and urban megalopolises, energy infrastructure will need to incorporate adaptable approaches through smart, soft infrastructure.

Originally published in from RUMOR 02.02 in Winter 2011.  “Soft Energy Infrastructure” is the second in a series of funded workshops on infrastructural issues.

Molly Wright Steenson is a Ph.D. student at Princeton University’s School of Architecture, where her research focuses on the nexus of urbanism, infrastructure, design and technology in the from the late 19th to the second half of the 20th century. Previous to starting her architecture and urbanism studies, Molly worked with the Web since 1995, spending time at a wide variety of companies including Reuters, Johnson & Johnson and Razorfish. As a design researcher, she examined the effect of personal technology on its users, with projects in India and China for Microsoft Research and Intel Research. She was a professor at the Interaction Design Institute Ivrea in northern Italy (now a part of the Domus Academy), where she led the Connected Communities research group. Molly holds a Master’s in Environmental Design from the Yale School of Architecture and a B.A. in German from the University of Wisconsin-Madison.