Searching for the Public Moment in Zuccotti Park 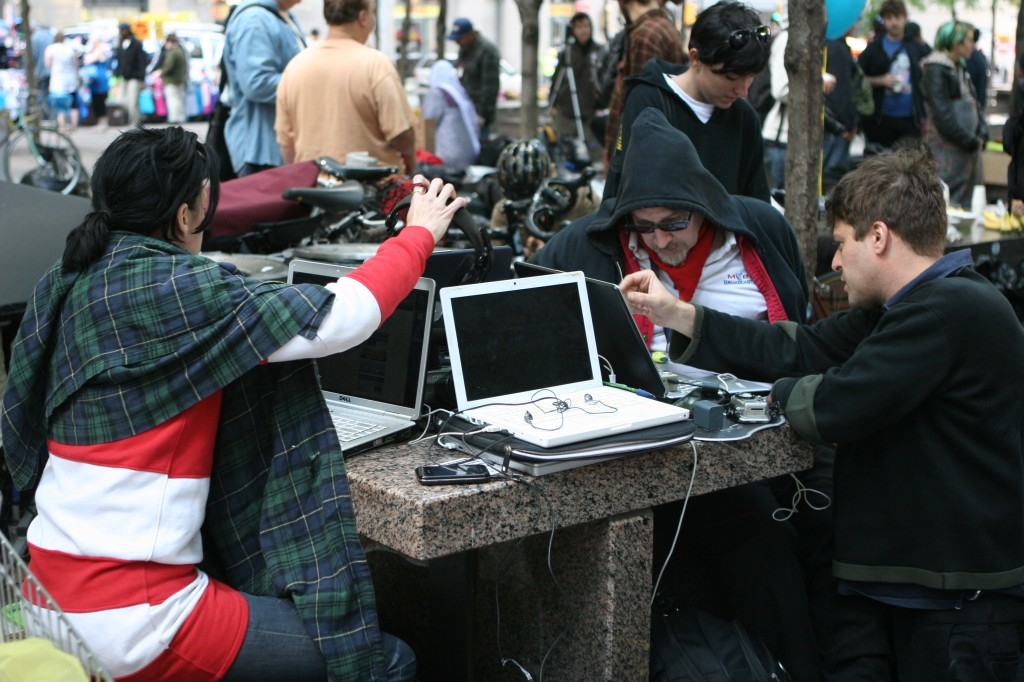 The physical infrastructure of Foley Square and its surrounding blocks established the tone for the evening of November 17th, the date that marked two-month anniversary of Occupy Wall Street and was dubbed the (inter)national day of action. While the square was overflowing with people, the makeshift placement of barricades reinforced the physical boundaries of public space and that the protesters’ actions were limited. NYPD helicopters, floating above the crowds of Foley Square, echoed this sentiment, as the enduring thumping of the blades (beating against the air to stay afloat) served as an inescapable reminder that air space, too, was subject to restriction.

Among the features of the movement that have garnered the most attention – e.g. its horizontal decision-making process, widespread populist appeal, and lack of specific demands – perhaps the most perplexing and seemingly contradictory has been the movement’s ability to make fluid the relationship between physical space of Zuccotti Park and a more metaphorical space that the movement has occupied via the internet and social media. The combination of physical occupation and subsequent reporting of this physical gesture on the internet infused the small park with meaning and caused the movement to spread nationally and internationally.

In In Search of the Public, a conference organized by CAUI five years ago at Princeton, Mario Gandelsonas spoke about public space and the role of “moments” in achieving place. He said, “’In search of public moments’ refers to time, which is the dimension where the city has always lived, at the point where it becomes space… Before public places can emerge, urban moments must first be possible. This quintessential element of urban environments is both the origin and the precondition for the public. It proves the context for the accidental encounter with the other—the meaningful moment of contact across difference—which is precisely what maintains the field of social enjoyment.”[1]

The city has always lent itself to the notion of place, with accidental encounters between diverse groups of people anchored to physical space. In the context of Zuccotti Park, the coupling of the physical and the virtual has transformed the notion of place, and the effect of face to face contact is amplified by social media. But with the forced removal of protesters and restricted media coverage of the eviction, the municipality confiscated the physical and virtual place (and time) of these occupants– swiftly sanitizing Zuccotti Park from the traces of “place” and “urban moment” left by these individuals and erasing a fluid narrative of the hours until the final removal.

Photograph by Paul Weiskel via The Atlantic.