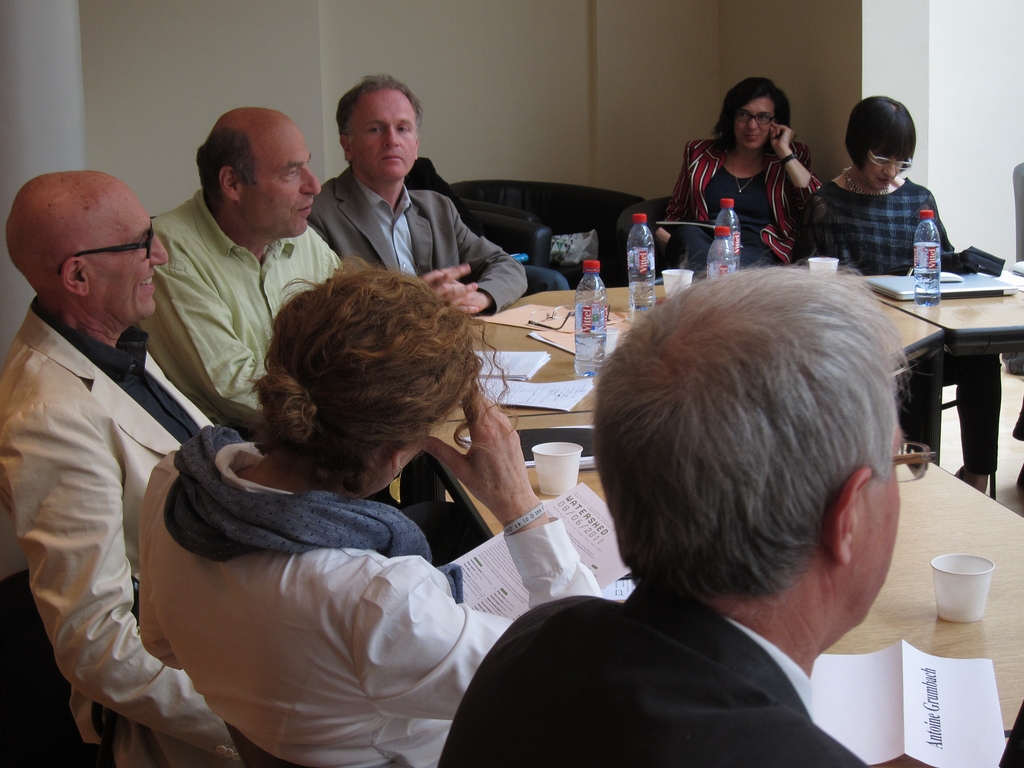 On June 8, 2011 CAUI hosted the Watershed Atelier on the domain of water in 21st century architecture, urbanism and infrastructure with presentations from a range of disciplines. As a whole, the workshop reinforced the importance of bridging between the detailed technocratic language of water and the spectacular pleasures and dangers of water at its many scales.

The need for outreach was present in Anthony Acciavatti’s discussion of pamphlets that teach residents about the dangers and best practices for living behind a levee and in Antoine Grumbach’s discussion of the role that the watershed of the Seine could have in giving identity and cohesion to the sprawling communities in the territory of the Seine. As several participants mentioned, the improvement of water’s domain in the future will depend on assembling the political will necessary to realize any such project, thus placing architects in the role of liaison with the public in addition to their role as designers. At Los Angeles in early 2012, the group of scholars and designers will continue the discussion of the ways that they can use their aesthetic expertise to alter the relation of environment, power and resource use at the architectural, urban and infrastructural scales.

To start the day, Mario Gandelsonas presented CAUI’s work on soft infrastructure and a case study on slow infrastructure in New Jersey followed by a series of ‘provocations’ aimed at framing the discussion about water. Graciela Schneier-Madanes of CNRS Urban Water Research Network presented the idea of a “water language” able to span the many constituencies, many types of water, and a brief history of the way regulation of water has already shaped the urban environment. Princeton University PhD student Anthony Acciavatti continued the excavation of the influence of government on development through the management of water in his presentation of the U.S. Army Corps of Engineers in the Mississippi River Basin. Geographer Antoine Fremont, of Systèmes Productifs, Logistiques, Organisation des Transports et Travail, presented a freight-based urban typology of the city and its relation to rivers through history, ending with a proposal for intermodal transportation infrastructure along a city’s edge. Joy Knoblauch, Princeton PhD candidate, examined the aesthetic regimes of the hybridization of urban and agricultural elements in the New York City watersheds and in urban agriculture in Detroit, Michigan, Shenyang, China and Brooklyn, New York.

In the afternoon session, the discussion turned from provocations for design to design proposals themselves. Antoine Grumbach of Antoine Grumbach et Associés presented his work on the Grand Paris project to connect Paris and Le Havre into a unified region connected by transportation infrastructure along the 300 kilometers of the Seine. Henri Bava of Agence Ter presented a project for Hamburg which would similarly connect it with its hinterlands with an urban shipping port of flood-ready islands. Shifting gears, Veolia Environment representative Robert Bozza provided a glimpse of the practices of global capital which select and guide novel approaches to water use and waste management at the 300,000 person company, active in 73 countries. Moving to a local perspective, Pierre Mansat, Adjoint au Maire de Paris, and his colleague Dominique Alba, Director of APUR, described projects to bring Parisians into closer, cleaner and more fulfilling contact with water along the banks of the Seine and through projects to cool citizens in the summer. Ending the day’s presentations, Diana Agrest of Cooper Union presented drawings of water features highlighting their potential to be sources, sites and contexts for design, ranging from Crater Lake to the Bering Strait.

In his closing remarks, Jean-Louis Cohen diagnosed a return of utopianism in the day’s discussion, but the mixture of disciplines, readings, and designs presented in the atelier are far from the pure utopias of the 20th century. The conversation at the atelier chose not to seek tabula rasa, technocratic solutions to the problems of water, infrastructure and environment. Instead, the participants were committed to solutions which are incremental, as well as politically and economically entangled in complex realities of industry, demographics and predictable disasters. In this, the day was typical of a new thread of architectural discourse suited to an age that accepts that everything that seems natural is largely constructed, that the environment depends on capital for its growth if not for its design, and that politics requires the production of aesthetics which can compel its various constituencies. It’s an age that grew up with such theoretical contradictions, and is now launched on asking, so what? How do those realizations help us to help ourselves? Where an earlier generation might have blanched at the instrumentalization of theory, the current conversation begins with the enrichment of the field produced by theory, and then continues with a robust base against which proposals can be tested. Exploring the domain of water in the 21st century is one part of figuring out how to approach a context wherein all solutions are incremental and always already politically and economically entangled in complex realities of industry, demographics and predictable disasters.

Joy Knoblauch is a Ph.D. Candidate in the History, Theory, and Criticism of Architecture, focusing on the interaction between architecture, government and population. Her dissertation argues that the newly softened institutional environments of the Great Society era were sites of biopolitical research, shaping a new direction for the discipline of architecture toward an enriched understanding of the heterogenous occupants of architecture. She has a Bachelors of Architecture from Cornell University, a Masters of Environmental Design from Yale University and she has worked in architecture offices in Ithaca, New York and San Francisco, California. Knoblauch’s research is supported by the National Science Foundation, the Centre Canadien D’Architecture and the Fellowship of Woodrow Wilson Scholars.