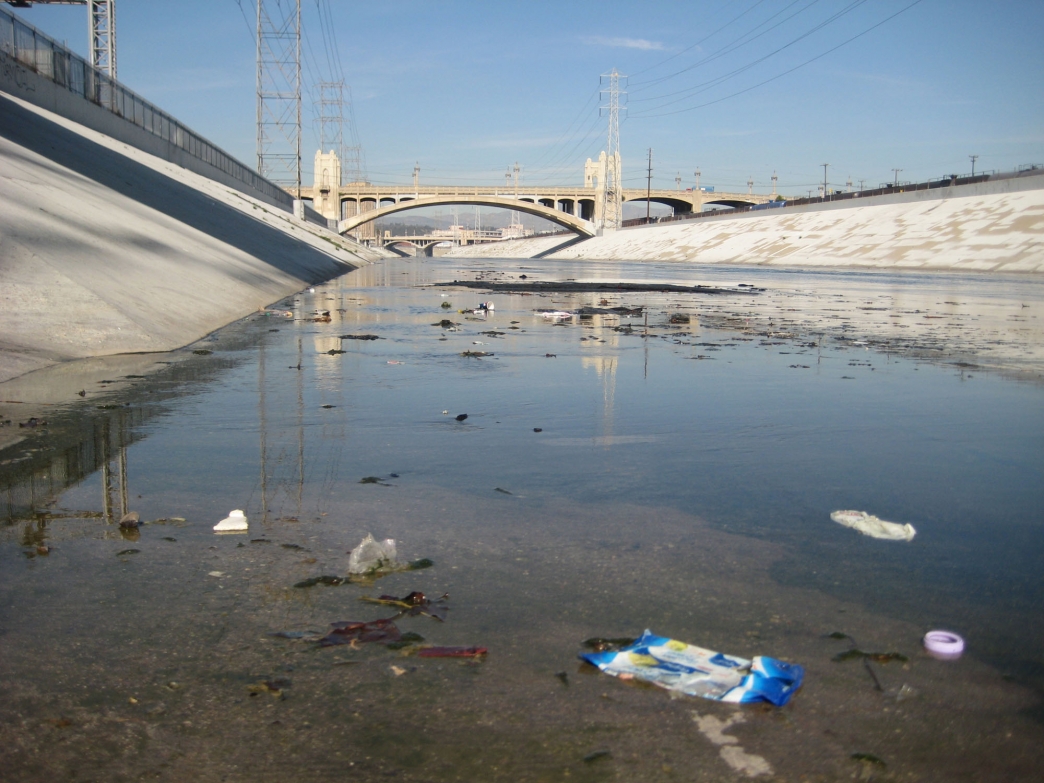 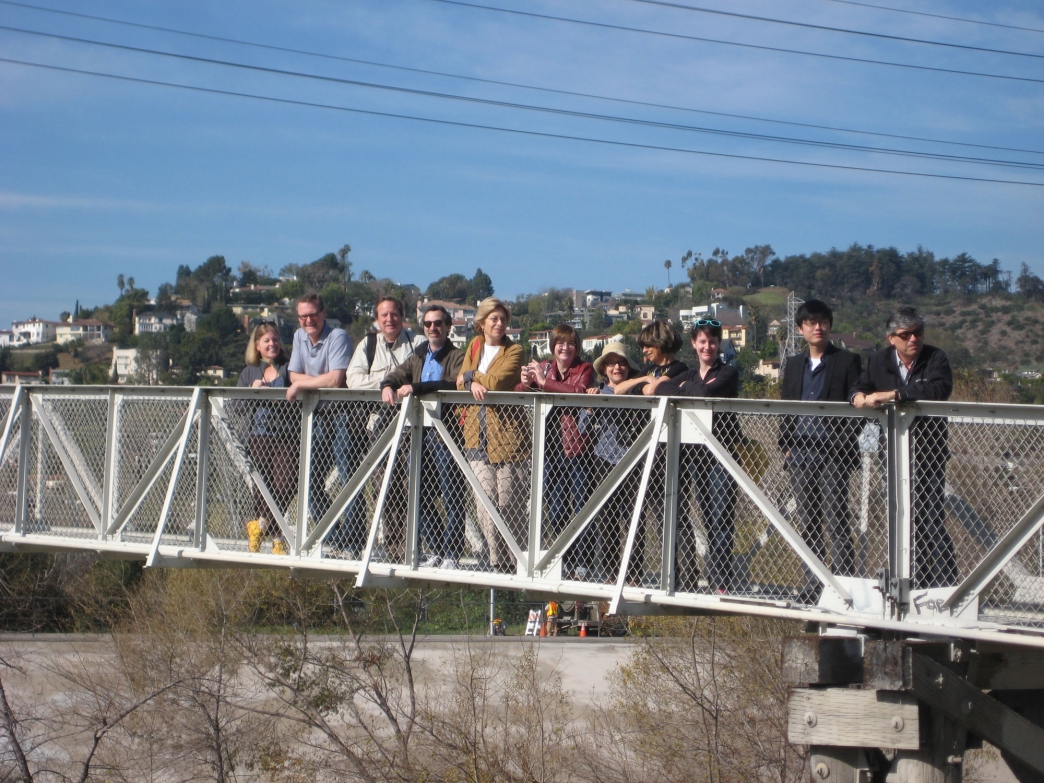 The Center for Architecture, Urbanism and Infrastructure continued our discussion of the domain of water in 21st century architecture, urbanism and infrastructure through a second workshop on the subject, this time in Los Angeles, California. Where the discussion at the previous Watershed Atelier in Paris in June of 2011 often focused on water as a transportation network and a guide for development, the Los Angeles conversation focused more on sustainability, the role of nature in growing urbanization, and strategies for coping with water scarcity. In his opening remarks, Mario Gandelsonas situated these issues within CAUI’s ongoing research on the interaction of the emerging digital infrastructure and existing 20th century urban infrastructures of Mobility and Energy, explored in previous workshops.

Before arrival in UCLA’s Perloff Hall, conference attendees were given a tour of the Los Angeles river, led by Jenny Price, writer, Los Angeles Urban Ranger, Research Scholar at the U.C.L.A. Center for the Study of Women and recent Anschutz Fellow in American Studies at Princeton University. Attendees were able to literally get their feet wet in a decidedly urban river, providing a shared and very immediate understanding of what hard water infrastructure is like. Through a visit to a comparably unpaved section of the river, they were also given a chance to imagine what the space could become if taken over, softened and greened, providing park space to under-served areas of Los Angeles and adding to the image of the city. Moreover, softening the river bed would increase the water available for human use, instead of sending it out to the ocean as fast as possible, as the hard, paved version does.

The organization of the conference followed the fictional construct of the water cycle. The first panel focused on the movement of water from Air to Surface and back again. Tom Wright, Director of the Regional Plan Association and moderator of the panel, opened by acknowledging his own water dislocation, traveling from an island surrounded by water to a context very much aware of the need to conserve water. Jenny Price then presented a history of the Los Angeles river in her talk, “The LA What??: Paving and Un-paving America’s Most Famous Forgotten River”. While the river was the site of the city’s founding, residents had since turned their backs on the river following its paving by the Army Corps of Engineers. Until 1985, when the friends of the LA River began what has become one of the best funded civic projects, a project of river revitalization by City of Los Angeles. Price showed how cleaning and greening the river would create a 51-mile greenway, connecting to public transportation and rail. Next, Rob Pirani of the Regional Plan Association spoke of the importance of public participation in such projects, using the example of the Brooklyn Greenway Project. Felipe Correa of Harvard University’s Graduate School of Design presented his analysis of “Urbanism Out of Water”, comparing Oman and the UAE to reveal the impact of using oil to pump water in order to maintain culturally significant oases. Then, Jane Harrison and David Turnbull of Atopia presented their design research, proposing architecture as a piece of infrastructure that is able to be both water filter, water retention and a place for play in their Pitch Africa project. And last, Nicholas You of The Citistates Group spoke of the questionable strategy of placing systems for clean water, sewage, data, gas, all in one space under the streets while arguing that we must understand that water and energy can’t be treated as separate issues.

Following the first panel, the discussion focused on the place of design in large political systems, with Wright positing that “regulation is the failure of design”. Given the similarities and differences between the examples presented, how can we best theorize water in order that the lessons of one context can be brought to another? While the paving of such rivers and waterfronts was the work of a large federal agency, the Army Corps of Engineers, how might smaller, local efforts learn from each other to make the process easier? The group debated the relative merits of having over-lapping jurisdictions or one large, potentially irresponsible actor or a nested hierarchy of agencies. Considering that water disregards such artificial political categories, how can we best govern and manage the places of water?

The second panel focused on the movement of water from Surface to Surface, moderated by Ariella Masboungji of the government of France. Hadley and Peter Arnold began the panel with their theorization of the American West and its identity with regard to water, starting with the realization in the 1870s that the Jeffersonian political and agricultural ideal would not work within the hydrological and topographical realities of the west. Graciela Silvestri then presented her journey accompanying a scientific-cultural expedition along the waterways of the proposed South American Channel, with all the potentials and dangers of opening a waterway through the continent. Next, Armando Carbonell of the Lincoln Institute of Land Policy argued for the need to live with rivers and flooding, to make room for the river. Then Liz Ranieri of Kuth / Ranieri presented one such scheme for adapting to a higher water level, in their inhabitable infrastructure for the San Francisco Bay which they call Folding Water. Tempered by Dana Cuff’s warning of the ‘National Geographic Effect’ of over-coloring and romanticizing water, the group considered the role of art and embodiment in capturing and influencing public perception of water.

Focusing on the movement of water from Surface to Subsurface and back, the third panel was moderated by Mario Gandelsonas, CAUI’s director. Anthony Acciavatti, Ph.D. candidate at Princeton and CAUI fellow, began the discussion with his mapping of the Ganga river and his exploration of the entwining of astrology and urbanism mediated by the shifting waters of the river. Hitoshi Abe presented stark footage of the disaster of the tsunami which followed the Great East Japan Earthquake. Next, landscape architect Margie Ruddick presented her design for Queens Plaza in Long Island City where she made use of technologies to clean and retain water. But beyond design, Ruddick explained the real challenge of overcoming overlapping jurisdictions which made it hard to get any single agency to agree to be the one responsible for cleaning out the filters. Ila Berman of California College of the Arts, compared New Orleans and Los Angeles under the theme of “Amplifying Extremes”. Diana Agrest of Cooper Union developed the idea of Nature, from the philosophical and scientific discourses using drawings from studios on “Architecture Of Nature/ Nature of Architecture”.

Where the discussion after the first panel focused on the potential for design within bureaucracy, the second discussion focused on the place of art and embodiment, the third discussion focused on the extremes and disruptions of water. The concluding round table was moderated by Dana Cuff of UCLA’s CityLAB. Cuff observed that the water conference was able to produce particularly strong discussions perhaps because it is founded on a more thorough knowledge base. In contrast to questions of energy or transportation, water and its place in urbanism has been studied historically, politically, ecologically and architecturally. The future potential for water to improve cities, regions, and infrastructures will no doubt be a crucial subject of research and speculation for a long time to come.

Joy Knoblauch is a Ph.D. candidate in the History, Theory, and Criticism of Architecture, focusing on the interaction between architecture, government and population. Her dissertation argues that the newly softened institutional environments of the Great Society era were sites of biopolitical research, shaping a new direction for the discipline of architecture toward an enriched understanding of the heterogenous occupants of architecture. She has a Bachelor of Architecture from Cornell University, a Master of Environmental Design from Yale University and she has worked in architecture offices in Ithaca, New York and San Francisco, California. Knoblauch’s research is supported by the National Science Foundation, the Centre Canadien D’Architecture and the Fellowship of Woodrow Wilson Scholars.