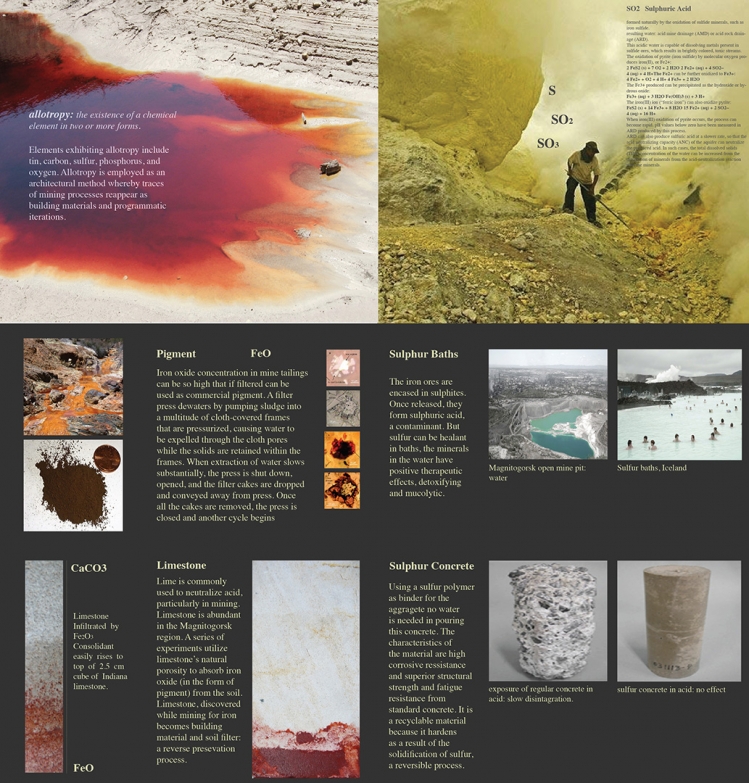 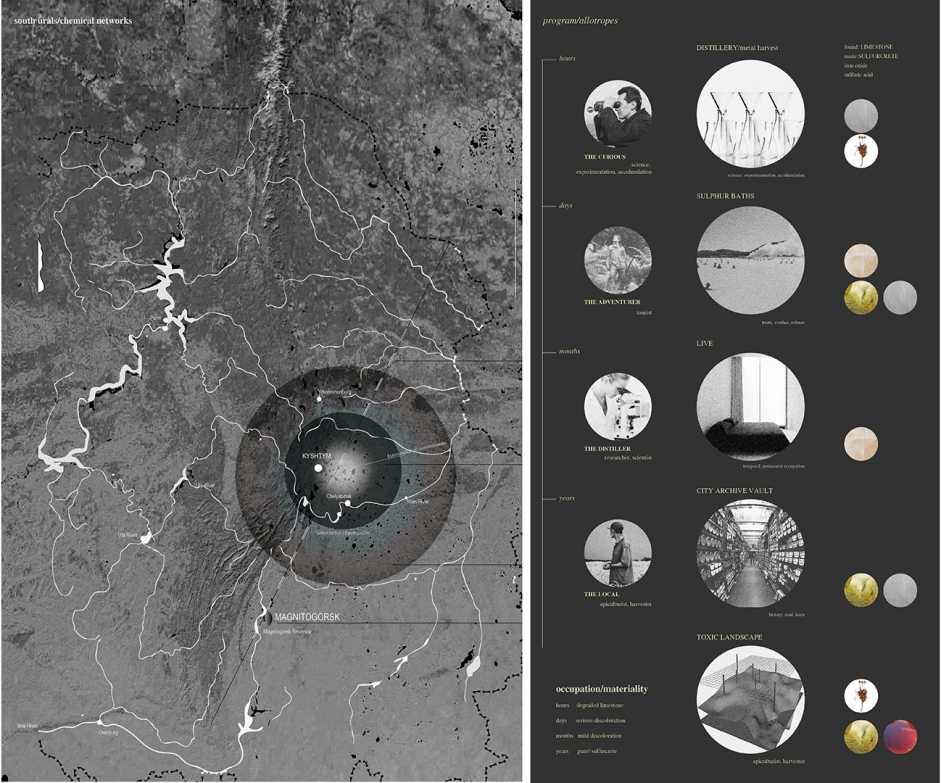 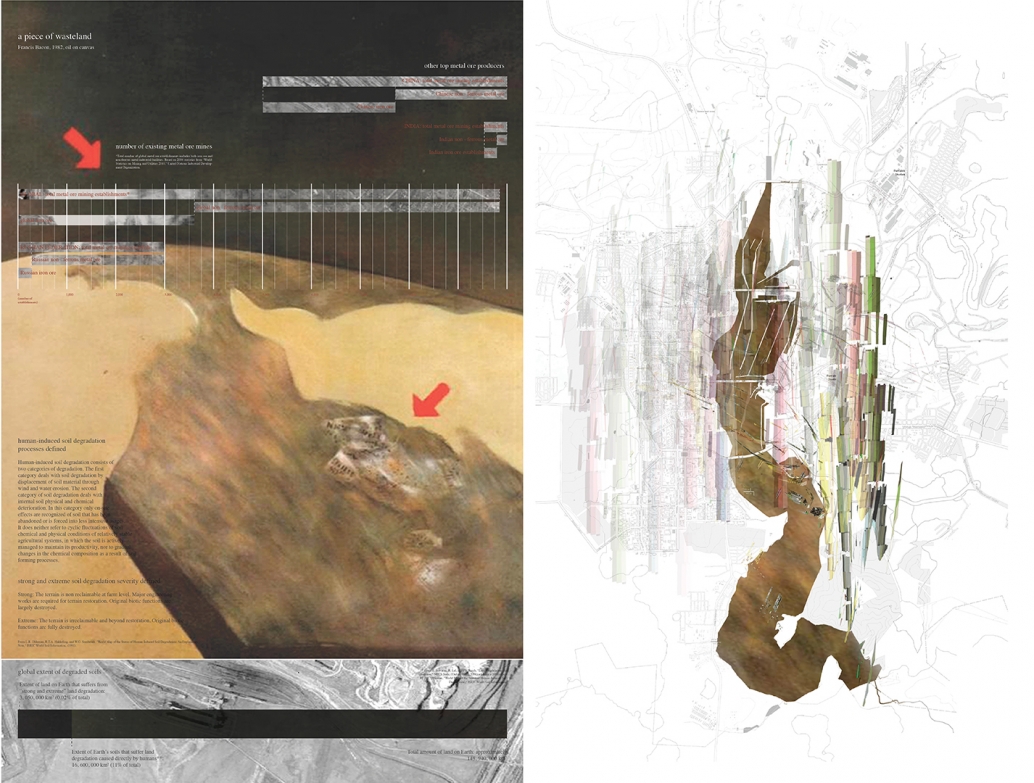 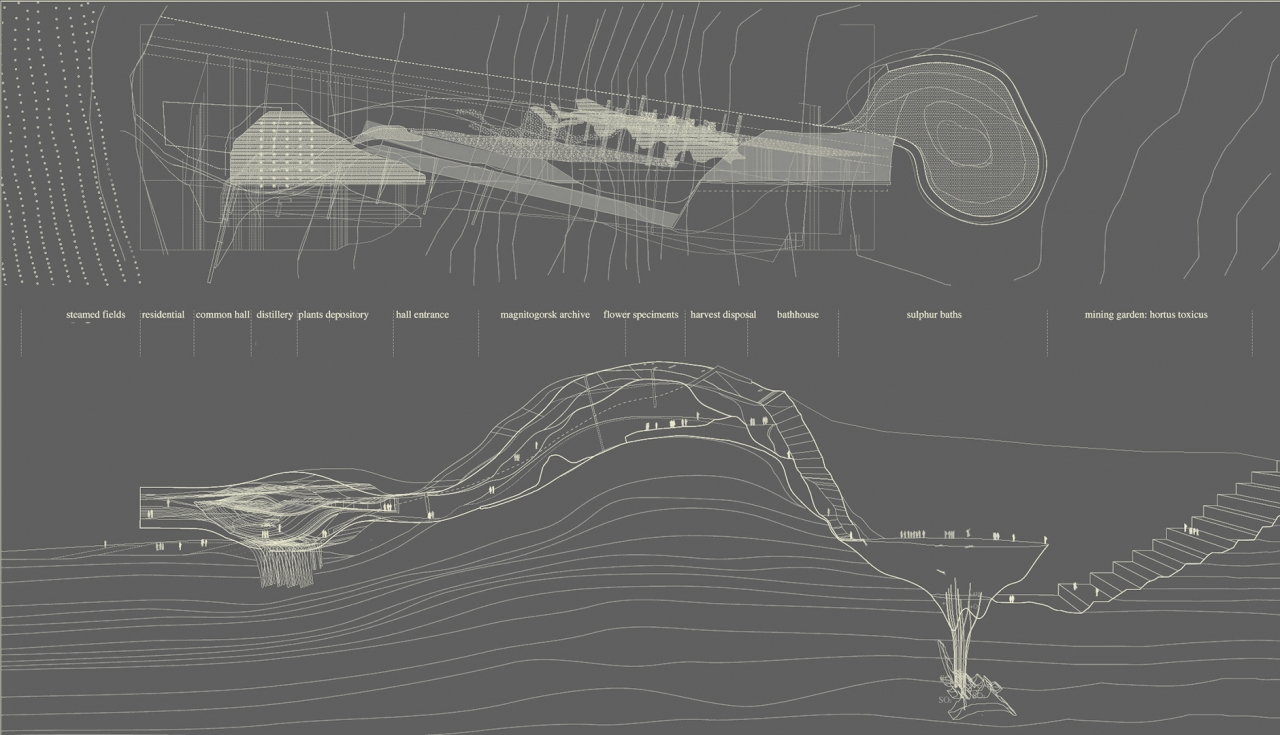 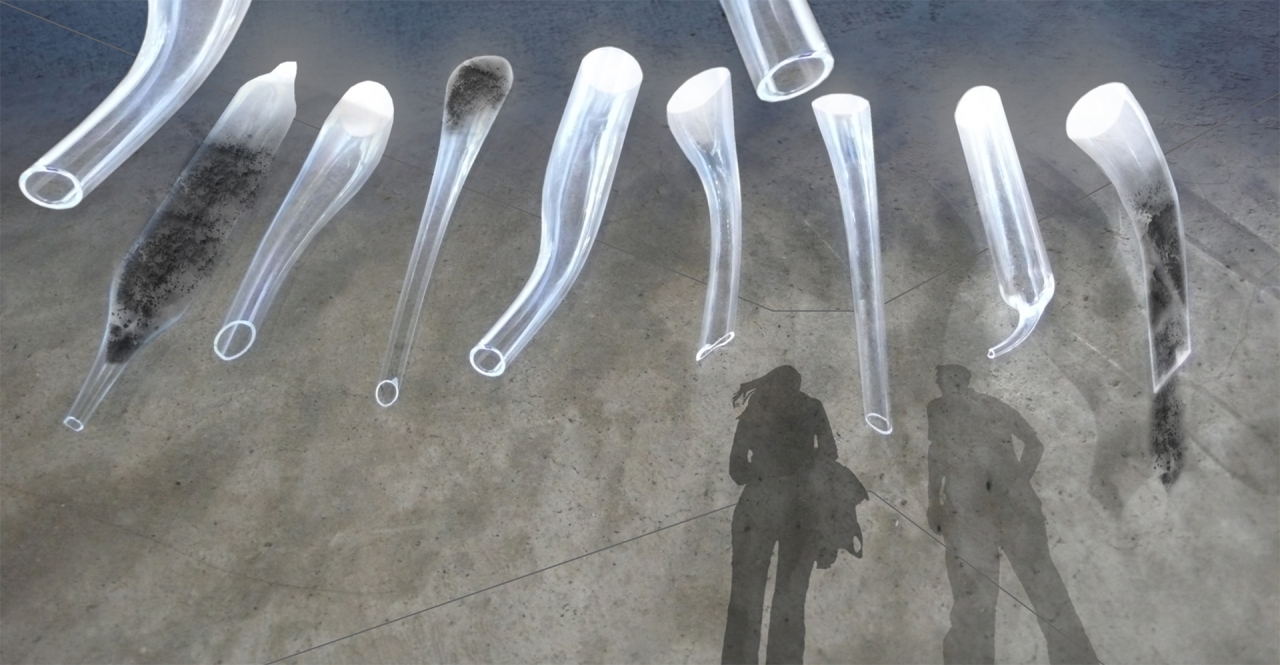 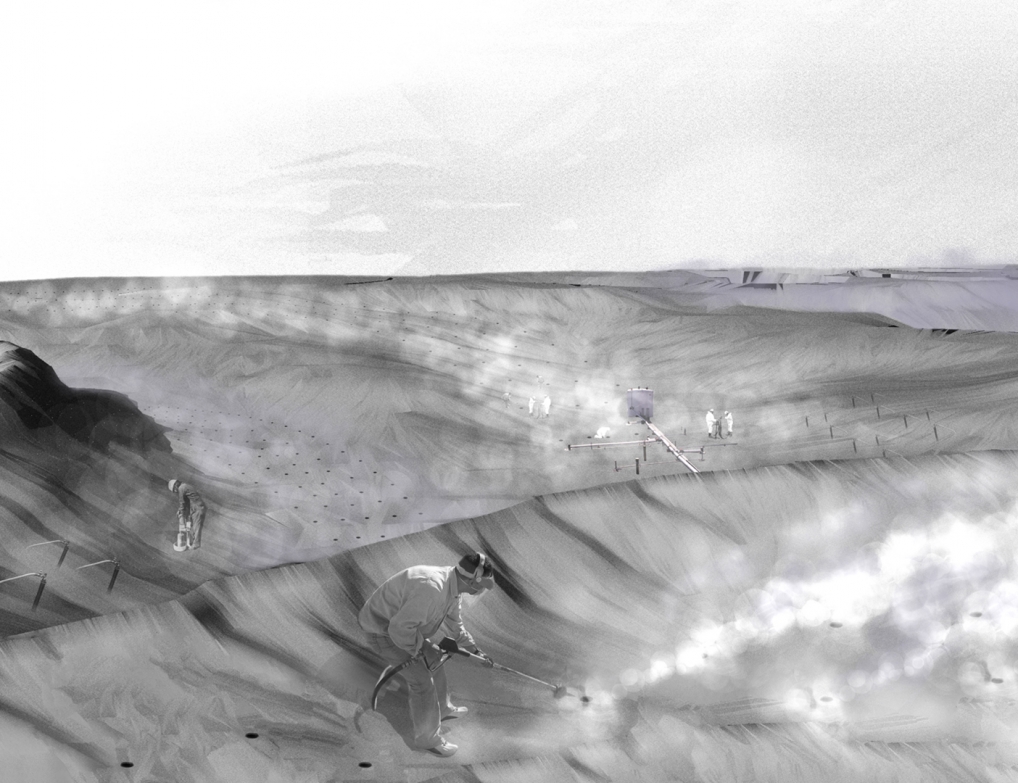 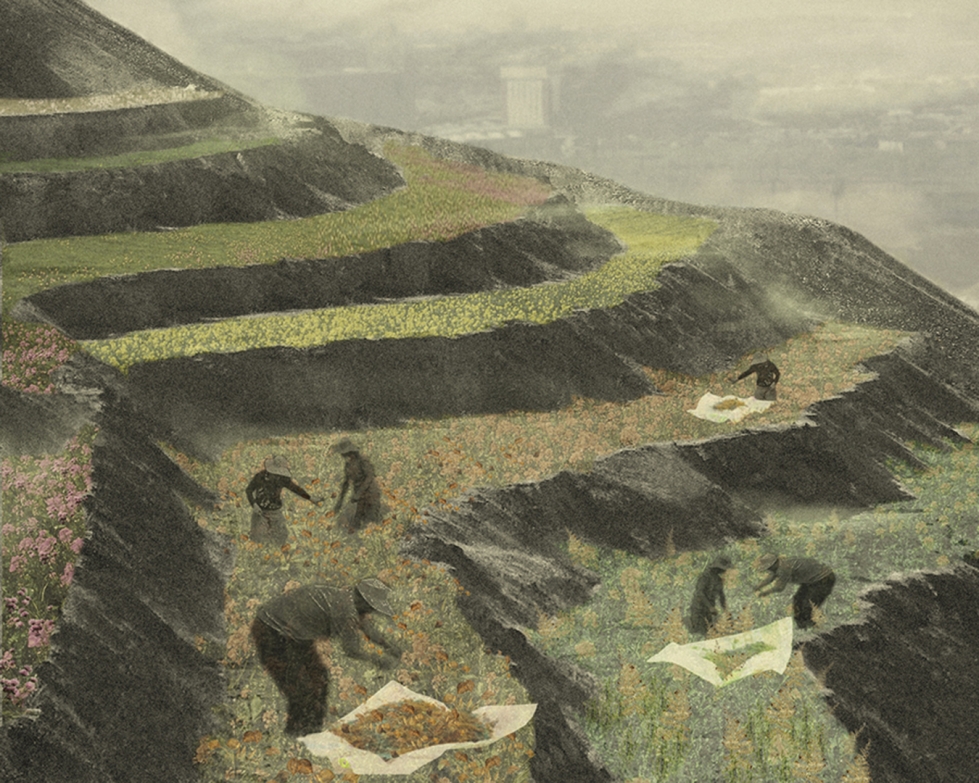 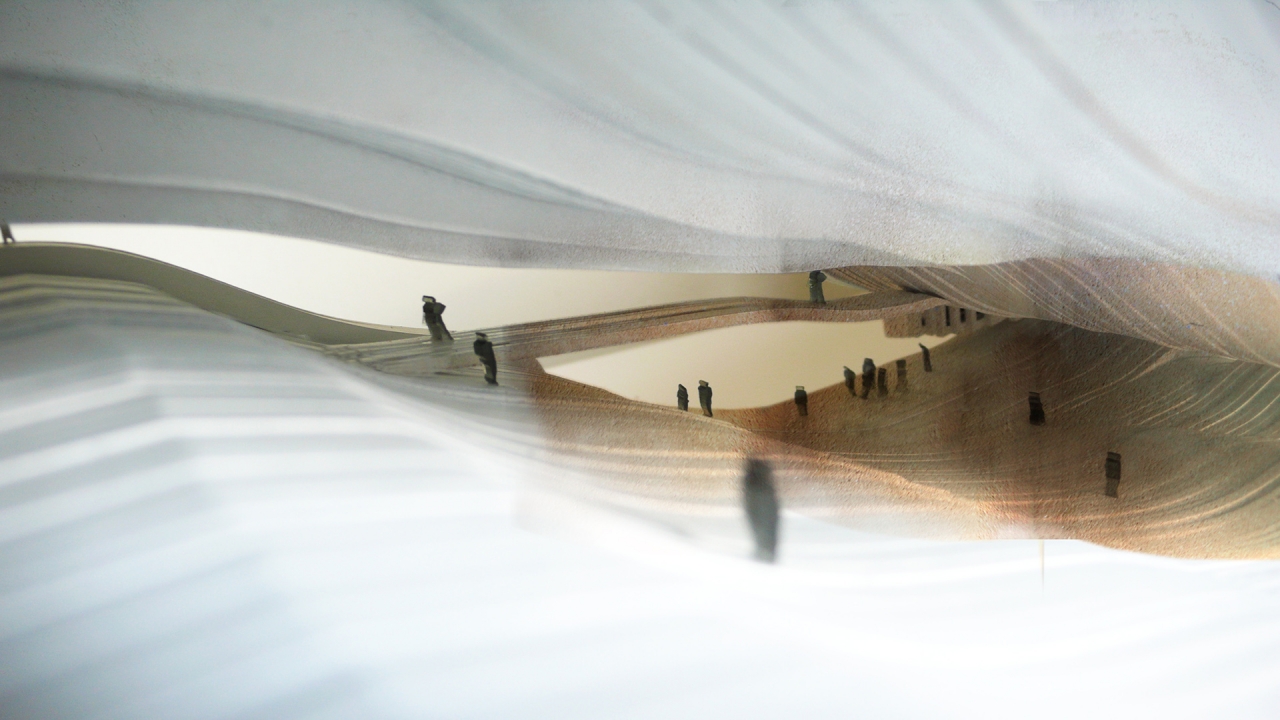 The project explores an alternative infrastructure, architectural and material proposal for the post-industrial wasteland, a territory that typically conveys the unwanted, exhausted and useless. Intense human processes, mining, chemical, industrial, have degraded eleven percent of the Earth’s soil. Magnitogorsk in the South Urals is a place that exemplifies exhaustion of resources, toxic contamination of various kinds and one of world’s dirtiest. Dark ecology utilizes programmatic, material and chemical possibilities emerging from this site giving them tectonic and technologic manifestation. The project partly remediates the existing conditions, and partly accepts them as given character of the place; it reconciles the clean with the dirty, the unwanted with the desired.

My research questions the common conception of the wasteland whereby architecture has little or no place. Inspired by Zizek’s “nature has already accepted our pollution” the project investigates the creative potential in the processes, topographies and material derivatives that constitute such terrains. The resulting infrastructure is a synergy of different systems and scales.

Magnitogorsk is a place of extremes, conveying aspirations and devastations. The South Urals region of the Russian Federation, rich in various ores, has been exploited through mining and industrialization throughout the past century. The iron ore mine, which originally sprung the architectural imagination for the new city in the 1930’s has long been exhausted, leaving the traces of the mining process in the soil and water.

Chemical processes are adopted to invent new building modes. Allotropy is the property of chemical elements to exist in two or more different forms. Using allotropy as an architectural method I propose the recurrence of a wasteland’s useless elements in programmatic and built iterations:

Lime is commonly used to neutralize acid, particularly in mining. Limestone is abundant in the Magnitogorsk region. A series of experiments utilize limestone’s natural porosity to absorb iron oxide (as pigment) from the soil. I propose limestone constructions in which spaces discolorate in various degrees, depending on their soil proximity: Contaminants flow, erode surfaces while others remain intact.

II] Mining the mine [phytomining], steaming the soil

Research in heavy metals has developed phytomining whereby particular plants or rather, weeds, have the capacity to absorb metals in their stems. Iron and lead are absorbed in these plants and then distilled. An inverted process, spatial and chemical. Via tubing steam is pumped in the land surrounding the mine (soil vapour extraction). Through time the steamed terrain becomes available for agriculture. The exhausted mine becomes an inverted garden.

The iron ores are encased in sulphites. Once released, they form sulphuric acid, a contaminant. But sulfur can be healant in baths, the minerals in the water have positive therapeutic effects, detoxifying and mucolytic.

Sulfur is a material most used for industrial applications. It is characterized by high corrosive and structural strength, sulfur is used as binder therefore no water is needed.

These chemical, elemental and material components form the proposed programs:

-Phytodistillery: after the harvest, flowers are distilled though glass tubing, the collected metals will slowly form new structures.

-Sulfur baths: sit on the former open pit mine, whereby drawing and breaking down sulfuracid, pure sulfur is released in the water.

-Structure and archive. Sulfur concrete walls interfere with the limestone for structural strength and preservation. As the limestone changes with the years, the concrete remains intact.

These concepts are synthesised into the new chemical strada, manifesting the site’s industrial history and future imagination as a geosection; where programs and materials merge and interact. Dark Ecology is aiming in reimagining the building process as well as infrastructure as time-based and chemically induced operation.