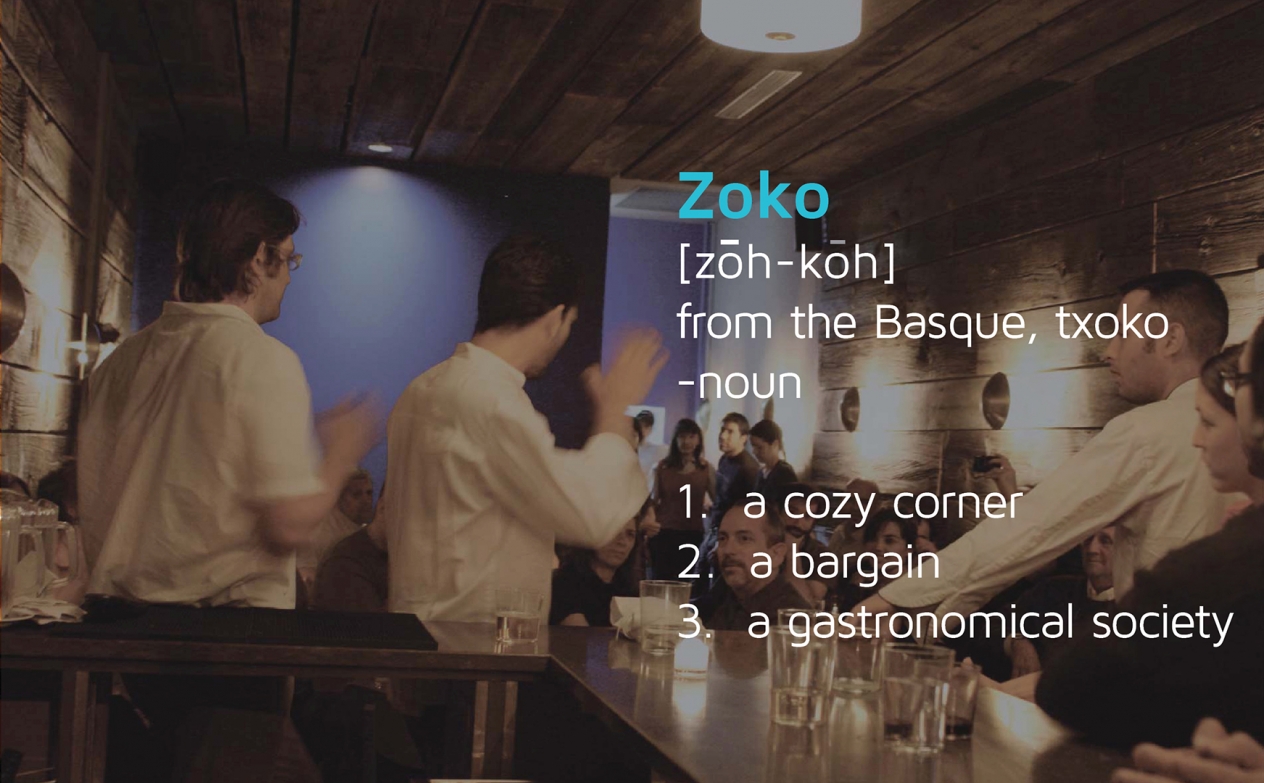 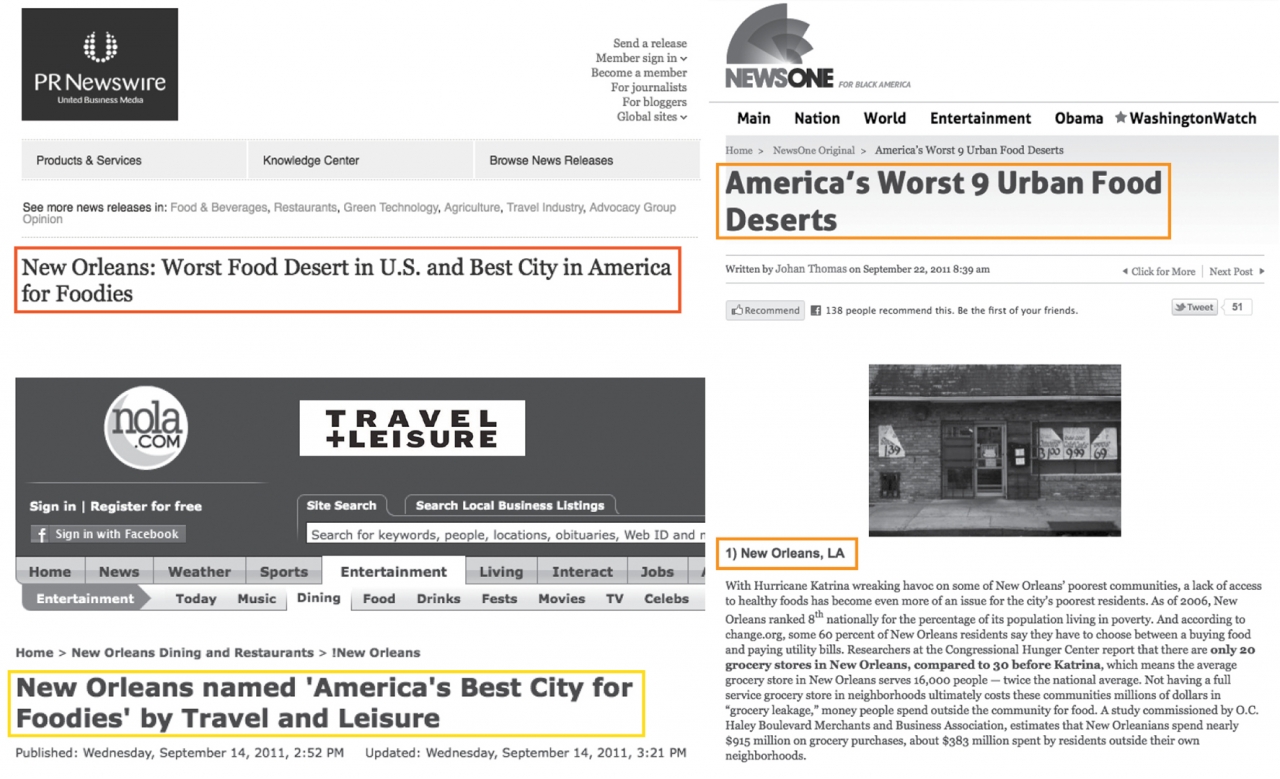 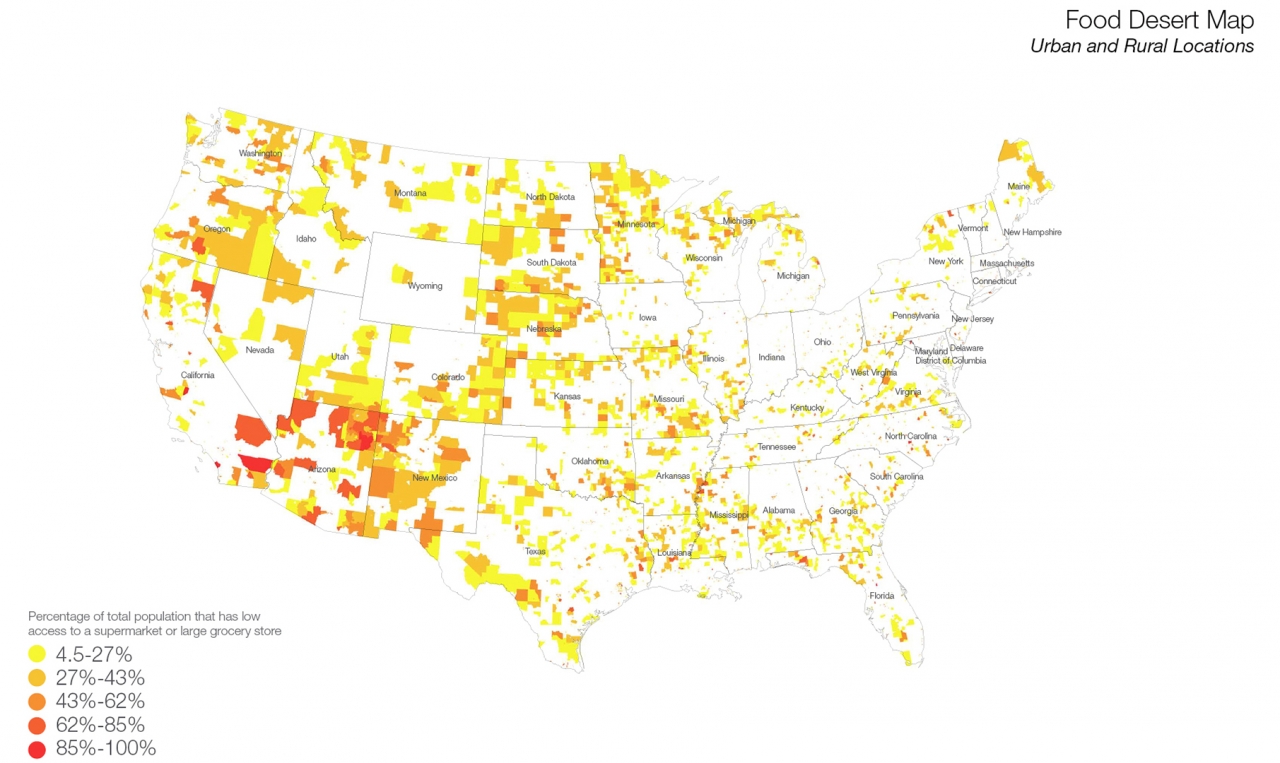 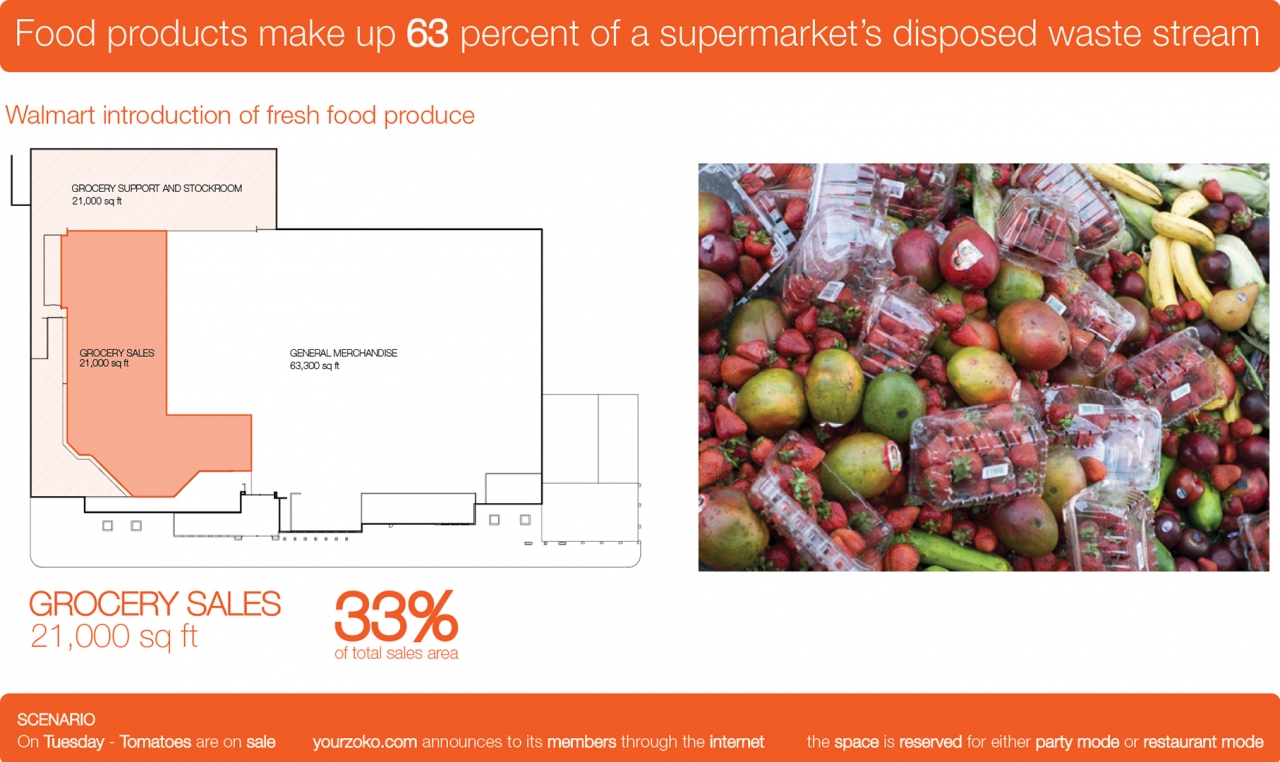 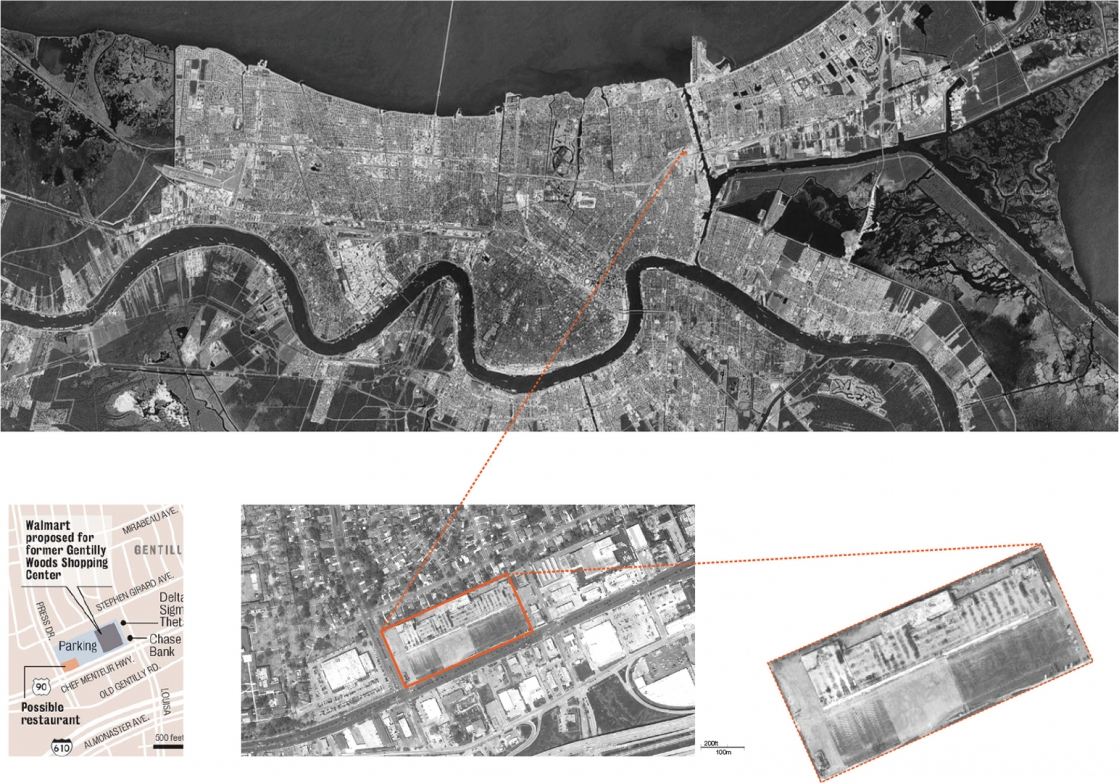 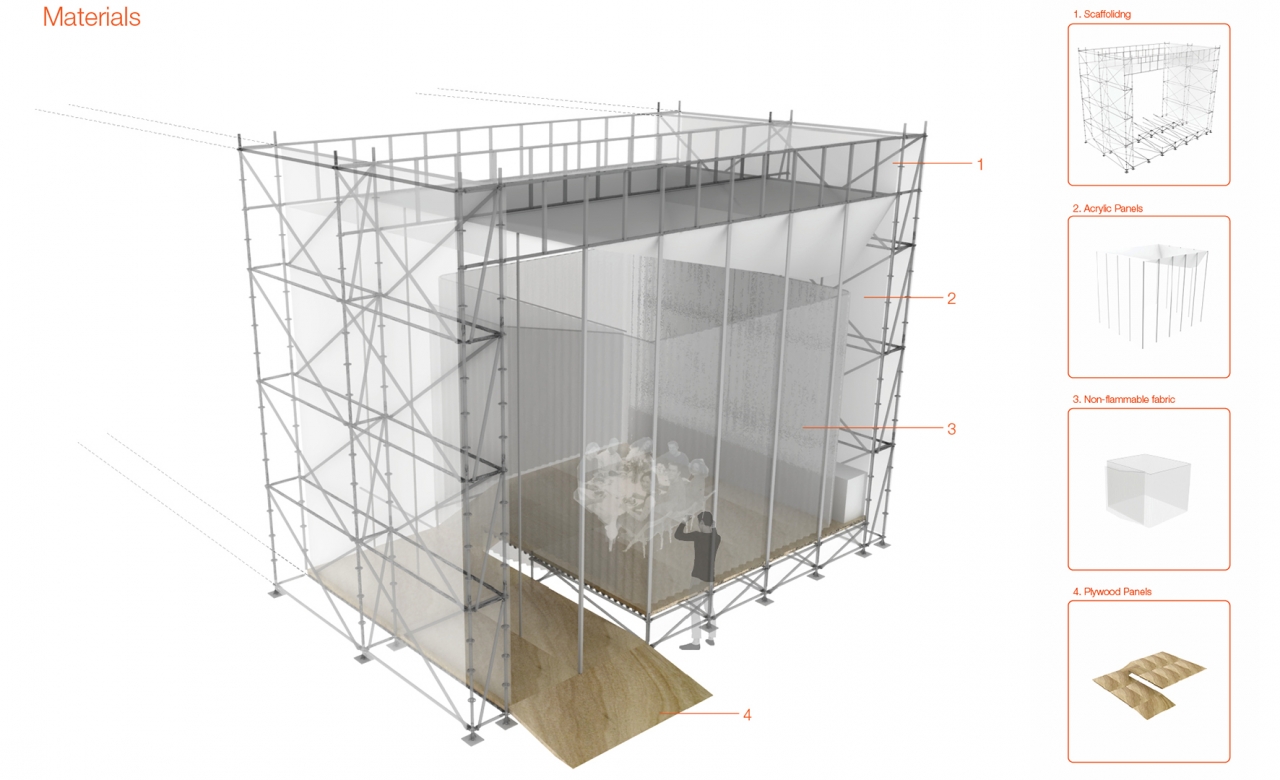 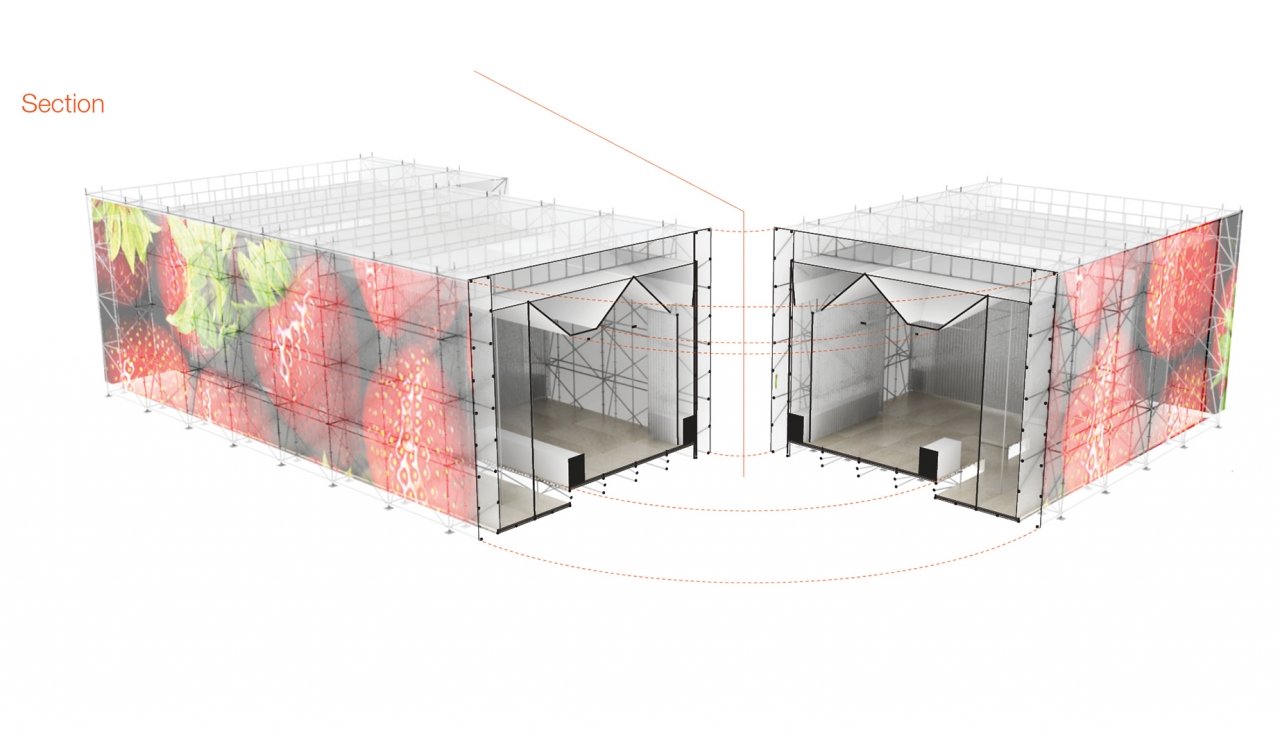 Numerous locations in the United States with lack of access to fresh food produce are known as food deserts. The economic difficulties in recent years have made food deserts proliferate due to the closure of grocery stores in certain areas of the country and thus swaying away the option for American families to have a regular healthy diet.

In relation to food deserts, Michele Obama launched the Let's Move campaign targeting to reduce the lack of access to fresh food produce by plugging into existing retailers. Among these retailers was Wal-mart, one of the largest retail company in the United States. Wal-mart has now redirected up to 33% of their retail space for fresh produce in some of its locations in the country.

The introduction of grocery products raise  other concerns such as waste production. Supermarkets produce 63% of their waste stream from unsold products, due to close-to-expiration date or simply because of the aspect of fruit and vegetables, for example, bananas with black spots are not considered to be as fresh by customers.

How to remediate this? Opposing to food deserts the on-going development of the Web 2.0 has allowed for  instant if not faster accessibility of information. In relation to food, a Web 2.0 social platform - yourzoko.com not only offers an opportunity to meet people over the internet but also to enrich the culture of eating. By consolidating the public interest for providing fresh food around the country and the on-going development of start-up companies  )such as yourzoko.com) the project seeks to use architecture as the mediator for both causes.

A scenario of utilizing the power of yourzoko.com to reach audiences and the economies of a supermarket is the following:

If tomatoes are starting to reach their end of life in the supermarket, instead of feeding them into the waste stream the supermarket will let yourzoko.com know, which will then inform the users about this bargain - the user then proceeds to the consumption of this particular produce in a restaurant or dinner party environment.

This program for the proposed project offers a series of possibilities:

A pop-up restaurant where users can open up their restaurant for a day/night without having to worry about long month tenancies.

The idea behind the architecture is the allowance of ephemeral boundaries. The boundaries are curtains that are open or closed depending on the need of the space. The fitness of the plan can be expanded from a single 400 sq ft room to a 2,000 sq ft dining room, that can hold more people,  the space can also be a pop-up restaurant a and host dinner parties at the same time, or simply just be a full restaurant.

The architecture of the web 2.0 cannot be permanent, it seeks that spot light moment. Therefore the ephemeral quality of this project.